'Ideas Cannot Be Killed With Weapons.' Why the Assassination of Syria's Most Prominent Citizen Journalist Matters

Mourners attend the funeral of Raed Fares and Hammoud al-Jneid in the village of Kafranbel in the northwestern province of Idlib on November 23, 2018.
Muhammad Haj Kadour—AFP/Getty Images
Ideas
By Prachi Vidwans
Vidwans is a research associate at the Human Rights Foundation.

A year ago, I spent an entire day with Raed Fares at the Human Rights Foundation office in the Empire State Building. My colleagues and I had learned that he was in the United States to speak at Harvard, and we decided to host a closed-door press meeting for him. We sat with him in a conference room 40 stories above New York City, writing and rewriting his remarks, translating Arabic to English, and figuring out the best way to tell his story.

He had accomplished a lot since the start of the Syrian revolution. He had recorded hours of footage of protests and attacks; he’d built a radio station; he’d used posters, a Nokia phone, and his wit to start a social movement; he’d trained hundreds of new citizen journalists, women leaders, and nonviolent protesters. He had a lot to cover.

That evening, as the sun was setting, the journalists began to arrive. We had invited 30. Only a handful showed up.

After the event, I apologized to Raed for the low turnout. He laughed loudly, as he usually did. It was what he expected, he said. In recent years, he had noticed a marked drop in interest in the Syrian conflict. Speaking opportunities that had drawn massive crowds three years earlier now enticed only a handful of people who still felt that it was their moral duty to help Syria. Reporters that had once reached out to him daily had moved on to report on other crises. He told me he was grateful to have made any connections at all. When he returned to his hometown, he sent me a gracious note thanking me and my coworkers for hosting him and promising to greet us one day “in a free Syria.”

That day will never come. Last Friday, Nov. 23, Raed was targeted and killed by his enemies in his hometown of Kafranbel in Idlib province. Fellow activist Hamoud Jneed was murdered with him. The gunmen reportedly waited in a van outside their office, pursued them, and shot when they tried to escape; they have not been identified.

Raed’s words that day have stayed with me. The Syrian conflict is nowhere near over; in many ways, it’s gotten worse. Although ISIS has retreated, extremists are still prevalent, and, according to Raed, they are recruiting. And though the U.S.-led coalition has scaled down its attacks, 2018 has seen a 34 percent increase in civilian casualties caused by Russian and Syrian assaults. Yet, the international community has increasingly withdrawn its support of Syria’s nonviolent activists. In 2017, the U.S. dramatically reduced its funding for Syrian humanitarian groups, a decision that threatened groups across Syria. In this climate, Raed—one of the few and most prominent civil society leaders still working inside Syria—struggled to win attention and support for his work.

Raed knew it would be difficult to build something new in the middle of a seemingly endless war, but he wanted Syrians to be prepared for peace when it finally arrived. Through Radio Fresh and the Union of Revolutionary Bureaus, Raed focused on laying the foundation for a free, democratic Syria. He believed that every democracy needs a free press, educated and engaged citizens, empowered women, and a vibrant civil society, and so he made it his duty to create these things from the ground up, starting in his own village. He also recognized that a generation of young Syrians had never known anything but violence and war, and were constantly being fed extremist ideologies and regime propaganda. They needed an alternative vision for what Syria could be, and how it could get there. So he worked to provide this narrative, because, as Raed put it, “revolutions are ideas and ideas cannot be killed with weapons.”

Most people who live through war tend to focus on the short-term and prioritize survival. But even when he was surrounded by chaos and destruction, Raed refused to give in to death and misery. Instead, he celebrated the potential of the Syrian people and made long-term plans to win them the freedom and dignity they deserve. He dedicated himself to doing what he could with the life he had, his eyes fixed on hope. What was remarkable about Raed was that he managed, somehow, to think about the future.

But death was chasing him. Raed’s decision to stay in Syria put his life in danger, and he knew it. In 2014, extremists from the Nusra Front tracked him and put two bullets in his right side. Undaunted, he spent four months recovering before returning to his work. Later that year, he was kidnapped by Al Qaeda militants, detained, and tortured. In the following years, extremists placed bombs in his car and harassed and abducted his employees. The Assad regime, for its part, burned down and bombarded his office. And in the end, he was killed in the same type of attack he had survived years earlier.

With Raed’s death, Syrian civil society lost an extraordinary leader and role model. But Raed had built a strong foundation for the free Syria he envisioned and there are many activists in his community that are dedicated to continuing what he started. We must support them, because, as Raed put it, “enduring peace depends on the existence of a vibrant civil society and free political discourse, a marketplace of ideas where new voices can challenge dictatorship and terrorism.”

Raed’s death comes before we have even had a chance to fully grieve for another Middle Eastern journalist, Jamal Khashoggi. Khashoggi’s murder was horrific in part because it was unprecedented and shocking. Raed’s murder is tragic, because it was expected. So many Syrians have died since 2011 that international groups have “essentially stopped counting.” But in both cases, the cause of freedom took a massive hit. We have lost two crucial and precious voices, two champions of free expression, so we urge the international community to meet Raed’s death with as much fury as it did Khashoggi’s. Let this loss inspire us to take action once more, to recommit to helping Syrians win their freedom from extremists and the Assad regime alike.

I met Raed for the first time in Norway in the days leading up to the 2017 Oslo Freedom Forum, a human rights conference that features talks by activists from closed societies. My coworkers and I had already gotten a sense of his personality through the many phone calls we had to prepare for his talk on the main stage. He was an open book from the start, constantly cracking jokes—he was fluent in gallows humor—and charming us along the way. His passion was palpable, and he knew about Syria’s revolution and war in granular detail; he’d seen the planes, he’d met the international correspondents, he’d run toward the violence to be the first to document massacres and share his footage with the world. Whenever the conversation turned dark, he’d smile, pull out a cigarette, and smoke it off. The only time I ever sensed his frustration and anger was when he was in Washington, D.C., last summer struggling to find funding for his work.

After several days of working on his talk, Raed decided that he wanted to end his speech by playing the oud, a popular, Middle Eastern instrument. Raed said that music was a universal language. So we scoured Norway to find an oud and when the day came, Raed finished his talk, sat on the stage, and created magic. For me, his performance underscored his essential humanity.

We all have a tendency to think that our heroes have something different about them, that they possess superhuman abilities, or that they do not feel fear. But that’s not the case. Raed was a person just like us. He knew the risks he was taking, but he was afraid and he didn’t want to die. He simply decided that death was a price he was willing to pay, that his dream was much bigger than his own life. 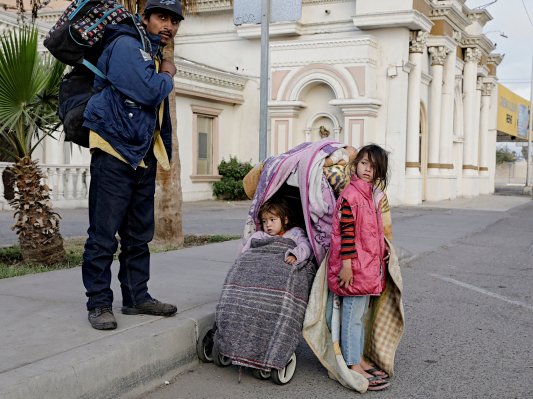 The Migrant Caravan Isn’t Causing the Border Crisis. Trump Is
Next Up: Editor's Pick