The topic is accommodations, specifically the midtown Manhattan hotel where the President of Argentina finds himself for the United Nations General Assembly, a few blocks away. His shrug says the Langham is perfectly adequate, hardly a fleabag at $645 a night. But it’s not where Mauricio Macri would be staying if he were not President.

“The Regency,” he says, with a small smile and a distant look. “Or the Plaza, beside Central Park.”

The scion of an Italian-Argentine tycoon, Macri spent his first three decades living in luxury. He studied civil engineering, with an eye toward a career in business. His first marriage was to the daughter of a race-car driver and his second to a model. But in 1991, when he was 32, a group of rogue police officers kidnapped him, bundled him into a coffin and held him in a 3-by-3-m room for two weeks until his family paid a multimillion-dollar ransom.

“That changed my view of life,” Macri, now 59, tells TIME in a hotel meeting room, empty but for an Argentine flag. “It was like I was born again. I decided to do something more than running the family business and earning more money.”

That “something more” turned out to be politics, a word historically synonymous with populism in Argentina. The country has been dominated for decades by the legacy of Juan Perón, though his second wife Eva, known as “Evita,” remains better known, thanks to the Broadway musical. The economic nationalism known as Peronism was grounded in emotion–“The masses don’t think,” Juan said, “the masses feel”–and embraced by successors including another husband-and-wife team, Nestor and Cristina Kirchner, who held office, consecutively, for 12 years before Macri’s ascension to the Casa Rosada in 2015.

But Macri, who served as mayor of Buenos Aires for eight years, narrowly won by running as an avowed capitalist, a pragmatic businessman with the connections and know-how to restore the nation of 45 million to solvency after defaulting repeatedly on international loans. Three years in, his track record is mixed: Argentina can borrow now, but its biggest lender is once again the International Monetary Fund, which in September rode to the rescue of a plummeting peso (valued at less than half of what it started at against the dollar this year) and double-digit inflation (currently running at 45%).

The Argentine public’s relationship with the IMF is long and tortured, and the loans’ austerity provisions spell trouble for Macri. Unveiling new austerity measures on Sept. 3, he admitted the previous months had been the worst since his kidnapping. “This is not just another crisis,” he said on television. “It has to be the last.”

Macri is rangy, with eyes the blue of that Argentine flag. But when we meet, he is feeling worn down by meeting after meeting conducted in English. He speaks it well after stints at Columbia Business School and Wharton, but “it takes some time to begin thinking in English again,” he says.

He will get more practice when the leaders of 20 of the world’s largest economies convene in Buenos Aires on Nov. 30 and Dec. 1. No longer the lovefest it was when globalism went unchallenged, a G-20 meeting now pulses with the uncertainty that follows Donald Trump into any gathering. Saudi Crown Prince Mohammed bin Salman is slated to attend, as is Turkish President Recep Tayyip Erdogan, who shared with other leaders the audio of Saudi journalist Jamal Khashoggi’s gruesome murder in the Saudis’ Istanbul consulate.

To that minefield add the new peril of hosting, as Justin Trudeau experienced in June. At the close of the apparently successful G-7 meeting in Quebec, Trump took offense at a seemingly routine speech by the Canadian Prime Minister, called him “dishonest and weak” in a tweet from Air Force One and pulled the U.S. out of the group’s joint communiqué.

“Things have been quite smooth and reasonable so far,” Macri says, in late September, referring to the Buenos Aires communiqué. “Even in the commerce chapter: I talk about the importance of guaranteeing multilateralism in trade. That was quite good,” he says, “taking into consideration what’s going on between China and the United States.” Trade wars are not, after all, what globalists are supposed to do.

For Latin American leaders, it’s rarely easy sharing the western hemisphere with the U.S., given Washington’s history of interfering in sovereign states. But it’s even more difficult under Trump, who has sharpened points of contention his predecessors had sanded down. His Administration resumed hostility toward Cuba, widely admired in Latin America for standing up to Uncle Sam. Trump has also threatened Venezuela with a “military option,” playing into the hands of President Nicolás Maduro, who often claims the U.S. is conspiring against him.

Asked if Trump’s sabre-rattling is helpful, Macri shakes his head. “We are trying to find other ways to stop what is going on in Venezuela,” he says. There’s real pressure. As the Caracas regime collapses, its hungry citizens are flooding the continent: according to the U.N., 3 million have fled so far. Colombia has absorbed 1 million, and distant Argentina 130,000. Their magnanimity stands in sharp contrast to the U.S. response to Central American migrants. “We really believe that they are facing the worst of the dictatorship,” Macri says of the Venezuelans. “We can open our country to host them.”

The Argentine President is up for re-election in 2019, and though the Senate approved his budget plan in November, his approval ratings are still near their lowest point thus far. Nevertheless, he seems convinced Argentina will buck the international wave that has brought populism to a long list of nations–the U.S., the Philippines, Poland, Hungary, Brazil–just as Argentina has abandoned it. “It started there, and now it’s going around the world,” he says. During his campaign just three years ago, he unveiled a statue of Perón. But Macri says his country has learned the distinction between social justice and indiscipline. “Argentines understood populism is like going to a party, drinking as much as possible. But there is a day after. So now we are convinced we need to bet again on the culture of work.”

For all their differences, Trump and Macri share considerable parallels. Both had millionaire builder fathers. Both have married three times. Both miss the Plaza (though only Trump owned it). And both enjoy performing, albeit not in the same way. The Argentine fancies himself a singer–specializing in Freddie Mercury. At his 2010 wedding to his current wife, the businesswoman Juliana Awada, Macri dressed up as the Queen front man, sporting a plastic mustache, then swallowed it during his rendition of “Somebody to Love.” He tried to keep singing but promptly collapsed. The consensus among the guests who rushed to help was that rather than trying to force it up by Heimlich, he should try to send it down. “They started making me drink, drink, drink,” Macri says, “and it didn’t work.” He took a few bites of bread, then water, and the way cleared.

Macri tells the story with enthusiasm, happy to be talking about something besides populism and the perils of the peso. “Tragedy plus time equals comedy,” he says, and brightens, realizing that another near-death experience has placed things in perspective. 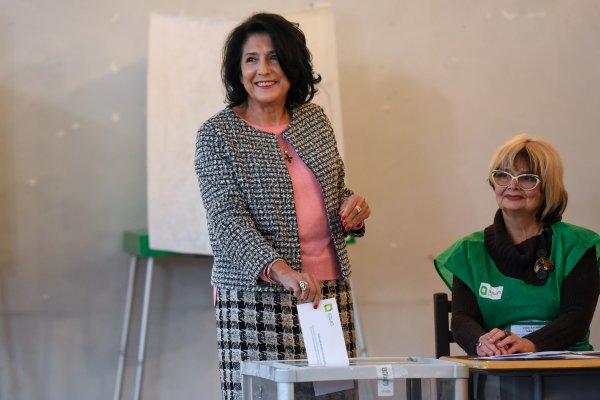 Georgia Elects Its First Female President
Next Up: Editor's Pick