6 Expert-Approved Ways to Travel on a Budget

Planning a vacation is much easier than it used to be, thanks in large part to the internet. After all, finding a hotel, flight or dinner reservation is only a quick Google search away. But traveling is still rarely a bargain.

If you dig a little deeper, you can find everything from cheap flights to low-cost lodging alternatives. Here are six ways to travel on a budget without sacrificing the quality of your vacation, according to experts.

Think about your budget while choosing your destination

There are many hurdles travelers face when planning a vacation, but experts say there’s one important detail people need to be more mindful of: their destination.

Rather than deciding where you’ll go first, then looking for flights within your budget, “take that search process and invert it,” suggests Scott Keyes, the founder of Scott’s Cheap Flights, a flight deal website. “By making price the third priority, it’s not terribly surprising that the end result is expensive flights.” If you have some flexibility with timing or the places you’d like to visit, Keyes recommends researching which of your potential destinations is the cheapest during the timeframe you are targeting.

Beyond finding a flight that won’t break the bank, you should also take into account the country’s economic state when planning your trip, says Damon Dominique, co-founder and co-host of Shut Up and Go, a travel blog and YouTube channel for accessible travel. Dominique says you should first determine what the exchange rate will be for your country’s currency. Since the American dollar is often comparable to or stronger than other forms of currency—like the euro or the Israeli shekel, respectively—it’s important to factor the conversion rate into your decision. “Use it to your advantage, while you can,” Dominique says.

The time of year you choose to travel can also affect more than just airfare, according to Jo Franco, co-founder and co-host of Shut Up and Go. If you visit on a weekend or during peak tourism season, the trip will certainly be pricier, she notes—so deliberately visiting during a destination’s off-season can help you save money. And since the most tourist-friendly places are often the most expensive, Franco suggests that visiting a smaller local town “might be better and culturally more enriching than visiting a capital city.”

Know where to look when researching cheap flights

Finding a cheap flight when planning a trip is always half the battle. And for those traveling abroad, there is usually no other option than to fly. “That’s a big part of why airfare is so stressful for travelers,” Keyes says. “Everything else about a trip has a ton more options.”

Keyes says the key to finding a reasonable flight is knowing where to look. “[Booking a flight] is almost like a shooting star that’s going through the sky. If you’re not looking in the right part of the sky at the right time, you’re going to miss it,” he says. Google Flights and Kayak are helpful tools with flexible search parameters, and can send you different price alerts for the destinations you’re interested in.

If you’re looking directly at an airline’s website, you may wind up spending more money than you intended to, according to Keyes. Because an airline’s ultimate goal is, of course, to make money, the sales that airlines widely advertise are usually not the best deals, he notes. “The airlines aren’t necessarily travelers’ allies in that sense—they’re not going to always trumpet from the rooftops when there’s a really good deal popping up,” Keyes says. Instead of booking directly on an airline’s website, Keyes suggests opting for third-party websites like Priceline or Expedia for the best travel deals. These sites will do the legwork for you by scouring the internet to find the cheapest available options.

Know when to jump on a good flight deal

“There’s a lot of pressure to make sure you’re getting the right flight,” Keyes says. And there is no telling how long a flight’s price will last—especially when an airline offers a good deal. Though your instinct may be to wait and make your decision after doing further research, there are some instances when it’s best to take the leap and book that flight immediately, according to Keyes. But as a general rule of thumb, Keyes suggests booking at least one month in advance for domestic flights and two months ahead for international flights (though you should consider planning a couple more months in advance if you’re traveling during a peak period like Christmas).

Comparing flight fare to previous trips on the same route may also help you determine whether it’s a “good” deal, according to Keyes. Still struggling? Here are Keyes’ guidelines for what he considers to be excellent airfare from the U.S., based on his experience traveling to 46 countries and years of running his own flight deal site:

Flights to Australia: $700 or below

Flights to the Caribbean: $300 or below

Flights to Central America: $300 or below

Flights to South America: $550 or below

And if you jump on a flight deal quickly, you can always take advantage of airlines’ 24-hour cancellation policies. According to the Department of Transportation, all major U.S. airlines must allow a grace period of 24 hours for travelers to make cancellations if needed. That means, if you can’t reach your travel partner quick enough or you find a better deal after the fact, Keyes points out that you could always cancel your flight later that day.

Stay for cheap—and even for free

The best way to find housing for cheap is by opting for hotel alternatives like Airbnb, Dominique suggests. Safety is a priority when traveling anywhere, but especially when choosing to rent. Airbnb vets their hosts and allows community reviews, as well as awarding premium properties the title of “super host,” so you can make an informed decision about where you choose to stay. The company also offers profile verifications where hosts can show their government-issued ID on their profile. Amy Brueckner, head of client services at CIRE Travel, a travel agency that facilitates corporate and personal trips, recommends only staying at Airbnbs that have lots of reviews, and where you feel comfortable communicating with the host beforehand.

For younger travelers looking for cheaper accommodations—especially in big cities like London, Paris or Rome—staying in a youth hostel is an inexpensive and fun way to travel, particularly because of the opportunities they offer for socializing, according to Dominique. You can find hostels online through sites like Hostels or HostelBookers, or by doing a simple Google search of hostels in your destination city. Pricing of hostels range by city and country, but they can be as cheap as $10 a night. Some hostels offer private rooms, while others have multiple bunks and communal spaces.

And if you’re looking to spend even less on lodging, Dominique and Franco say there are “endless” opportunities to stay for free. One option is through Couchsurfing, a website that connects travelers to locals’ couches (or, in some cases, guest rooms) for free. The company has put various safeguards in place—like identity verification, an on-call safety team and risk detection systems, a representative told TIME over email. Their website also has a safety guide for guests.

Dominique and Franco also suggest options like au pairing in a foreign country, or WWOFF, an international program that allows you to live on a farm (often for free) while assisting in organic farming. Because WWOFF has a small team, the program gives interested volunteers resources for conducting their own background checks and safety precautions for hosts, and a representative told TIME over email that members should use the online comments and rating systems to make decisions on where to volunteer.

Eric Hrubant, the CEO of CIRE Travel, recommends purchasing a travel insurance policy in case something does go wrong while staying at any of these shared spaces.

But if you are looking for a little more luxury and want to stay in a hotel, there are ways to maximize what you are paying for. Value-added amenities are a great way to get the biggest bang for your buck at a hotel, according to Hrubant. Try booking a hotel with perks like free breakfast, cocktail hours or utilities like laundry machines, which will allow you to cut costs elsewhere. And Hrubant says that even if these options aren’t listed online, it doesn’t hurt to ask.

If you’re staying at a smaller hotel as opposed to a chain, you can send an email or give them a call to see what kinds of perks they can include, suggests Brueckner. For honeymoons and other milestones, Hrubant says hotels will be more open to helping you have a better stay. “It’s sort of human nature that you’re going to want to reach out or go a bit overboard for a client,” he says.

You can still eat well on a budget

If eating well is a priority for your trip, there are still tons of ways to save money on meals. “Know what you want out of the vacation,” Brueckner advises. If you want to indulge in fancy dinners, you can offset that by having cheaper breakfasts and lunches. Prioritizing and planning which meals you’ll splurge on will ensure that you stay within your budget, according to Brueckner.

Franco says that staying at a hostel or hotel that includes breakfast is a simple way to save money on food. And for those who want to get a little more creative, she suggests asking locals for their tips and tricks. “The best way to figure out where the cheap eats are is to learn the language, earn the respect of the locals, and ask them where they go,” Franco says. Another easy tactic to find spots off the beaten path is to ask your hotel concierge or the staff at your hostel for suggestions, according to Hrubant.

And if you’re looking to embrace the culture of your destination while also saving money on food, Franco suggests booking an EatWith experience online, where locals give you an authentic dining experience, offering a meal that’s often cheaper than a restaurant frequented by tourists. Some EatWith events are hosted at people’s homes, so each host has to go through an application process to be listed on the site. The company also insures each guest during their event, according to its website.

And for those who are serious about sampling the local cuisine, they can always sign up for a foodie tour online.

Be flexible and make connections

Though it is tempting to plan your itinerary in advance, Franco and Dominique both say that it’s important to be flexible. Franco recommends having a list of five or fewer things that you cannot miss, while leaving the rest of your days open to spontaneity. This way, you can find fun experiences without shelling out the cash for tourist-marketed activities and events.

Connecting with locals will make your trip more memorable and exciting, Hrubant says, because you’ll learn things about the city—and find cheap adventures—that you might not have discovered on your own. “Making those human connections will basically give you a greater experience,” he explains.

And no matter how much or how little money you have to spend, making human connections while traveling has more than just financial perks. “I think it’s key to see that life is happening outside of all our personal bubbles,” Dominique says. “And in observing the cultures and customs of another place, maybe, just maybe we can understand ourselves better.” 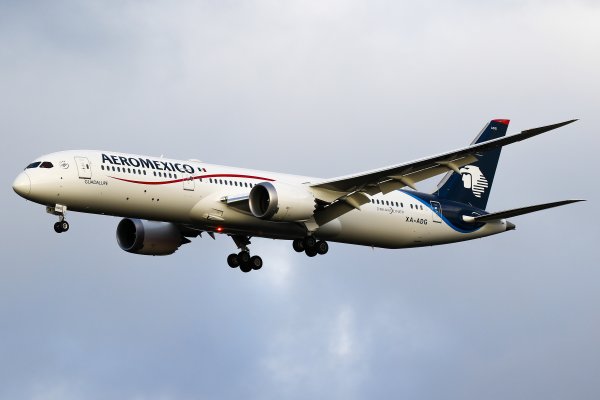 This Mexican Airline Has a Hot Take on the Border Debate
Next Up: Editor's Pick