Nancy Pelosi Cleared Her First Hurdle to Be Speaker. But Her Big Test Comes Later

As expected, House Minority Leader Nancy Pelosi cleared her first hurdle Wednesday in reclaiming the Speaker’s gavel for the 116th Congress. But her bigger challenge is yet to come.

The majority of Pelosi’s colleagues voted to advance her nomination to the House floor in January. She was elected by 85 percent of her caucus, with 202 votes for her, 32 against her, and three lawmakers leaving their ballots blank. (One lawmaker, Rep. Sean Patrick Maloney, was absent because he has been hospitalized, but he is supporting Pelosi). Her top two deputies, Reps. Steny Hoyer and James Clyburn, were elected by unanimous consent to their respective posts of Majority Leader and Majority Whip.

“We had the most unifying meeting,” Pelosi told reporters while the votes for her nomination were still being counted. “It was so inspiring to hear my colleagues place my name into nomination, once again, for Speaker of the House.”

But while Pelosi has the nomination from her party sewn up, the actual election — and the big test — for her speakership will come on January 3, when she will need to secure the requisite 218 votes across the entire House. Right now, if the current vote tally stands, she appears short of that number, with a very slim margin for error. However, there are some legislative mechanisms Pelosi can use to her advantage.

Her main opposition comes from a small group of rebellious Democratic lawmakers, including Rep. Tim Ryan, who challenged Pelosi for the speakership in 2016, and Reps. Seth Moulton and Kathleen Rice, who are refusing to back her on the grounds of facilitating new leadership. In total, 16 current and incoming members of the caucus have signed a letter urging new leadership in both the caucus and the floor, indicating they wouldn’t vote for Pelosi in either case. The signatories, however, don’t include a handful of incoming freshmen who said during their campaigns that they would oppose her, a line many have continued to maintain.

Meanwhile, Pelosi can shore up necessary support by having members vote “present,” which would lower the threshold she needs to clear the majority. It’s also possible that some of the people who voted against her on Wednesday could support her later on the floor.

“When you have a vote, you have to be able to count and you have to continue working. Nancy is a master strategist. She won’t give up,” said Rep. Joyce Beatty, who was among the lawmakers who gave a speech endorsing Pelosi Wednesday. “I put a big yes by her name and I am very comfortable she will be the next speaker.”

But the fact that Pelosi still doesn’t technically appear to have the votes has given the outliers some leverage. That was most prominently on display Wednesday, when, less than an hour into the election for Speaker, her office said she had reached an agreement on reforms with the problem solvers caucus, which included several lawmakers withholding support for her until they got the requisite rule changes they were requesting. They quickly announced they were supporting her, giving her a boost right before the nomination.

“A lot of people mischaracterize this as an anti-Nancy Pelosi group,” Rep. Dan Lipinski, one member of that group, said on Wednesday before the deal was announced. “Problem solvers are trying to come up with changes to the House rules to open up the process to make it a little more bottom up than a top down. … I think that’s what the American people want to see happen so we will see if we get there.”

Rep. Brian Higgins, who initially signed the letter calling for new leadership only to flip and back Pelosi, said the holdouts should use their position as leverage for achieving policy objectives. “I’m certain that over the next thirty days, the folks that are withholding their support will have leverage they’ve never had before,” he said.

But Pelosi clearly has no interest in applying her deal-making skills to the one thing her most outspoken detractors want so badly to see: new leadership.

Rice, Ryan and Moulton met with Pelosi on Wednesday before the Speaker vote. Moulton said the meeting was at Pelosi’s invitation, but an aide familiar with the events said Moulton requested it to discuss the possibility of a transition plan, only to be, in Rice’s words, “dismissed outright.”

“We remain united behind our goal of new leadership and intend to vote against Leader Pelosi in Caucus and on the Floor of the House,” Rice said in a statement.

Pelosi herself has floated the idea of being a “transitional figure,” although she has given few details about what that actually means. And the election of Rep. Hakeem Jeffries to caucus chairman was viewed as a positive for ushering in a new generation of leadership, as he is often touted as a possible Pelosi successor. “If the case is that there is no transformation of leadership that is now being eviscerated with [Jeffries’ election],” said Rep. Eric Swalwell.

Swalwell is among the Pelosi allies who said it doesn’t make sense to outline a succession plan. “I don’t think any effective leader puts any expiration date on their leadership,” he said.

Even Higgins, who had encouraged outliers to use their leverage, said they shouldn’t harness it for that purpose. “[Pelosi] has been here longer than she will be here,” he said. “Why would we as a caucus want to make her a lame duck?” 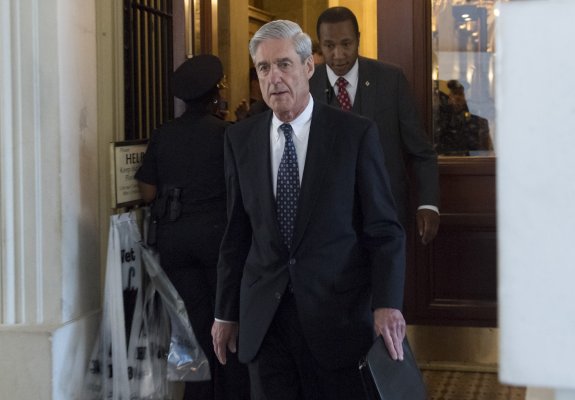 How a Fight Over the Border Wall Could End in a Showdown Over Robert Mueller
Next Up: Editor's Pick