‘I’m Showing Trans Women Can Be Whatever They Want to Be.’ Meet Miss Universe’s First Transgender Contestant

Five months ago Angela Ponce beat out 22 other Spanish beauty queens to be crowned Miss Spain 2018. Now, the model and activist is set to make history at Miss Universe in Thailand.

In December, she’ll become the first transgender woman to take part in the international competition, six years after then-owner Donald Trump scrapped a ban on trans contestants. As she prepared to travel to Bangkok, she spoke to TIME about pageants, the U.S. president and her journey.

On Dec. 16, you’ll become the first transgender woman to compete in the Miss Universe pageant. How did you get there?

It wasn’t easy. In 2015, I competed in another pageant, Miss World, in Spain, but I found out on the day of the competition that their rules didn’t allow a transgender woman to win. It crushed me. I had to go on and perform, and it felt horrible. But after I got to the Miss Universe final, Miss World changed their rules too. I changed the rules.

What’s your favorite part of the pageant?

I love the evening-gown portion. I don’t know what I’m going to wear yet. We want it to be a magical moment. The only part I’m dreading is lugging five suitcases to Thailand alone.

How do you respond to those who say that pageants are sexist or outdated?

None of the contestants are forced to be there. I’m competing because it’s what I’ve wanted to do since I was a little girl. I’m showing that trans women can be whatever they want to be: a teacher, a mother, a doctor, a politician and even Miss Universe.

Donald Trump, the former owner of Miss Universe, didn’t allow transgender contestants until 2012 and has threatened trans rights since becoming President. If you get the crown, would it be a rebuke to him?

More than a message to him, it would be a win for human rights. Trans women have been persecuted and erased for so long. If they give me the crown, it would show trans women are just as much women as cis women.

If President Trump were still the owner, would you compete?

I would. I like to think that most people who don’t understand me, it’s not because they’re bad people. It’s because no one taught them about diversity. What you don’t talk about doesn’t exist—even though trans people have been here since there were people on earth.

Did you experience that invisibility growing up in a small town in southern Spain?

At school no one knew what to make of me. It was hard. But school is like that for many people: other kids got picked on for their weight or because they wore glasses. Spain is actually a leader on gender issues; we’re one of the best countries in the world in terms of female representation at the top of politics. But there’s a way to go: transgender people still don’t have a legal right to their identity until they’re 18.

Were things better for you when you became a model at the age of 18?

The fashion industry likes to talk about freedom and creativity. But many times I’ve gone to a casting and they’ve given me the job, and then later my agency calls and says they’ve changed their minds, because they’ve found out I’m a trans woman. I would just burst into tears.

In November, the Victoria’s Secret CMO said he wouldn’t want transgender models in the lingerie brand’s flagship show. (He later apologized.) What would you say to him?

I’d say that if trans women can’t walk in Victoria’s Secret shows, then they should put a sign on all their storefronts saying: No trans women. If they don’t want us to model for them, they shouldn’t want us to buy their products. That implies I’m just a man dressed as a woman.

Are you nervous about competing in front of spectators from countries that have less progressive ideas about the trans community?

No, because I’m not trying to impose anything on anyone. I’d never try to change anyone’s culture or way of life. But by competing I’ll make trans people more visible for everyone, which is a big step. I’m not nervous. I’m excited. 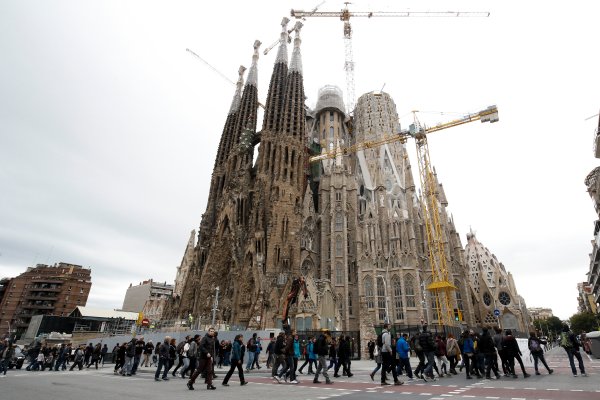 Sagrada Familia to Pay Barcelona 136 Years Worth of Fees
Next Up: Editor's Pick