The Story Behind the Photo of a Family Running From Tear Gas at the U.S.-Mexico Border

A migrant family, part of a caravan of thousands traveling from Central America to the United States, run away from tear gas in front of the border wall between the U.S. and Mexico in Tijuana, Mexico, on Nov. 25, 2018.
Kim Kyung Hoon—Reuters
By Tara Law

When U.S. border agents fired tear gas at migrants attempting to cross through a barbed wire fence at the U.S.-Mexico border on Sunday, a single photo became a widely shared symbol of the crisis.

The image shows a mother dragging her daughters away from gas canisters shot at them from the American side of the U.S.-Mexico border near Tijuana. The two children are both in diapers. One is barefoot, and her tiny feet look fragile on the grey and rocky ground.

Veteran Reuters photographer Kim Kyung-Hoon tells TIME that he had been photographing the caravan, including some of the 5,000 people camped out at the border, for about two weeks when he captured that emotional shot on Nov. 25.

At around 10 a.m. Kim was at a shelter in Tijuana when he noticed that many of the migrants were making a move toward the border. He decided to follow them.

Kim walked along with about a hundred migrants, including many women and children, as they made their way across a shallow river and up a slope to the border fence.

Everything shifted, he says, when he got about 10 feet from the border. He watched as two men crouched beside the fence and tried to dig underneath. One of the men dug with a plastic cup and the other clawed at the ground with his bare hands. Suddenly, Kim says, the U.S. border guards shot canisters of tear gas at the migrants, and the crowd started to run away from the border. Kim captured the chaos with his camera.

The Mexican government said in a release that about 500 migrants had attempted to cross the border, though U.S. Customs and Border Protection put the number at 1,000. U.S. Customs and Border Protection Commissioner Kevin McAleenan told the Associated Press that Border Patrol’s existing policy permits the use of tear gas and other non-lethal methods, but said that the incident will be reviewed. Border patrol arrested 69 migrants who had crossed illegally into California, he said.

Kim does not speak Spanish, but other Reuters photographers were able to catch up with the family in the migrant camp later that day. They learned the children are 5-year-old twin girls, Cheli and Saira Meza, and their mother is Maria Meza.

Meza told Reuters that the family is fleeing violence in their home country, Honduras. Meza is also traveling with her three other children, including her 13-year-old daughter, Jamie, who was running behind them in Kim’s photo. They hope to reunite with her husband, who is in Louisiana.

Meza said that she fell to the ground after the canisters were fired, and that a young man had to help her get to her feet. She said that she was shocked that border patrol would fire tear gas at women and children.

“I thought I was going to die with them because of the gas,” she said, according to Reuters. She added, “If they close the border I ask God that here in Tijuana, or in another country they open doors to us, to allow me to survive with my children.”

Kim says he often asks migrants why they have left their home countries, and “everyone answers the same thing: They are looking for a better life.”

Kim admits he was surprised to learn that the photo had been shared so widely, but says that he knows it is powerful because it “tells a story.”

He adds that he does not want to tell people how to feel about the photograph, but hopes that it will bring the situation at the border greater attention: “I just want to show what is happening here to another part of the world.” 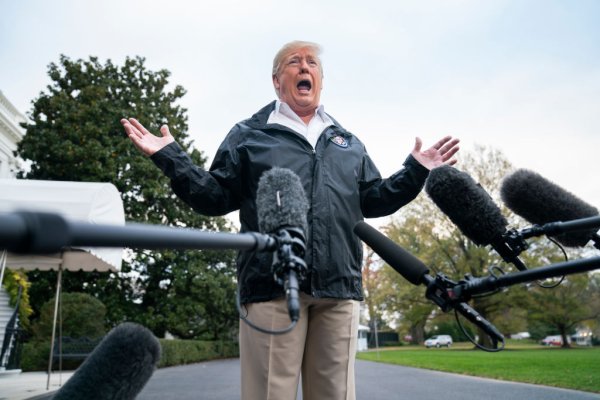 Trump Threatens to Close Border With Mexico 'Permanently'
Next Up: Editor's Pick