'Taking Nothing for Granted.' Why Republicans Are Watching Mississippi's Run-Off

Ahead of Tuesday’s run-off between appointed incumbent Republican Sen. Cindy Hyde-Smith and former three-term Democratic Congressman Mike Espy, national and state GOP officials were keeping a close eye on the state. More than 100 paid Republican National Committee staffers were on the ground. Activists and aides have made more than 500,000 phone calls since no candidate ended Election Day on Nov. 6 with a majority, leading to the forced run-off.

“The RNC is taking nothing for granted,” party strategists said in a memo circulated Monday.

After all, if we’ve learned anything in the age of President Donald Trump it is this: anything can happen and with little warning.

In most years, Mississippi’s Senate race would have earned an indifferent shrug in a deep-red state. In many ways, it still deserves that approach, from a cold-eyed perch — which is odd, considering just how many headline-worthy side-plots are afoot.

There’s the white Republican nominee, who said she would sit in the front row for a “public hanging” — a charged remark in a state with a brutal history of lynching — then offered a partial “for anyone that was offended by my comments” apology. The black Democratic nominee, meanwhile, is the subject of a barrage of ads bringing up his 1997 indictment — but not his 1998 acquittal — on charges related to accepting improper gifts from food companies while working as President Bill Clinton’s Secretary of Agriculture.

And, of course, President Donald Trump planned a pair of unscripted election-eve rallies designed to goose his supporters in a state he carried in 2016 with 58% support.

At his first of two rallies, Trump brought out his greatest hits that are sure-fires with his base: immigrants are flooding the United States illegally and taking Americans’ jobs, Democrats want to destroy the social safety net to fund single-payer health care, and liberals want to block the President’s nominees for the courts. For good measure, Trump made a point of singling out Democratic Rep. Maxine Waters of California, who is African American, as a representative voice among Democrats and questioned how Espy thinks he can win in the state.

“He’s far left. Oh, he’s out there. How does he fit in with Mississippi?” Trump asked his crowd in Tupelo, Miss.

Mississippi is one of those states that always tempts out-of-state Democrats into thinking there’s a chance. When Espy got within 8,500 votes of overtaking Hyde-Smith on Nov. 6, Democrats briefly saw opportunity — until strategists in the state noted that more than 146,000 voters cast ballots for a second Republican on the ballot, tea party favorite Chris McDaniel. Because no one got 50% of the vote, McDaniel was cast aside and a head-to-head contest between Hyde-Smith and Espy was put on the calendar. Those McDaniel voters are unlikely to throw their support to Espy. And there is no reason to believe the same voters who showed up on Nov. 6 will be the same ones who show up on Nov. 27.

And then there’s history. Mississippi has not elected an African-American statewide in more than a century. The last Democratic presidential nominee to carry the state was Jimmy Carter in 1976. The last Democratic Governor of the state left office in 2004. Three members of the four-person House delegation are Republicans.

There are, of course, reasons why Democrats think they stand a shot. For one, Mississippi has never elected a woman to serve in Congress. (Hyde-Smith was the state agriculture commissioner until the state’s Republican Governor appointed her to fill the vacancy created when Sen. Thad Cochran stepped aside for health reasons.)

At the same time, Democrats have fared better than Republicans in oddly timed — a.k.a., non-Election Day — voting. Next door, in Mississippi, voters delivered a surprise victory to Democratic nominee Doug Jones in a special Senate election in December of 2017. (The Republican nominee, Roy Moore, was dogged by allegations of sexual impropriety with young women and girls, charges he denied.)

And Hyde-Smith has done herself few favors among African-Americans, who make up about 37% of the state’s population. (In Alabama, where Jones won, that figure was 26% of the population; Jones carried 96% of the black vote in his unlikely win.) The Jackson Free Press last week published a photograph and story it said showed a sophomore Cindy Hyde attended a segregated academy founded after the Supreme Court ordered the desegregation of public schools. The Free Press also reported Hyde-Smith’s daughter attended a similar segregated school. And on the eve of Election Day, nooses appeared at the state Capitol. Police were investigating the motives in a place where the state flag still features the Confederate stars and bars.

Since Nov. 11, when Hyde-Smith’s comments about “hanging” became the talk of the race, national Republicans sent more than $3 million to defend Hyde-Smith, according to the nonpartisan Center for Responsive Politics. Meantime, donors such as Walmart and Major League Baseball asked Hyde-Smith to return their political donations.

Democrats weren’t ready to surrender. Senate Majority PAC, a group aligned with national Democrats, has spent more than $800,000 since Nov. 11. Potential 2020 hopefuls Kamala Harris and Cory Booker both dropped into Mississippi. After all, the state may offer a chunk of treasured delegates should the Democratic Party arrive at its convention in July of 2020 without a foregone nominee.

Numerically speaking, the stakes this week are relatively low. The balance of power in the Senate will not tilt either way. Republicans are set to have a majority in the Senate when the 116th Congress is gaveled into session; the question is whether it is with 52 or 53 seats. And Senate Majority Leader Mitch McConnell will have sole control over the Senate agenda whether Hyde-Smith or Espy is in the chamber.

Still, an African-American Senator from Mississippi would be a reason to buoy Democrats’ hopes about tilting the South, or at least holding their own. The message it would send to Trump — whose face is plastered on Hyde-Smith’s bus — would be unmistakable. And there’s no telling how the President may react.

After all, Trump himself is the proof that anything can happen, at any time and with little warning. 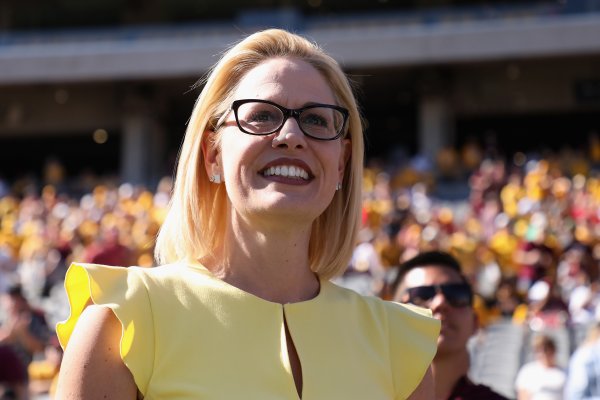 Arizona's Kyrsten Sinema Flipped a GOP Seat in Overtime
Next Up: Editor's Pick