'It's About Right and Wrong.' In Conversation With the Journalist Who Exposed the World's Biggest Corruption Scandal

On the morning when I first met Clare Rewcastle Brown, the British journalist known for breaking wide one of the biggest-ever corruption scandals to involve a head of state, she casually mentioned we were being followed. We were taking part in a rally snaking through London’s Trafalgar Square when she noted the “dodgy looking fellow.” At the time, being stalked through central London was not unusual for Rewcastle Brown. It was November 2016 and the mother of two had already seen her life transformed by her investigation, which prompted death threats and selfie requests in equal measure, though it had yet to wreak the international consequences apparent today.

Rewcastle Brown, 59, had been shining a spotlight on environmental destruction in her birthplace, Sarawak, Malaysia, when she uncovered a trail that eventually exposed billions of dollars being siphoned from a state sovereign fund known as 1Malaysia Development Berhad (1MDB). In all, U.S. Department of Justice investigators believe more than $7.5 billion was embezzled from the fund and spent on items such as Van Gogh paintings and luxury yachts. The sensational fallout from 1MDB has implicated members of leading financial institutions like Goldman Sachs and JP Morgan, led to a change of government in Malaysia and spawned international criminal charges for figures like the playboy financier and The Wolf of Wall Street producer Jho Low.

For Rewcastle Brown, blowing the whistle on 1MDB has come with enormous repercussions. After more than three years of vilification and harassment, during which she was banned from Malaysia by the former prime minister, she was finally allowed to return. Just this week, she was hit with a defamation lawsuit prompted by revelations in her new book on 1MDB, The Sarawak Report.

On a recent trip to Hong Kong, I caught up with Rewcastle Brown two years on from our first meeting.

What do you think the 1MDB scandal says about globalization and the regulation of international financial institutions?

I very rapidly realized that I had gone from a grassroots cause [environmental degradation in Sarawak] to possibly the most pressing and dangerous global issue of our times, which is capitalism gone absolutely rampant. This is not about politics, or about right and left — it’s about right and wrong. We are allowing the worst criminals on the globe to hide all their money and then redress it as if it’s respectable in our developed economies. A super rich elite have emerged thanks to the lack of law and order, and thanks to the lack of jurisdiction over the transfers of international wealth.

The Malaysian government went to great lengths to discredit and intimidate you. Could you speak about some of those experiences?

If a government is overreacting in this way and treating you as such a dangerous threat, then you know that you are doing your job.

What had turned from a slick financial operation became real criminality when these people were put under pressure. Suddenly people were being murdered and falsely imprisoned … There were attempts to frighten me as well with people with crew-cuts following me around. Suddenly you see their real side. Gone is the slick business suit and behind it is the ugly, snarling reality of run-of-the-mill criminals.

Why do you think your sources chose to trust you, despite the great personal risk to themselves?

I think people knew why I was doing what I was doing. They knew I wasn’t part of an interest group. And, in a way, by attacking me, the Malaysian establishment identified me as someone who was principled and prepared to stand up to them. People knew I was doing this because I cared, perhaps because they knew I had been born there.

Read more: The Accidental Whistle-Blower: How a Retired London Journalist Uncovered Massive Corruption Half a World Away

Your book ends with the stunning election upset earlier this year of Mahathir Mohamad and the Pakatan Harapan coalition. How big an impact do you think the revelations of 1MDB had on the elections?

To me, it was a complete vindication of why we have to have free journalism and a proper democratic process. Through 1MDB I was able to bring the reality of what was happening in Malaysia to people, and 1MDB was the key platform Mahathir used. The nation trusted him. He was an old battle-axe and a strongman, and had several unpleasantly authoritarian tendencies, but everyone trusted in his basic integrity and his concern for the nation. 1MDB proved just how off the scale Najib and his wife’s corruption was, and how dangerous it was.

Supporters of 'Pakatan Harapan' (The Alliance of Hope), wait for Mahathir Mohamad to be sworn in as Malaysia's prime minister on May 10, 2018 in Kuala Lumpur, Malaysia.
Ulet Ifansasti—Getty Images

As the scandal of 1MDB continues to unfold, what do you think will happen next?

It’s just gotten bigger and bigger. In the process of investigating this case, the U.S. Department of Justice has shown exactly what everyone suspected, which is that the offshore system is harboring outrageous criminality and money laundering on a jaw dropping scale.

I disapprove of the analysis that Jho Low was special and that he pulled off something amazing, because I think he was just one of many. It’s a rare test case so far, as it opens the thread into a network of criminality, and it helps people understand what is clearly going on everywhere. This money goes into this network, and you find that you are touching everybody. Dozens of banks have been caught up in all of this, dozens of institutions and dozens of malpractices. There’s the network of lawyers ‘to go to’ for these things; the ‘to go to’ accountants; the ‘to go to’ incorporators; the ‘to go to’ politicians — so many of them have been flagged up in just this one case.

There are so many nooks and crannies that haven’t yet been looked into, and it will be interesting to see whether the diplomatic pressures kick in. There are still certain areas of this scandal that have not really been pursued. 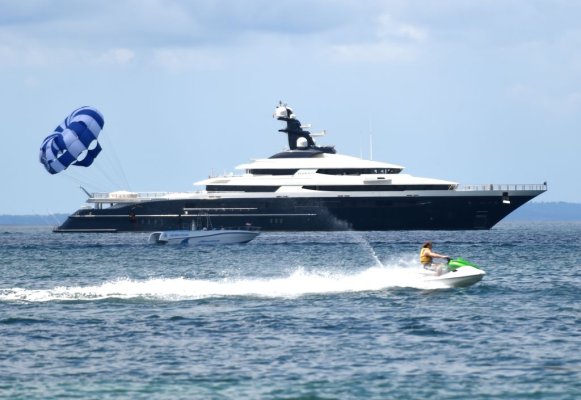 Last Chance to Bid on Yacht Seized From Malaysian Fugitive
Next Up: Editor's Pick