A cyclist rides by a poster depicting the European Union's flag within a blue star covering the face of President Donald Trump, and text reading, "This time, I will register and I will vote," on Nov. 21, 2018, in Strasbourg, France.
Sebastien Bozon—AFP/Getty Images
By Laignee Barron

The specter of President Donald Trump is being used to spur the French electorate into registering to vote ahead of polls for the European Parliament next year.

Trump’s face, overlaid with a star-shaped yellow and blue European Union flag, appeared on posters throughout the northeastern city of Strasbourg on Wednesday, Agence France-Presse (AFP) reports. “This time, I will register and I will vote!” the placards say.

The head of communications for Strasbourg, Jean-Francois Lanneluc, defended using the likeness of America’s 45th president to encourage voter registration.

“When you launch a campaign you want it to be noticed, there has to be an element of surprise. Here, you have that and it has not gone unnoticed,” he told AFP.

With the EU’s May 2019 election veering toward a match-up of populists against moderates, Lanneluc said Strasbourg’s provocative “get out the vote” twist is catching the eye of other French towns. Several, he said, have asked to use the image.

“Europe remains a sort of model against the temptation of isolationism, which Trump embodies,” he said.

The last European Parliament elections in 2014 saw historically low voter turnout, averaging at 42.61% across the bloc, and 42.43% in France. 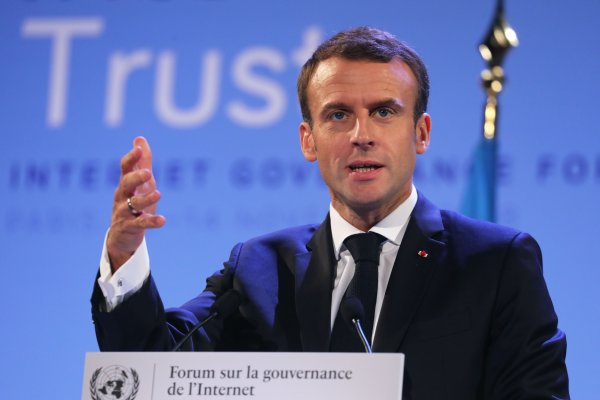 France to 'Embed' Regulators at Facebook to Combat Hate Speech
Next Up: Editor's Pick