Podcast Reveals Mr. Big Was Supposed To Die in Sex and the City 3

Grab a cosmo and brace yourselves for this, Sex and the City fans: Mr. Big was supposed to die.

A new show from podcast network Cadence13 is diving into the behind-the-scenes drama of the HBO series and its spin off movies and they just revealed part of the plot of the never-made third Sex and the City movie and it doesn’t end well for Chris Noth’s character, Mr. Big. On Origins, host James Andrew Miller reveals that in Mr. Big, who had heart problems during the show’s run on HBO, was supposed to die of a sudden heart attack in the shower. The franchise’s third movie was going to follow Carrie (Sarah Jessica Parker) as a new widow coping with grief with the help of her friends Charlotte (Kristin Davis), Miranda (Cynthia Nixon), and Samantha (Kim Cattrall).

For the podcast, Miller spoke to most of the cast including Parker, Nixon, Noth, and Davis, (sadly, not Cattrall) as well as producer Michael Patrick King and creator Darren Star and got all the dirt on Sex and the City, movie and series. Fans didn’t get to see Carrie wearing all black and crying at brunch (or however she copes), because the film was never made, which the podcast says is because Cattrall wasn’t particularly interested in reviving her iconic Samantha Jones character simply to play supportive friend to a grieving widow. While Cattrall was the only member of the fabulous foursome who didn’t share her side of the story for the podcast, Miller reportedly got the inside scoop from some of her friends. “People close to Kim believe she never wanted to do the third movie. Period,” said Miller, explaining that there were a few reasons for this belief: First, “the script for the movie didn’t have a lot to offer the character of Samantha,” Miller said in the show, since the plot mostly involved watching “how Carrie recovers from Big’s death [more] than about the relationship between the four women.”

While Cattrall would not comment to the podcast (and a representative for Cattrall did not immediately return a request for comment), she did discuss her decision to stay away from the movie to Piers Morgan in October of 2017. “Me playing [Samantha], that I can assure you will never happen,” she said. “This isn’t about more money, this is not about more scenes, it’s not about any of those things. This is about a clear decision, an empowered decision in my life to end one chapter and start another. I’m 61. It’s now.”

According to Miller, Cattrall already wanted to move away from the Sex and the City world and there was a sense the show’s profits were being divided up unfairly on the back end all of which made Cattrall feel even less inclined to be involved.

“We negotiated in good faith,” Parker told Miller in the show about negotiating with Cattrall. “I emailed her, I tried to reach out to her and say like, ‘We want you part of this. You’re an integral part, of course you are. I hope when you read this script you’ll see the beauty, the joy, the heartbreak in it that I see, that we have seen.’” Since Cattrall and the studio could not make a deal, Parker, who swears she is “not in a catfight with anybody”, now seems resigned about the end of the road for the Sex and the City franchise. “So then it’s over,” Parker said, “but that’s not a character assassination, that’s just the way business works.” At least fans don’t have to watch Mr. Big die in a shower! 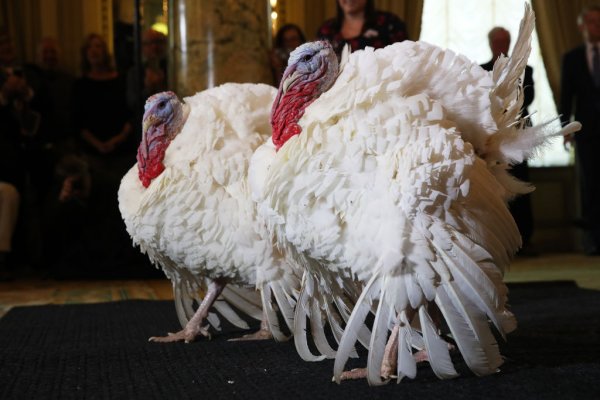 Trump Saved 'Peas' and 'Carrots' at the Presidential Turkey Pardon
Next Up: Editor's Pick