Here's What We Know So Far About the Downtown Denver Shooting

By Eli Meixler and Gina Martinez

Police have arrested two suspects following Monday’s shooting in downtown Denver that left one person dead and four others injured – including one of the alleged shooters.

On Tuesday, Denver Police Chief Paul Pazen confirmed the arrest of 24-year-old Josh Hayward and 24-year old Deshay Armstrong in connection to the deadly shootings in a news conference.

Pazen said investigators cannot confirm the motive, but believe it was a targeted shooting.

One victim was pronounced dead at the scene, according to Denver police, while four others were transported to area hospitals with injuries, including one of the alleged gunmen.

Denver Police Spokesperson Doug Schepman initially reported the victims were in critical condition, but later said the injuries are “believed to be non-life threatening.”

Pazen confirmed there was an exchange of gunfire between two men. Pazen said one of the suspects, 24-year-old Josh Hayword, fled the scene in a vehicle. Police were able to track him down and arrest him early Tuesday morning. He is being held for first-degree murder.

Pazen said the second suspect arrested was one of the men taken to the hospital with a gunshot wound. Police said Armstrong is facing federal weapons charges.

Witness Hisam Derani told the Denver Post, one shooter fired a handgun about a half dozen times at a group of homeless people before getting into a car and leaving the area. A bystander returned fire at the car as the shooter sped away, Derani said.

There was another homicide on Sunday a few blocks away from the scene of Monday’s shooting, but police said there was no reason to believe the incidents were related.
https://www.pscp.tv/w/1vAxRyPQZlyJl?t=4s

The incident in Denver Monday was the 315th mass shooting event so far this year, according to the Gun Violence Archive (GVA), a nonpartisan research group. Another shooting in Philadelphia on Monday, which killed four people, brings the organization’s tally to 316 total mass shootings so far in 2018. Those incidents resulted in 352 deaths and 1,257 injuries.

The GVA’s records put 2018’s toll of violence about on pace with last year’s: the group recorded 325 mass shootings over the same period in 2017.

The Denver shooting was Colorado’s seventh so far this year, according to the archive. Six of those shootings occurred in Denver, while the seventh was in Colorado Springs, where a sheriff’s deputy was killed and three other offices wounded in an incident in February.

Slightly different figures were listed by the Mass Shooting Tracker, which defines a mass shooting as one in which four or more people are shot. The tracker has recorded 391 shootings so far in 2018. 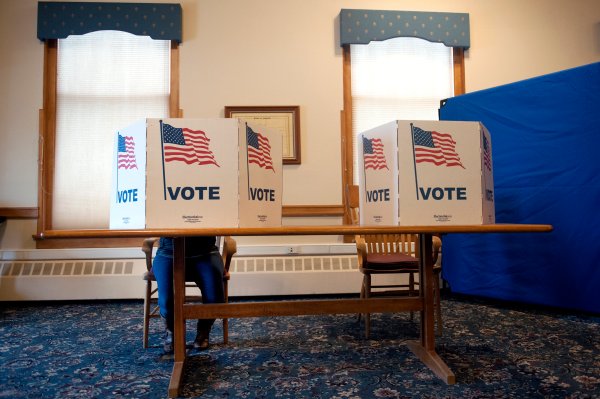 Colorado Votes to Fully Abolish Slavery
Next Up: Editor's Pick