16 Democrats Sign Letter Against Nancy Pelosi as Speaker. But the Effort Could be Losing Momentum

A letter signed by 16 Democrats opposing Nancy Pelosi’s bid to become Speaker again appears to suggest that she may not be in as much trouble as previously thought.

The widely anticipated letter released Monday was signed by 11 current lawmakers, four incoming ones and one whose race hasn’t been called yet. Notably, it does not include the signatures of a handful of Democrats who had previously said they would vote against her on the floor.

Ultimately, all the letter did was show that, while the math is still a problem for Pelosi, she has still has quite a plausible path to gaining a majority of the caucus.

“If your strategy relies upon Nancy Pelosi giving up, you will lose every single time,” said one senior Democratic aide. “Ninety-four percent of the Caucus didn’t sign this letter.”

Circulated by Rep. Kathleen Rice of New York, the letter praises Pelosi for her leadership, calling her a “historic figure whose leadership has been instrumental to some of our party’s most important legislative achievements.”

But it goes on to argue that voters showed they want change in the last election and that should include new Democratic leaders. It only explicitly references Pelosi and makes no mention of her top deputies, Reps. Steny Hoyer and James Clyburn.

To be sure, these signatures pose a problem for Pelosi. In order to become speaker, she must receive 218 votes on the House floor on Jan. 3. Democrats are currently projected to hold 232 seats, according to CNN, with three races still outstanding. If Democrats stay at 232 seats, she can only afford to lose 14 votes. But that ultimate number is dependent on the ultimate size of the majority; if it increases to 233, she can lose 15 votes.

While the letter technically means she doesn’t have the votes at the moment, there are legislative mechanisms to lower the actual threshold of votes she would need, like members voting “present.”

The letter does not include the signatures of Democrats who have said they would vote against Pelosi on the floor, including Jason Crow, Abigail Spanberger, Elissa Slotkin, Mikie Sherrill and Conor Lamb. Pelosi spent Friday meeting with some of these incoming freshmen, a continuation of outreach she has been conducting since House Democrats prevailed in the midterm elections.

She also has an army of support backing her candidacy. The majority of likely committee heads, including the ones that would wield the most power in the new Democratic congress, like Rep. Jerrold Nadler on Judiciary, Rep. Cummings on Oversight and Government Reform, and Rep. Adam Schiff on Intelligence, are squarely supporting Pelosi. Outside groups spanning the spectrum of liberal advocacy, from female empowerment groups like Emily’s List to progressive organizations like MoveOn.org and more than a dozen labor unions, are also advocating for Pelosi. And of course, Pelosi herself has the power, should she reclaim the gavel, to use committee assignments and fundraisers to reward backers – and withhold those benefits for detractors.

But those opposing Pelosi’s candidacy say that this type of whip operation is exactly why they need new leadership, arguing that the new members who campaigned against her are now finding themselves pressured to cast a vote that could ultimately cost them reelection.

“When we finally get into the majority I think we have to do all we can to keep these new members here, to support them in whatever campaign promise that they made,” Rice told reporters last week. “It would be nice if there were arguments being made to [new members] that were substantive as opposed to getting outside money people or advocacy groups … to threaten that you’re gonna lose support if you don’t support Nancy Pelosi.”

Whip operation aside however, there’s another glaring challenge for Pelosi’s detractors: she doesn’t yet face a definitive challenger. None of the signatories have an interest in challenging her themselves, although some have floated the idea of Rep. Marcia Fudge. Fudge had signed onto the letter last week, but withdrew after publicly announcing she was mulling a bid, according to one Democratic aide, which is what Tim Ryan did when he challenged Pelosi in 2016. Fudge and Pelsoi met on Friday, a meeting that was orchestrated by Cummings. Fudge’s office did not immediately respond to a request for comment. 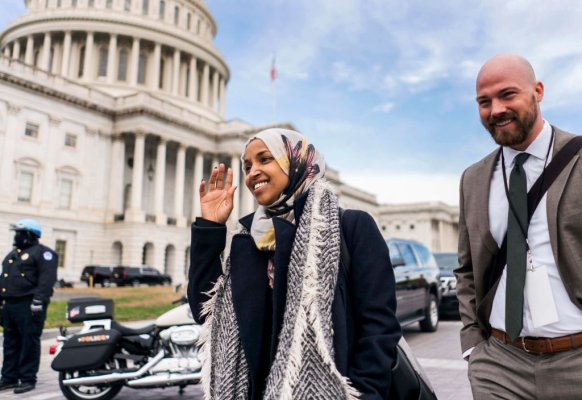 Democrats Aim to Change a House Rule to Allow Religious Headwear
Next Up: Editor's Pick