The Best New and Returning TV Shows to Watch in 2019

A number of popular shows like Game of Thrones, The Big Bang Theory, Homeland, Orange Is the New Black and Jane the Virgin are coming to an end in 2019. Hopefully these shows will answer lingering questions and offer satisfying conclusions to fans. Some of the series will even get spinoffs.

But don’t despair: there are plenty of shows to fill the void. Apple and Disney are each launching streaming services with a morning show drama starring Jennifer Aniston and Reese Witherspoon and a Star Wars epic, respectively. Popular series like True Detective and Big Little Lies are getting new seasons. Fans will even be treated to a new version of Les Misérables—this time, without the music. And major stars continue to flock to the medium with the likes of Cate Blanchett, Daniel Radcliffe and Zendaya starring in their own series in 2019.

Here are all the new shows and shows entering their final seasons to look forward to in 2019.

The three-part documentary will feature 50 interviews with survivors and experts who allege R. Kelly has a long history of sexual violence.

You're the Worst.
Byron Cohen—FX

The show began when two horrible people hooked up. Now, the worst couple in history plans to tie the knot in the final season of the insightful comedy.

Rachel Bloom’s musical dramedy about a woman struggling with mental health issues embarks on the second half of its final season.

The British comedy centers on a socially awkward high schooler with a sex therapist for a mother (Gillian Anderson). He and a friend open up a clinic to deal with their classmates’ sexual problems.

Love it or hate it, True Detective is back. This time Oscar-winner Mahershala Ali and Steven Dorff star as Arkansas detectives investigating the disappearance of two children. Like the first season, this iteration will span decades.

A Discovery of Witches

Matthew Goode and Teresa Palmer play a vampire and a witch, who of course are also star-crossed lovers. The series is based on Deborah Harkness’ bestselling All Souls trilogy.

Jane the Virgin’s Gina Rodriguez lends her voice to the reboot of the educational cartoon. The new show promises to dive into how Carmen Sandiego became an international thief.

Don Cheadle, Regina Hall and Andrew Rannells star in a Wolf of Wall Street-esque take on the years leading up to the 1987 stock market crash. Seth Rogen and frequent collaborator Evan Goldberg serve as executive producers.

The irreverent comedy starring duo Abbi Jacobson and Ilana Glazer comes to a close after five seasons. But don’t despair: both women have signed contracts to develop several other shows for Comedy Central.

Former Saturday Night Live head co-writers Chris Kelly and Sarah Schneider wrote and produced this new series about two struggling siblings who cling to the coattails of their younger brother when he suddenly becomes uber-famous.

The last season of Tina Fey and Robert Carlock’s comedy was split into two halves, with the first part airing in 2018. The final episodes drop on Netflix in January—though Fey and Carlock have hinted at a possible movie.

I Am the Night

Wonder Woman director Patty Jenkins reunites with Chris Pine for a miniseries based on a true story. Pine plays a journalist investigating a gynecologist accused of killing the Black Dahlia. He locates a girl, given away at birth and searching for her identity, who may help him crack the story.

Orange Is the New Black star Natasha Lyonne appears as a woman who can’t escape her own birthday party in a comedy co-created by Amy Poehler.

Miracle Workers joins a handful of other celestial television comedies (The Good Place, God Friended Me). Steve Buscemi plays God and Daniel Radcliffe one of his angels.

Desus Nice and The Kid Mero participate in a q&a at the FYC Event for VICELAND's DESUS & MERO at Saban Media Center on April 20, 2018 in North Hollywood, California.
Charley Gallay—Getty Images for VICELAND

After ending their Viceland series, popular podcast hosts snag a new late night slot. The duo will riff about sports, pop culture and politics in front of a studio audience every Thursday night.

Netflix brings the popular and strange comic book series to television. Ellen Page plays one of a group of children who were born under mysterious circumstances and raised by an eccentric millionaire to be superheroes.

Saturday Night Live star Aidy Bryant finally gets her own show. She stars in an adaptation of Lindy West’s bestselling memoir about becoming a writer in Seattle.

Many people think of Les Mis as a musical—whether they saw it on stage or screen. But Masterpiece Theater’s upcoming adaptation of Victor Hugo’s famed novel will be a drama without song. The six-part show boasts an impressive cast, including David Oyelowo, Olivia Colman and Dominic West.

The final season of Game of Thrones might be the most anticipated finale in the history of television. Not even book readers know how the story will end.

Chuck Lorre’s uber-popular sitcom comes to a close this spring, capturing the title of longest-running multi-camera series in television history with 12 seasons and 279 episodes.

Julia Louis-Dreyfus returns for the final season of Veep, a political comedy that hits ever closer to home.

Brilliant CIA agent Carrie Mathison’s adventures—and many ethically dubious decisions—draw to a close. Homeland will debut its eighth and final season this summer.

Ava DuVernay will serve as both writer and director for the miniseries about the five black and Latino boys who were accused of attacking and raping a jogger in Central Park in 1989. The boys were eventually exonerated, but not before they were vilified by the media—and none other than Donald Trump.

The long-gestating film follow-up to the beloved Western series is finally happening. Creator David Milch has said that the movie is set 12 years after the series’ end.

Director Damien Chazelle during a photocall for the film "First Man" on August 29, 2018 prior to its premiere in competition at the 75th Venice Film Festival at Venice Lido.
Filippo Monteforte—AFP/Getty Images

The Eddy is another musical from La La Land director Damien Chazelle, this time about a jazz club in Paris.

Zendaya stars in an American adaptation of an Israeli TV series about a group of high schoolers navigating sex, drugs and social media. The music ought to be good: Drake is producing.

Four Weddings and a Funeral

Consummate rom-com fan Mindy Kaling is turning the classic Richard Curtis film into a television series. Game of Thrones’ Nathalie Emmanuel is set to star—hopefully the weddings in this show turn out better than those in Thrones.

Julian Fellowes speaks during the In Conversation With at the Sands Expo and Convention Centre on June 20, 2017 in Singapore.
Suhaimi Abdullah—Getty Images

Fans will get a chance to go back to Downton Abbey when movie version of the beloved series hits the big screen in September. But Abbey creator Julian Fellows is keeping busy. His long-awaited costume drama about millionaire titans of New York City in the 1880s is headed to NBC.

Neil Gaiman and Terry Pratchett’s novel gets an adaptation with an all-star cast. David Tennant plays a demon and Michael Sheen an angel who team up to try to stop the apocalypse so they can mess with humans a little longer. Jon Hamm, Nick Offerman and Frances McDormand round out the cast.

TBA on The CW

The fifth and final season of the Peabody-winning show will reckon with that big twist at the end of season 4 and set the stage for a planned spin-off.

Apple elbows its way into the streaming service wars with two of America’s sweethearts. They star alongside Steve Carell as morning show hosts and producers in a cutthroat battle for ratings dominance.

It’s been nine years since Idris Elba last played the fan-favorite detective Luther on television. The long-awaited fifth season of the show will premiere on Jan. 1 in England before eventually making its way to America.

Disney is launching its own streaming service in 2019, and hopes that a Star Wars TV show helmed by Iron Man director Jon Favreau and starring Pedro Pascal (Game of Thrones) will pull in subscribers. Pascal plays a lone gunman operating on the outer edges of the galaxy after the fall of the Empire.

The conspiracy-laden drama that launched the career of Bohemian Rhapsody star Rami Malek will come to a close with its fourth season, according to creator Sam Esmail.

Cate Blanchett stars as Phyllis Schlafly, a self-described housewife activist who led the opposition to the Equal Rights Amendment, the pro-choice movement and second-wave feminism in the 1970s.

The horror novel with a sinister twist on Christmas gets an onscreen adaptation. Zachary Quinto is set to star.

Orange Is the New Black

After seven seasons, Netflix will wrap up one of its first critical hits, Orange Is the New Black. The show will diverge from previous seasons by spending more time following certain characters’ lives after they are released from Litchfield.

Ava DuVernay serves as an executive producer on this drama about a black doctor who is shot by a white policeman. The story spins out from there, examining the ensuing drama from various perspectives.

A scene from "Undone."
Amazon

After three seasons and a movie, everyone’s favorite teen detective is all grown up and back for another eight episodes.

Damon Lindelof (Lost, The Leftovers) brings the iconic comic book series about morally compromised superheroes to television. He promises his version will respond to Trump in the same way the original story was specific to the Reagan era.

What We Do in the Shadows

Most know director Taika Waititi from his triumphant take on Thor in Ragnarok. But before that, Waititi and his creative partner Jermaine Clement earned cult status with their mockumentary What We Do in the Shadows about 300-year-old vampires trying to navigate modern life. Now that movie is being fleshed out into a television show.

Henry Cavill is trading in Superman’s cape for Gerhalt’s grey wig in The Witcher. The adaptation of the popular Polish fantasy saga—and blockbuster video game—aims to capture the attention of Game of Thrones fans. 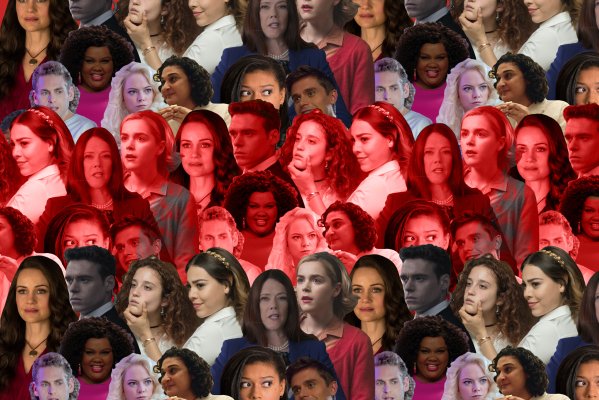 There's Officially Too Much Netflix. What Happens Next?
Next Up: Editor's Pick