People Say It's Boring to Talk About a Dream You Had. Here's Why You Should Do It Anyway

Getty Images
Ideas
By Alice Robb
Robb is a science journalist and the author of the forthcoming book “Why We Dream.”

When Shane McCorristine, a scholar of modern British history, went trawling through police reports from 19th-century England, he was struck by the number that contained descriptions of dreams: witnesses and victims seemed to make a point of telling police and coroners if they had anticipated a crime or a death in their dreams. Telling dreams, he said, was a way to create “a social bond between a vulnerable person and the authorities.” But he noticed that dream reports started dropping out of inquests and news stories in the 1920s, and he pinned the blame on Freud. “Freudian theories were spreading, and they were recalibrating people’s relationship with the dream world,” he said. “There’s increasing embarrassment around dreams.” Suddenly, they might be interpreted as signs of some latent neurosis or sexual deviance.

A century later, conventional wisdom dictates that dreams are not a subject for polite conversation. Writing for the New Yorker’s website in 2018, Dan Piepenbring began a review of Insomniac Dreams — a book about Nabokov’s relationship with his dreams — by apologizing for the topic: “Dreams are boring. On the list of tedious conversation topics, they fall somewhere between the five-day forecast and golf.” A few years earlier, radio producer Sarah Koenig devoted an episode of This American Life to laying out the seven topics that interesting people should never talk about. Dreams came in at number four, right behind menstruation. In the Guardian, British writer Charlie Brooker claimed that listening to other people’s dreams made him dream “of a future in which the anecdote has finished and their face has stopped talking and their body’s gone away.” Novelist Michael Chabon wrote in the New York Review of Books that discussion of dreams is all but banned from his breakfast table, railing against them as poor conversational fodder: They drag on and on. They get twisted in the telling. Most unforgivable, they are bad stories. When I explain the topic of my book, people frequently offer their sympathies: “People must want to tell you their dreams,” they say with an I-feel-your-pain nod. “Those are the most boring conversations.”

“Tellers of dreams have some basic obstacles to overcome,” literary scholar James Phelan said when I asked him whether there was anything about dreams that rendered them tedious narratives. “What makes stories of non-dream experiences interesting is that they are ‘tellable’ in some sense: the story implicitly claims that there’s some- thing about the experiences that raise them above the level of ordinary, unremarkable happenings.” The protagonist might confront some danger, learn a lesson, or encounter something beautiful. But in dreams, “just about any event can occur, which means that the ordinary/extraordinary distinction relevant to stories of non-dream experiences no longer applies, which makes tellability more murky.”

Another problem is that dreams don’t follow the type of logic we expect of a good yarn, Phelan said. “Often tellers will try to recount faithfully the sequence of the dream events. But such faithfulness typically means no cause-and-effect logic, and that absence typically means no coherence to the story, and no coherence means a bad story. If the story of my day is boring because it is awash in details of no significance, the faithful recounting of a dream is boring because it is awash in randomness.”

And it’s hard to feel invested in another person’s dream. You don’t have any stake in it — you know from the outset that the story ends with the dreamer waking up in bed, unscathed. “The teller of the dream has a listener who inherently doesn’t really care, because it’s the teller’s dream, and the listener is hearing something kind of egotistical and likely to be embarrassing,” said Alison Booth, an English professor at the University of Virginia who specializes in narrative theory. “How are we to imagine we are the dreamer, when we hear about it? Whereas in fiction, rule number one is you are the reader and you have every right to be at the center of the story/imagine yourself as protagonist.”

But maybe Westerners are just out of practice; maybe they don’t know how to communicate their dreams. The reluctance to talk about dreaming is a culturally specific — and recent — phenomenon. There may even be an evolutionary reason why we feel so compelled to share our dreams. If the brain is trying to identify weak associations that may be valuable, then “it’s got to be very lenient,” said Robert Stickgold, director of Harvard’s Center for Sleep and Cognition. “Maybe part of this process of biasing the brain’s association-strengthening mechanism — to say, ‘Pay attention to this association I found’ — carries over into waking, and now you want everyone else to pay attention to it.”

As our ancestors intuited, talking about dreams — whether casually recounting them to friends, analyzing them in structured groups, or even sharing them with strangers on the internet — can amplify their benefits. The more we integrate our dreams into our days, the more easily we remember them. And the act of discussing dreams can bring people together; just as dreams open up conversations on sensitive or embarrassing issues in a therapeutic setting, they can also facilitate intimate conversations among friends.

From the 1970s onward, psychiatrist and psychoanalyst Montague Ullman led the movement to develop dream-sharing groups. He wanted to democratize dream analysis — to find a way for people without special qualifications or access to psychiatric care to gain insight and social connection from their dreams. “Trust, communion, and a sense of solidarity develop rapidly in a dream-sharing group,” he wrote. “There is an interweaving of lives at so profound a level that the feeling of interconnectedness becomes a palpable reality.”

New research confirms what Ullman suspected: participating in a dream group can yield a host of social and psychological benefits. In one study, college students’ levels of personal insight were measured after they shared either a dream or a significant real-life experience with the researchers. The students met in groups until everyone had spent a full forty-five-minute session parsing both a dream and an emotional daytime event. Sharing a dream proved to be more helpful; scores on scales of exploration insight (“I learned more from the session about how past events influence my present behavior”; “I learned more about issues in my waking life from working with the dream/event”; “I learned things that I would not have thought of on my own”) and personal insight (“I got ideas during the session for how to change some aspect(s) of myself or my life”; “I learned a new way of thinking about myself and my problems”) were significantly higher if the students had worked with a dream.

Clara Hill, a psychologist at the University of Maryland, has studied how dream groups can help people improve a relationship or cope with a breakup. In one experiment, she and a coauthor recruited 34 women going through a divorce and invited 22 of them to a weekly dream group. Many of their dreams revolved around painful themes like failing or being thwarted or mocked. One woman dreamed of going home to reconcile with her husband and finding him in bed with two beautiful women in an apartment full of dead fish. Another woman dreamed of climbing a rope up a muddy hill, only to keep sliding back down. The 12-person control group, meanwhile, spent the two-month period of the study on a waitlist before finally sharing their dreams in a single workshop. By the end of the experiment, the women who had participated in the ongoing dream group not only had gained insight into their dreams but also ranked higher on measures of overall self-esteem. The catharsis of sharing their secrets and the pleasure of belonging to a community translated into a confidence that stretched beyond the limits of the weekly dream group.

Studies like these are useful in proving that psychologists should take dream groups seriously — but people don’t need to consult the latest research to know that dream groups can be a source of insight and a balm for boredom and loneliness. Less formalized dream groups have cropped up as an organic bonding ritual in desperate situations. “Every morning we would start the day by sharing and interpreting the dreams we had during the night,” one Auschwitz survivor wrote years after liberation. Dreams were a source of distraction in an environment sorely lacking in it; the dreaming mind was a self-reliant fount of entertainment. And the act of sharing dreams became an exercise in community-building. The Nazis replaced inmates’ names with numbers and subjected them to barbaric conditions, but in sharing a dream or offering an interpretation, a prisoner could reassert his humanity.

“The interpersonal dimension of interpreting dreams in Auschwitz was connected with the inmates’ need for capturing others’ attention,” Owczarski wrote. “When a prisoner shared an interesting dream, he or she became, at least for a while, important for his or her interlocutor . . . The meaning of a dream was not as important as the sheer fact of talking about it. Sharing dreams was therefore a kind of mutual help, aimed at increasing the inmates’ self-esteem.”

In a vacuum of outside news, prisoners looked to dreams for clues to life-or-death questions like whether their relatives were still alive and whether the war would ever end. And because dreams were thought to contain prophecies pertinent not only to the dreamer but to other prisoners and the community at large, dissecting them was a legitimate group activity. Throughout the day, people could look for signs that an omen from another inmate’s dream had been fulfilled. “When the dream did not come true for the dreamer, it came true for his friend,” one prisoner said. “Dreams became common property: see, your friend dreamt about it.” They made up their own dream dictionary that reflected the precariousness of their lives and their preoccupation with the future. Smoking a cigarette prophesied the dreamer’s release from prison. Cooking meat meant that he would be beaten during interrogation.

After liberation, many of the inmates were embarrassed to remember their one-time faith in dreams; the extreme stress of camp life had allowed them to suspend their disbelief. “It is hard to tell why we were all so naïve,” one survivor wrote. “Nowadays, we see them [the dream interpretations] as immature or even silly, but back then they were simply necessary,” said another.

Adapted from Why We Dream: The Transformative Power of Our Nightly Journey by Alice Robb, on sale Nov. 20. Copyright © 2018 by Alice Robb. Published and reprinted by permission of Houghton Mifflin Harcourt. All rights reserved. 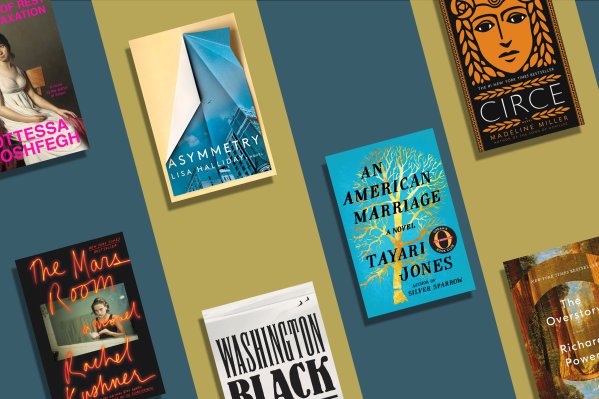