Jimmy Kimmel had a question for his late night audience on Thursday: “You remember Mrs. Obama? From when we had a United States?” Turns out the audience picked a great night to come to Jimmy Kimmel Live! as the show was hosting a very special guest. “Our former First Lady is here to share stories from her new autobiography, Becoming,” Kimmel said, before joking, “As in, ‘What the hell is this country Becoming?’”

When Michelle Obama joined him on stage, Kimmel noted that during her time in the White House, the former First Lady had to be careful about what she said. Since she is no longer there, though, she can now basically say whatever she wants. To help her enjoy the newfound freedom, Kimmel presented her with a few note cards with things that Kimmel was pretty sure she wanted to say as the First Lady, but couldn’t while her husband was the president. Thanks to Kimmel’s insightful suggestions, Obama was able to admit, “The whole eight years we were in the White House we used Laura Bush’s Netflix password” and that despite her healthy eating campaign, she has “never eaten a vegetable.” She also read a card that said, “I’m not sure which one is Sasha and which one is Malia.” While Kimmel wrote it, Obama couldn’t help but laugh, “You know? They agree!” 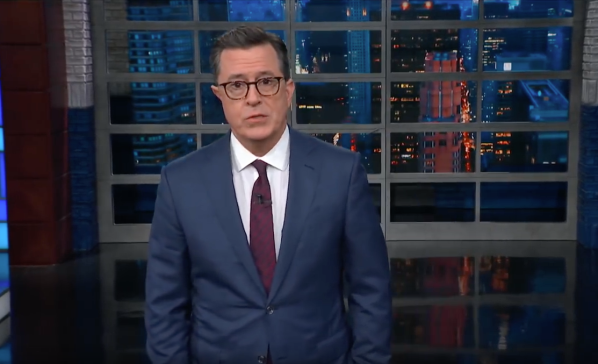 Stephen Colbert Says Being President Has Really Worn Trump Down
Next Up: Editor's Pick