It has become so commonplace to talk about women as “fierce” that the adjective barely has meaning; ditto “bad-ass” and “kick-ass,” comic-strip words that aren’t deep enough to hold any emotional complexity. Yet women often use these words to refer to themselves even as they work to be taken seriously, underplaying the value of fortitude, logic and sophisticated, adult glamour. In our rush to vocalize, about anything and everything, we’ve forgotten some of our finest secret weapons, like discreet silence coupled with a less-discreet side-eye. There are times when saying nothing, with conviction, speaks volumes.

Widows, directed by Steve McQueen and starring Viola Davis as the ringleader of an all-woman band of thieves, is a thriller for modern women who identify more with the messiness of human lives than with flattened slogans about how great women, as a monolithic group, are. McQueen co-wrote the script with Gillian Flynn (of Gone Girl and Sharp Objects fame), drawing from a British mini-series of the 1980s developed and written by Lynda La Plante (and adapted from her novel). In this new incarnation of Widows, Davis plays Veronica Rawlings, a woman whose husband, Harry (Liam Neeson), is clearly in a shady line of work. Veronica doesn’t ask questions, and she obviously enjoys the lifestyle her husband provides for her—their apartment is one of those snowy-white modern luxury setups, perched high in the Chicago sky, and she has a fluffy white designer dog to match.

But early in the movie—in a sequence that shifts artfully between the noise and destruction of a crime in progress and the everyday, radical tenderness of a couple kissing in bed—Harry’s latest job goes kablooey. The getaway van he’s driving—along with the guys and the stolen money inside it—goes up in flames. The money belonged to crooked political hopeful Jamal Manning (Brian Tyree Henry), and even as Veronica mourns, Jamal shows up to threaten her. (His brother and henchman, played with believable viciousness by Daniel Kaluuya, will end up doing most of the dirty work.) Veronica’s got to come up with a heap of money, fast. Luckily, Harry has left her a notebook detailing his next criminal exploit. So she gathers the widows of all the men who’d partnered with her husband in that last, failed job—they’ve never met, let alone socialized with one another—and enlists their help in pulling off an elaborate heist. It will work, she assures them, because “no one thinks we have the balls to pull this off.”

That’s the “what” of in Widows. But the “how” and the “who” make all the difference. The plot becomes perhaps a little too tangled, involving, in addition to Manning and his thugs, a father-son duo (Robert Duvall and Colin Farrell) jockeying for power in the world of city politics. The complicated plot mechanics are necessary, in a way, but they still distract a little too much from Davis—who, as always, is superb—and the cast of women around her. And face it—that’s what we came for.

Michelle Rodriguez is the beleaguered mom, Linda, who realizes just how useless her husband is only after his death: His gambling debts cost her the clothing shop she runs. Elizabeth Debicki—so tall and soulful she sometimes seems like a regal giraffe, surveying her kingdom from a place where even the air is lonely—is Alice, whose late boyfriend used to buy everything she needed. He also used to knock her around. That was all wrong, and deep down she knew it, but now that he’s gone, she needs to find another man to lean on. (On that issue, her mother, who appears to have sprung from the womb of a Bedazzler—she’s played by a platinum-blond-coifed Jacki Weaver—gives her some decidedly un-momlike advice.) A fourth woman, Belle (Cynthia Erivo, who seems to sprint through every scene she appears in, fast and sharp and funny), joins the group as a getaway driver: She’s already a hairdresser who moonlights as a babysitter, even as she raises a daughter of her own; why not add one more hat?

There’s some nasty violence in Widows, some clever scheming and, among the women, lots of initial mistrust. All three of these women relied on men to take care of them—that was their first mistake. At the core of Widows is a truth that might sound cynical: No matter how happily you think you’re married or partnered off, it’s a good idea to have some getaway money, and an Epi-Pen loaded with self-esteem, stashed under the bed for emergencies. But McQueen and Flynn present it as part of the eternal truth of womankind, and a reminder that self-preservation can bring its own kind of joy and gratification. In one of the movie’s most glorious scenes, Vanessa sends Alice to buy some firearms, even though she doesn’t know the first thing about them. Lost at a gun show, she crafts a sob story—using a phony Russian accent—to persuade a woman gun expert to help her. Striding back to the widows’ HQ with her pile of newly acquired weapons, she looks as pleased with herself as if she’d just hit the jackpot at a Manolo Blahnik sale.

The women of Widows get things done not because they buy “You can do anything!” bathroom-mirror bromides, but because they don’t. They have to sell the idea of self-confidence to themselves, because that’s mostly how self-confidence works; it’s a self-renewing resource, not a fountain with an autopump. (That’s true not just for women, though it often seems that men have an easier time latching onto the idea.)

And in Widows, the most self-assured member of the group, the woman who has to get the whole thing rolling and see it through to the end, has to learn the hardest lesson of all about self-worth. None of the other widows like Veronica when they first meet her. They still don’t like her—mostly—by the end. But they owe their lives to her. And in some ways she’s both lost and gained more than they have.

In the movie’s early moments, where we see Veronica and Harry in bed, the tender erotic charge between them is so evident it’s practically a third party. (Let’s forget for a moment that we’re seeing, in a movie, a white man and a woman of color kissing, with fervid devotion, in bed. McQueen presents it like it’s an everyday thing, because in real life, it is—but in the movies, we’re quick to take note of a “mixed” couple, so rarely do we see it.) After his death, we see reruns of those moments as Veronica plays them in her memory. Her grief hangs in the air like a geometric shape; Davis, her eyes revealing all by trying to hide everything, makes us see its contours and shadows, and feel its coldness. As McQueen has shown them to us, a classical marble sculpture of lovers come to life against white sheets, Harry and Veronica represent perfect marital happiness. What Veronica learns about herself after Harry is gone, the truth she’s left with, is really just a heat-forged, battle-scarred version of what she started with. She may be the modern-day definition of fierce in her elegant white pantsuits, but she’s also glamorous and grown-up, an over-50 woman who had to push past all the doubts she’s not supposed to have. Certainty is only for the young. 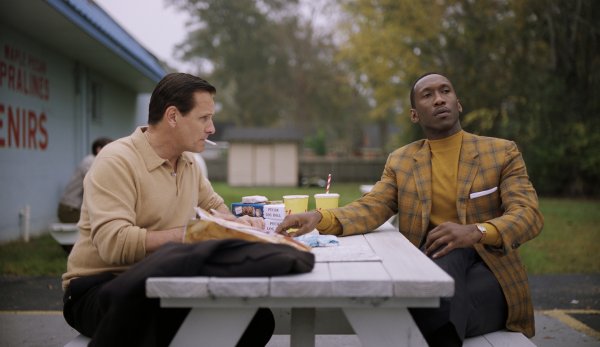 How Green Book's Screenwriter Was Inspired to Write the Movie
Next Up: Editor's Pick