NBA Analyst Doris Burke Is Blazing a Trail in Sportscasting

The Indiana Pacers are Hosting the Philadelphia 76ers on an early November evening at Bankers Life Fieldhouse. About a half hour before tip-off, a couple of fans jostle for position courtside, trying to steal a moment with a star attraction. These men aren’t seeking an autograph from Pacers guard Victor Oladipo, an emerging NBA talent. Nor do they clamor for attention from Philadelphia’s Joel Embiid, the 7-footer who can do it all on the court. No, they want to mingle with the woman wearing a headset at the broadcast table, buried in pregame preparation. “I can’t believe,” says a starstruck Jack Hahn, a 44-year-old auto-parts salesman, “that’s Doris Burke.”

An ESPN basketball announcer for more than 25 years, Burke, 53, is one of the most popular sportscasters in America. When she was named a full-time NBA color commentator before the start of last season, she became the first woman ever to take on such a regular national NBA game-analyst role. This main-stage appointment came after years of a grueling schedule broadcasting a mix of women’s and men’s college basketball, the WNBA and the NBA. Burke is the rare broadcaster who’s earned respect and admiration from players, coaches and fans alike. She stands out for dropping insightful factoids and sharing her passion sans shtick. After Embiid dribbled around a defender for a slam, Burke translated his message: “You can have no part of this. I am too good for you!”

Her style has earned Burke a cult following. A colleague, former NBA coach Jeff Van Gundy, once called her the “LeBron James of sportscasters,” and Kevin Durant called her “the greatest.” In 2016, the rapper Drake donned a T-shirt with her likeness while sitting courtside at a Toronto Raptors game. Woman Crush Everyday, read the words–a play on the popular Instagram trend Woman Crush Wednesday.

But Burke needs no celebrity endorsements for validation. In September she became the first female broadcaster to receive the hoops Hall of Fame’s Curt Gowdy Media Award, given annually to media members who’ve made “outstanding contributions to basketball.” “My imagination could not have dreamed this up,” she told TIME over crab cakes, brussels sprouts and red wine at an Indianapolis hotel the night before the Pacers-Sixers game. “Not in a million years.”

When she first started analyzing men’s college games in the 1990s–and later NBA contests–she heard objections from critics who thought a woman shouldn’t call men’s sports. One viewer even mailed a misogynistic screed to her home, including a disturbing statement she can’t seem to forget: “When a woman says ‘no,’ she means ‘yes.'” Scared, Burke called ESPN security.

Over the years, such ugliness has largely faded. A prominent college basketball reporter once called her aside before a game to let her know that after listening to her, he was totally wrong for objecting to her presence on the air. She’s heard similar mea culpas from others. “I understood when I started that people would question that–‘Why is she there?'” says Burke. “Gender dynamics are in play. Sports is nothing more than a reflection of society, so women have always occupied certain positions, have been viewed in certain lights. It’s not until they venture into other spaces that things change.”

Burke’s seat in the booth is set. She signed a five-year contract extension with ESPN in June and is on board to break down the NBA’s most intriguing developments–the Golden State Warriors’ dynasty, LeBron James in L.A. She preps in an analog fashion, stuffing a few oversize manila envelopes, onto which she’s scratched detailed notes on the players, into a black Tumi backpack. After Philadelphia’s win, her papers are strewn out on a table. “Look at that carnage,” Burke says. “It’s a disaster.” A few more fans ask for selfies. Burke takes one with three young boys, one of whom compliments her work on the popular NBA 2K basketball video-game series, to which she lends her voice. Her play-by-play partner, Mark Jones, hangs back. He smiles, acknowledging his role as second fiddle. “I’m just part of the vapor,” he says.

The youngest of eight kids, Burke grew up playing hoops in Manasquan, a New Jersey shore town. After watching college games on NBC on weekends, she’d sometimes run out of her house with a ball and high-five the hedges, as if she were entering an arena for layup lines. Burke and a friend talked the boys’ high school coach into letting them play at a basketball camp, where they were the only girls. At one point, the coach called on the campers to split up into shirts and skins. “She and I just looked at each other,” says Burke, laughing at the memory. “What now?”

Burke earned a basketball scholarship to Providence College and went on to become an assistant coach there, a gig she loved. But after two seasons, she concluded that the long hours weren’t compatible with starting a family. Burke, however, jumped at the chance to announce Providence women’s basketball games on the radio. When a broadcaster failed to show up for a Providence men’s TV game, she subbed in on short notice and delivered. Burke kept getting assignments: she estimates she called 110 women’s and men’s games during one season in the early 2000s. Meanwhile, she tried to tune out the vitriol. “Your bosses will tell you how you’re doing,” says Burke. “All the other stuff is bullsh-t.”

Not long after Burke started calling NBA games on ESPN in 2007, San Antonio Spurs coach Gregg Popovich, who’s won five NBA championships and is notoriously grouchy with media, was explaining some strategy in a production meeting. “Doris, you’re a basketball person,” he told Burke. “You get this.” Such acknowledgment boosted her confidence. “My whole soul was smiling,” Burke says.

Still, she’s subjected to standards that men don’t face. About a decade ago, Burke felt ESPN wasn’t giving her the high-profile analyst assignments she deserved and voiced her frustration, leading to an honest conversation with a male producer. For years, she “wore out the school blazer,” she says, in order to project an air of seriousness like the guys. But the producer insisted that she let her hair down and dress with more style. TV, after all, is a visual medium. “I’m like, Yep, you’re right,” she says. “I’m a realist, you know?” Now she tries to have fun with her style choices. At a postgame nightcap with her ESPN colleagues, Burke delighted in sharing a text that her son Matthew, 24, sent her about that night’s black and white ensemble. “Doris Burke out here prepping for the 76ers game like,” he wrote, under a picture of two pilgrims.

Burke doesn’t envision calling games much beyond another five years. For one thing, she wants to be a full-time grandmother eventually. (Burke also has a daughter in her early 20s.) When she does step away, she’ll have left her mark. Burke was one of the first women to call men’s sports. Now Jessica Mendoza is one of ESPN’s lead baseball analysts. Candace Parker does color commentary for NBA TV games. Sarah Kustok’s the lead analyst for Brooklyn Nets broadcasts. “This next generation seems to me more confident, more enlightened, less accepting that things should just be,” says Burke. “And that just gives me joy.” 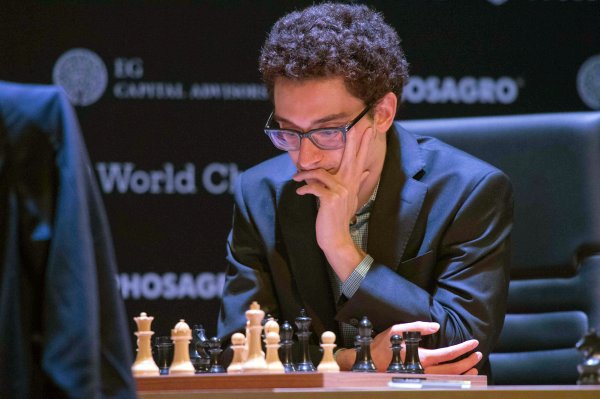 America Competing for Chess Title After 4 Decades
Next Up: Editor's Pick