Review: Apple's New iPad Pro Is An Incredible Tablet With One Major Shortcoming

Apple’s new iPad Pro won’t replace your computer. As the company’s latest take on its idea of “the future of computing,” it’s a fantastic understudy to your current laptop. As an iPad, it outshines the competition, and lets artists and creative professionals get work done without a mouse or keyboard. As a tool, it still benefits from amazing portability, and a strong ecosystem of apps. But conducting your activities the way you would on a computer will only lead you to frustration. Sorry, but Apple’s iPad Pro will not replace your computer, unless you’re willing to speak its esoteric language.

The latest version of the company’s professional-grade tablet pulls out all the stops when it comes to hardware. The laundry list of changes, enhancements, and upgrades is impressive, and builds on what was already a capable tablet with a pretty good stylus. The software, on the other hand, is in need of some serious improvement if it ever wants to compete with the versatility of the personal computer you know and tolerate today.

But first, the iPad Pro itself. The device’s tapered aluminum edges are gone, replaced with flat band of metal that wraps around the entire device and doubles as the cellular antenna for the LTE version. On the top and bottom of the iPad Pro’s edges sit two pairs of speakers, while the bottom edge also features the brand new USB-C port. Its back is completely flat, save for the 12-megapixel camera. The right side of the iPad Pro is home to the new Apple Pencil, which wirelessly charges when magnetically attached. There are magnets hidden throughout the iPad Pro for attaching everything from the Pencil to its Smart Keyboard Folio.

Both the 11-inch and 12.9-inch iPad Pro have incredible high-resolution displays with rounded corners like those found on the iPhone X. Surrounding it is a thin bezel, one that ditches the aging Touch ID button for the front-facing TrueDepth camera; that camera enables features like portrait mode photography, Face ID for secure logins, and Animoji. Unlike Apple’s smartphones, there’s no unsightly notch in the screen, making me thankful for small blessings. Reading comics on that huge display is a treat, and watching films on it might convince me to break my rule about tablets in bed.

Instead of Apple’s own Lightning port, the iPad Pro sports the more versatile and reversible USB-C port, like the company’s latest MacBooks. Apple has released its own set of dongles (great) for USB-C devices that let you input SD cards, connect to external displays, or use a wired Ethernet connection. A USB-C port means you’ll have an easier time connecting your iPad Pro to other USB-C devices, like cameras or hard drives, with a single cable. You can also use that port to charge other devices, like your iPhone or even another iPad. Unfortunately, more robust support for browsing external storage devices and USB drives is nonexistent, but you can import photos from these external devices using the Photos app. If you know you’ll be connecting to external monitors, it’s best to check to see if they require cables that support higher data transfer rates or else you’ll find yourself disappointed and confused.

While switching connectors may have been a smart move, the iPad Pro did get rid of the headphone jack, an annoying choice for a device targeting creative professionals (which includes musicians) who love experimenting with audio production apps, many of which are featured in Apple’s advertisements. Don’t worry, you can get a USB-C to 3.5mm dongle if you’ve got $9 burning a hole in your pocket after your (minimum) $799 purchase.

Inside the iPad Pro is Apple’s A12X Bionic chip, an upgraded version of the one inside the iPhone XS, which has an even more powerful graphics processor. It’s blazing fast, and lag when switching apps is basically nonexistent. Apple claims the iPad Pro is faster than most laptops sold in the last year, and after opening every huge app I owned, running a few performance benchmark tests, editing nearly a dozen photos, and playing some graphically intense games, I believe it.

Along with the iPad Pro comes an updated pair of accessories for the device, which highlight how capable the device can be. The revamped Apple Pencil is a marked improvement from the first version of the pressure and tilt-sensitive stylus. Gone is the glossy white exterior and easily misplaced cap, replaced by a stylus with a touch-sensitive area for quickly switching between tools during work, and a flat edge that lets it snap to the iPad Pro’s magnetic side for easy storage and dead simple wireless charging. The pencil also features a touch-sensitive area near where your fingers naturally rest, and double-tapping it allows you to easily switch brushes and tools in supported apps.

The Smart Keyboard Folio, on the other hand, could do with a few more buttons, including some for media playback or other utilitarian functions. It would also benefit from a materials change. Unlike the iPad’s leather folio covers, the new keyboard folio’s rubbery exterior is easily prone to acquiring dust, detritus, and fingerprints until cleaned.

All that power and speed is great. But, when it comes to doing serious work, many advantages of the tablet interface are regrettably undone by the software the iPad Pro runs: iOS 12, an operating system that’s quite far from being a proper replacement for a true desktop OS.

Not to say that it’s all bad. iOS 12 is pretty impressive, actually! It’s intuitive, and definitely easier to get up and running compared to options like Windows 10 or Apple’s own macOS. Apps are laid out right on the home screen, managing settings and preferences is mostly straightforward, and swiping, pinching, and tapping apps is a lot easier to explain to your family and friends compared to extracting and installing some app on a traditional computer.

Being creative is great and all, but when it comes to engaging in more functional tasks, iOS is lacking in important departments. You can run apps side-by-side, but only if they support Apple’s restrictive windowing system. Simple tasks done on a PC are complex on the iPad Pro, and doing things Apple’s way means opening GIFs without preview thumbnails in the Files app, tapping various part of your screen to figure out which app is the one ready to accept your keyboard inputs when running side-by-side, or just dealing with your keyboard typing in the wrong app. Even unzipping compressed files is too complicated for iOS to understand without a particular app, or a trip into the compressed group of files itself to extract them piecemeal. The mundane tasks performed on your PC with a mouse are more complicated without one. Granted, you may have bought an iPad to be rid of the mouse, but there’s a reason every desktop comes with one, and every laptop, touchscreen or otherwise, has a trackpad: they’re useful.

With the iPad Pro, Apple hasn’t redesigned the way we work. Instead, it’s given us new input options, deprecated old ones, and siloed the most enticing software in apps while ignoring the vital infrastructure a computer provides. If you want to make the iPad your computer of choice, you’ll have to dive deep into everything Apple offers for power users. That means learning the handy system-wide keyboard shortcuts, and being deliberate about the tasks in which you engage. It means combing through or making your own automated tasks using Apple’s Shortcuts app. It means possibly spending even more money on adapters, dongles, new hardware, and newer apps to do what you’ve been doing on your PC, no add-ons needed.

I say all this as a writer, and as someone who merely dabbles in the creative tasks Apple says the iPad Pro is for. I’m no DJ, nor am I a professional shutterbug, but I do take (and print) a lot of pictures. For those creative types, I would say the iPad Pro is a very capable secondary device, one you could bring with you when you’re going on vacation, traveling light, or don’t plan on doing anything truly mission-critical.

While the bulk of this article was written on the iPad Pro, all edits and other tasks necessary for getting this review online were done on a MacBook Pro, thanks to the iPad’s inconsistent handling of our publishing system. Text would disappear, changes would go unsaved, and so on. Out of frustration I would keep my laptop next to me while typing, doing my best to avoid opening the lid until the annoyances grew too great.

The iPad Pro is a stellar device, especially if you hate taking a laptop around to enjoy things like movies or games. It’s thin, light, has a high-resolution display, and has an ecosystem of thousands of apps to choose from. The Apple Pencil is fantastic, and makes drawing, painting, writing, and annotating feel more fun than it should be.

But this is still an iPad. And the cheapest iPad, at $329, features what you’ll love most about Apple’s tablet with a far more reasonable price tag. It supports the first-generation Apple Pencil, has a perfectly sized 9.7-inch Retina display, and runs all the apps you’ll need to get your photo editing and music production done. The iPad Pro is capable of many things, but the software is holding it back from its true potential. Here’s hoping iOS 13 brings the portable powerhouse closer to the PC Apple so desperately wants to get rid of. 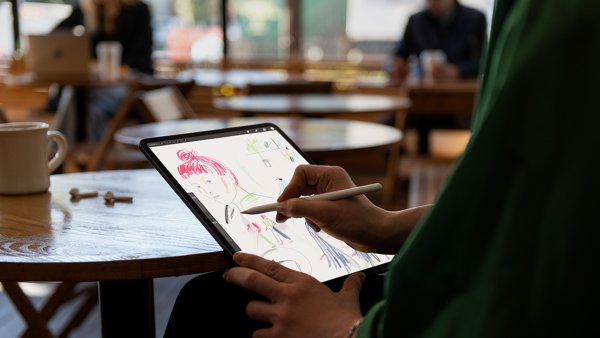 Apple's New iPads Are a Mess for Music Lovers. Here's How to Fix Your Headphone Headaches
Next Up: Editor's Pick