It’s a blessing to be able to consider the best performances of the year without having to make any of those wretched, Academy of Motion Picture Arts and Sciences-mandated distinctions between “lead” and “supporting”—even if it’s necessary to work out those divisions when you’re handing out statues. But if you’re watching movies for fun, why worry about whether or not John C. Reilly is a “lead” in Jacques Audiard’s wonderful oddball western The Sisters Brothers, or whether Olivia Colman really is the star of Yorgos Lanthimos’ delightfully wicked—yet ultimately moving—semi-historical drama The Favourite? The pleasure of watching actors at work, in big roles and small, at the center of a film or glowing somewhere around its margins, is one of the great privileges of moviegoing. Here are 10 of my favorite performances from 2018.

Gus Van Sant’s portrait of recovering alcoholic (and quadriplegic) cartoonist John Callahan, played by Joaquin Phoenix, didn’t get enough love. But Jonah Hill’s performance as Donny, a sort-of guru to Callahan, shouldn’t be overlooked. Nearly unrecognizable with his beard and flowy blond Caucasian-Jesus hair, Hill’s Donny is a calming presence, a cool stream in the midst of a forest wildfire. Callahan really needed a Donny—but nearly all of us could use one.

Remember when Lady Gaga was cast as the lead in the oft-remade A Star Is Born, and the big question was: Can she carry a movie? Almost nobody is wondering now. Gaga’s performance is a delight, revealing shadows and contours that perhaps not even her biggest fans had noticed before—like a Cubist painting that offers some new angle every time you look.

In 1962, Don Shirley, a classically trained pop pianist of Jamaican descent, toured the American South, with a white driver and bodyguard in tow. Peter Farrelly’s open-hearted film Green Book chronicles the at-first uneasy friendship between that driver (Viggo Mortensen) and Shirley, played here with sagacity and elegance by Ali. Ali shows how much fortitude and discretion it took Shirley to fend off hostility—for more reasons than one—in the country he called home. There’s no bitterness in this portrait—it’s too warm and funny for that. But with little more than a sidelong glance here and there, Ali makes one point clear: we haven’t come as far as we’d like to think.

In this wickedly audacious little picture, British actor Olivia Colman plays the real-life Queen Anne as a nervous, insecure ruler who’d rather cuddle her 17 pet rabbits than bother with affairs of state. When she falls prey to the cerebral and sexual charms of two members of her court (Rachel Weisz and Emma Stone), her innermost vulnerabilities are laid bare. Colman’s performance isn’t easy to pin down: in some ways the Queen is as wily and as manipulative as the two celestial seductresses in her orbit. But that’s what makes Colman such a joy to watch. Her mystery is nothing short of regal.

There was only one Freddie Mercury; there can never be another. Even so, his spirit courses through Rami Malek in a movie that’s less a biopic than a rapturous embrace. So many groups are vying for ownership of Mercury—Is he a gay icon, or a symbol of misunderstood pansexuality?—but Malek’s fluid energy fills the screen beyond any defined boundaries. This is a marvelously complex performance, one that captures Mercury’s emotional fragility as well as his magnificent, beyond-the-rainbow swagger.

5. Melissa McCarthy, Can You Ever Forgive Me?

You might not think you want to see a movie about a neurotic, anxious writer perched at the abyss of failure. But then you’d miss Melissa McCarthy’s bold and sometimes bitterly funny turn as real-life literary forger Lee Israel. McCarthy’s performance is fearless in the best way: she doesn’t care if you like the taciturn, off-putting Israel or not. Before you know it, you feel everything for her. Her signature is genuine.

This era of hip parents who want to be their kids’ besties opens a whole new world of conflicts to explore. In Hearts Beat Loud, Kiersey Clemons plays a daughter whose sometime-musician dad (Nick Offerman) wants her to form a band with him, even as she yearns to break out on her own. Clemons is marvelous as the kid who’s forced to talk sense into the parent: her character’s kindness is as evident as her frustration—there’s a kind of conscientious glow around her. Clemons also has a lovely singing voice, clear and airy as a muslin curtain. Yet there’s nothing weak about it, or about this character’s sense of self.

In this vigorous and inventive western, Reilly plays a crooked gun for hire who’s desperate to go straight. His sibling and partner (Joaquin Phoenix) doesn’t get it. He also doesn’t get why his brother carries an old paisley shawl in his pack. But when Reilly pulls out that shawl—given to him by the woman he loves—and inhales its muted perfume as if it were life’s breath itself, his quiet yearning takes shape before our eyes. It’s as subtle and gorgeous as a plume of smoke—and that’s Reilly’s particular brand of magic.

If you’re going to make a movie about guilt and spiritual self-flagellation, as Paul Schrader has with First Reformed, you need a great face. Ethan Hawke plays the pastor of a small rural congregation who’s torn between worrying about the world and punishing himself for what he views as past failures; both threaten to destroy him. With words and gestures but especially with that perpetually watchful, perceptive face, Hawke conveys both the selfishness and the deep suffering of people who just can’t let go of their own pain. It’s as if the tree of life is etched on his forehead.

You can study acting your whole life and never feel you’re getting it right. Or you can be a total nonprofessional—someone who never dreamed of pursuing an acting career—and deliver a performance so finely textured that no one would guess you’d never before stepped in front of a camera. Aparicio, who plays Cleo, the domestic worker in Alfonso Cuarón’s semiautobiographical Roma, was teaching school in Oaxaca when the director found her. Lucky for him. Her performance is the kind of jewel a filmmaker could seek forever and never find. 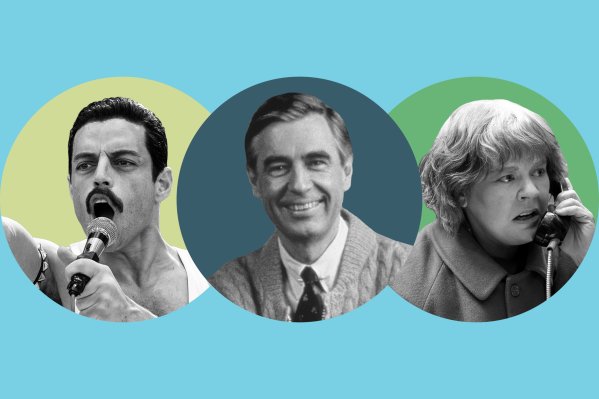