The best of this year’s fiction deals with prisons of all kinds — literal ones, but also dead-end jobs, luxury apartments and uncomfortable home states. Vibrant protagonists struggle against the confines of their worlds in novels by the likes of Rachel Kushner, Tayari Jones, Ottessa Moshfegh and more. But as with all great stories, there’s hope to be found in these pages. There’s resilience to be gained and hard-earned escapes to be savored. Here, the best fiction books of 2018.

Nature — and the urge to protect it — is what ties together the lives introduced in Powers’ sweeping 12th novel. A young artist descended from chestnut farmers, a field biologist, a Vietnam War veteran and six other characters brush up against the mysterious power of trees and, intertwined, sound an urgent call to preserve our environment.

Groff’s short stories study Florida, where treacherous weather and animal predators provide a backdrop to the struggles of characters like a homeless teacher, a betrayed husband and a writer reminiscent of Groff herself. The author of Fates and Furies, who moved to Florida over a decade ago, channels her palpable ambivalence toward her adopted state.

Margot and her teen daughter Pearl live in a car next to a Florida trailer park, poor but happy. When a dangerous man enters their lives, Pearl finds herself alone and enmeshed in a world of guns. Clement, a master of figurative language, crafts a moving coming-of-age story set in an America where rough justice sometimes rules the day.

7. There There, Tommy Orange

In Orange’s fiery debut, 12 city-­dwelling Native Americans head to the Big Oakland Powwow, each with different aims. The author masterfully knits their stories together at the event, which leads to a terrifying climax. There There is at once a poetic and suspenseful page-turner and a subtle condemnation of a shameful history.

Buy now: There There

Wash, a child slave on a Barbados plantation, befriends his new master, an abolitionist scientist. When a man dies and Wash finds himself in danger, the pair embark on an epic journey across continents, testing the strength of their commitment to each other. In precise prose, Edugyan crafts an inspiring story of freedom and self­discovery.

Miller’s retelling of a Greek myth sets the sorceress Circe free from the prison of a male narrative. In The Odyssey, Circe makes her name by turning the hero’s sailors to swine. In this best seller, she’s defined instead by her resilience as a woman threatened by gods and mortals alike. Miller plays with the classics to upend ancient perspectives on gender and power.

4. My Year of Rest and Relaxation, Ottessa Moshfegh

A sharp, beautiful, privileged — and deeply unhappy — ­woman in her early 20s employs the most ethics-­immune psychiatrist in New York City to help her sleep for a year, hoping she’ll emerge reborn. Moshfegh, author of 2015’s award-­winning Eileen, is the rare talent capable of inventing so strange and claustrophobic a premise. From it, she spins a darkly funny tale of heartache and redemption.

Buy now: My Year of Rest and Relaxation

In Jones’ novel, Atlanta couple Celestial and Roy are married for only a year when Roy, a black businessman, is wrongfully convicted of a violent crime. In chapters that shift between the perspectives of a husband in prison, a wife losing grip of their bond and a friend stuck in the middle, Jones illuminates the waves of injustice and heartbreak that unravel families entangled in a flawed judicial system.

Halliday’s three-part novel debut made headlines for its first section, about the relationship between a young editor and a writer reminiscent of Philip Roth, with whom she had a real-life romance. But it’s the subtlety and skill with which she ties that story to another — about an Iraqi American detained by immigration in 2008 at London’s Heathrow airport — that cements her place as an essential new voice in fiction.

Romy Hall is a mother to a young son and a former dancer at a San Francisco strip club. She’s also starting two life sentences at a miserable women’s prison in California. Kushner, a two-time National Book Award finalist, slowly and deliciously unfolds the tapestry of Romy’s ­backstory — ­infusing mystery and humor in unlikely places — while interrogating the harsh realities of the U.S. prison system. 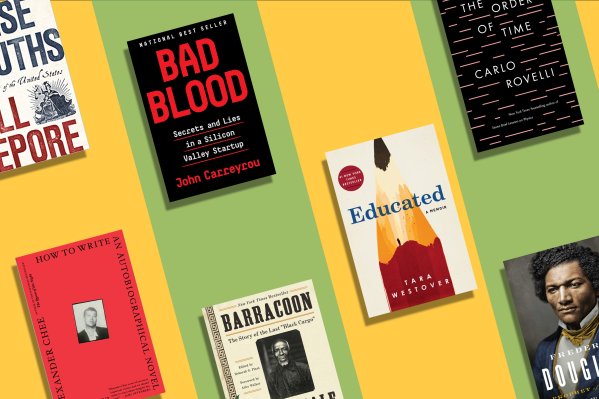