The FDA Is Severely Restricting the Sale of Flavored E-Cigarettes. Here's What to Know

The Food and Drug Administration (FDA) on Thursday followed through on a rumored plan to significantly restrict the sale of flavored e-cigarettes in an effort to keep young users away from tobacco products.

“The bottom line is this: I will not allow a generation of children to become addicted to nicotine through e-cigarettes,” said FDA Commissioner Dr. Scott Gottlieb in a statement. “We won’t let this pool of kids, a pool of future potential smokers, of future disease and death, to continue to build. We’ll take whatever action is necessary to stop these trends from continuing.”

That action, according to the statement, starts with severely limiting the sale of e-cigarettes in all flavors except mint, menthol and tobacco; unflavored e-cigarettes are also unaffected by the policy. Vapes in flavors such as fruit and candy, which the FDA says are particularly appealing to youth users, will now only be sold through online and in-person vendors with age restriction practices in place, such as tobacco and vape shops, retailers with specified age-restricted areas or stores where vapes are kept out of view of and inaccessible to minors at all times. Under the policy, all-ages stores such as gas stations and convenience stories can no longer sell flavored vapes in full view of minors.

E-cigarettes were designed to give adult smokers a healthier alternative to cigarettes, but the products have become popular among kids and teenagers. Recent research shows that kids and teens may be more likely to smoke cigarettes and use other tobacco products if they pick up vaping. Data from the Centers for Disease Control and Prevention (CDC) showed that as of 2017, about 12% of high school students vaped, making e-cigarettes the most popular tobacco product in that age group — and the FDA says use among high school and middle school students has risen by 78% and 48%, respectively, since then. About 3.6 million kids and teenagers in the U.S. vape, the FDA says.

Menthol and mint flavors escaped the new ban, Gottlieb said in the statement, because they’re more popular among adults than children, and because restricting access to them could push current users toward menthol cigarettes. Gottlieb emphasized in the statement that e-cigarettes, which contain fewer cancer-causing chemicals than traditional cigarettes and create an aerosol by heating a typically nicotine-packed liquid in a handheld vaporizer, can be a valuable tool for adults looking to quit smoking.

Tony Abboud, executive director of the Vapor Technology Association, cautioned that restricting access to flavored products could imperil that possibility.

“Commissioner Gottlieb clearly understands the important role e-cigarettes, specifically flavored products, play in transitioning adult smokers off of deadly, dangerous combustible cigarettes,” Abboud said in a statement. “However, every ‘speed bump’ that FDA puts up on the off-ramp for adult smokers is a threat to public health. By impeding adult access to life-saving flavored e-cigarettes, FDA is restricting the millions of adult smokers from living healthier lives.”

Gottlieb also said in the statement that the FDA is moving forward with plans to eventually ban menthol and other flavorings from cigarettes and cigars in an effort to make them less appealing to young people. The agency “intends to propose a product standard that would ban flavors in all cigars” and “will advance a Notice of Proposed Rulemaking that would seek to ban menthol in combustible tobacco products, including cigarettes and cigars,” the statement says. It is not clear when these policies could take effect.

The e-cigarette ban comes just two days after Juul, the market’s leading e-cigarette company and a favorite brand among teenagers, announced that it would voluntarily stop selling most flavored products in retail stores and add additional age-restriction measures online to prevent people under 21 from buying its products. The company also shut down its U.S. Facebook and Instagram accounts, which some have accused of marketing its products directly to young people.

“Our intent was never to have youth use JUUL products,” CEO Kevin Burns said in a statement. “But intent is not enough, the numbers are what matter, and the numbers tell us underage use of e-cigarette products is a problem. We must solve it.”

Juul’s announcement followed reports last week that the FDA was planning to ban most flavored products. The FDA first teased a flavored products restriction in September and has seized thousands of pages of documents from Juul and cracked down on retail sales to minors.

While the new policy is extensive, Gottlieb said in the statement that more regulatory action could follow if future data does not suggest that fewer kids are using e-cigarettes.

“If the policy changes that we have outlined don’t reverse this epidemic, and if the manufacturers don’t do their part to help advance this cause, I’ll explore additional actions,” Gottlieb said. “We’ll leave no stone unturned.” 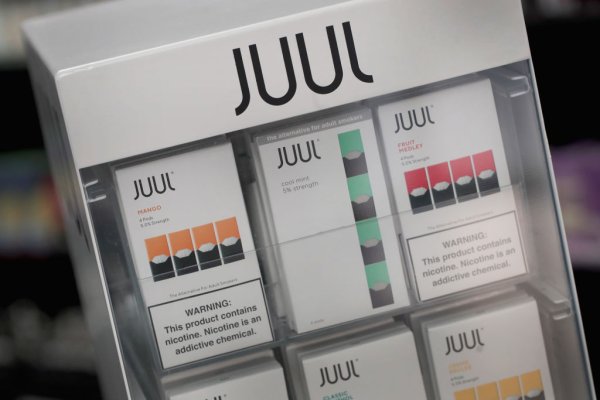