'At This Point Everybody Is Qualified.' Michelle Obama Jokes That Sasha Should Run in 2020

Former First Lady Michelle Obama thinks her daughter, Sasha, has a fighting chance against President Trump in the 2020 Presidential elections.

In an “Good Morning America” interview with ABC’s Robin Roberts on Monday promoting her new memoir, Becoming, Michelle Obama reflected on the state of the union, “at this point everybody is qualified and everyone should run,” she said.

Obama said she personally would not have any interest in running in 2020. She instead suggested her 17-year-old daughter who would not technically be qualified to run for office since she is too young.

“‘Sasha, you’ve got some free time. I think you’d do a great job’,” said Obama jokingly talking to her daughter.

But then she got serious.

“Anybody who feels the passion to get in this race, we need them in there. And I think that process will play itself out,” Obama told Roberts.

Watch the interview below. 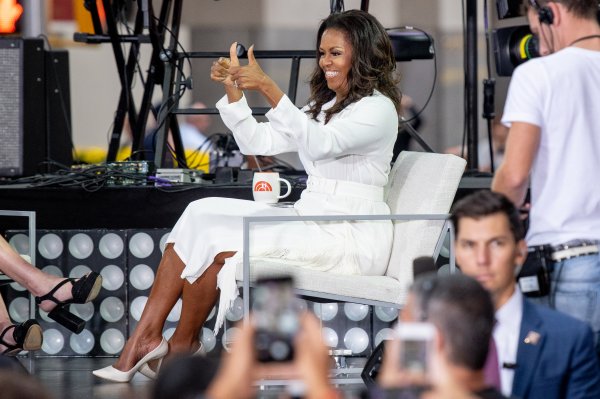 'Fear is the Coward’s Way of Leadership.’ Michelle Obama Tells Oprah Why She’s Hopeful About America
Next Up: Editor's Pick