A police officer shot and killed an armed security guard while responding to a shooting at a suburban Chicago bar early Sunday, a federal lawsuit says.

Jemel Roberson, 26, died following the shooting at Manny’s Blue Room Lounge, located south of Chicago, where he worked, according to a lawsuit filed by the attorney Gregory Kulis on behalf of Roberson’s family. Four other people sustained non life-threatening injuries in the shooting, including a man who was believed to have fired a gun before police arrived at the scene, Cook County sheriff’s spokesperson Sophia Ansari told the Associated Press.

Witnesses said Roberson, who was black, apprehended a man involved in the bar shooting after he opened fire. As police arrived, Roberson was holding “somebody on the ground with his knee in his back, with his gun in his back like, ‘Don’t move,'” witness Adam Harris told WGN9.

“Everyone was screaming out, ‘Security!’ He was a security guard,” Harris said. “And they still did their job, and saw a black man with a gun, and basically killed him.”

“The subject of the officer shot was later pronounced deceased at an area hospital,” Delaney said.

The Illinois State Police Public Integrity Task Force is investigating the officer-involved shooting, according to the statement.

The man who fired the initial shots at the bar, in what is believed to be a dispute, remains hospitalized, Ansari said. His name has not yet been publicly released. Charges are pending against him.

Ansari said Roberson, who was the father to a 9-month-old boy, was licensed to carry a firearm.

Kulis, an attorney representing Roberson’s family, has filed a civil rights lawsuit seeking more than $1 million. He said Roberson was wearing a hat that said “security” on it when he was shot. 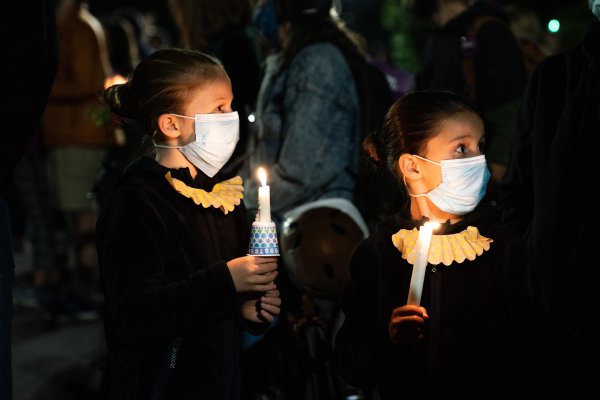 How Ruth Bader Ginsburg Became a Pop Culture Icon
Next Up: Editor's Pick