In Yemen, Trump's 'America First' Has Morphed Into 'Saudi First'

People from Yemen living in New York, held a protest against the Yemen War in front of the U.N. Headquarters on Sept. 27, 2018.
Turjoy Chowdhury/NurPhoto via Getty Images
Ideas
By Wardah Khalid
Khalid is a policy analyst, activist, and speaker focusing on Middle East conflicts, refugees, and Islam in America. Follow her on Twitter @wardahkhalid_

Human rights activists, aid workers, and members of Congress welcomed Friday’s news that the Trump Administration would finally end refueling of the Saudi coalition in Yemen. It seemed that after years of pressure, the Administration was at last heeding calls to diminish the U.S.’s role in quite literally fueling the bloody war and world’s worst humanitarian crisis.

Shortly after the announcement was made, however, the Saudi government issued a statement indicating that it had “requested cessation” of the fueling because it had enhanced its own capabilities to do so. U.S. Defense Secretary Jim Mattis voiced support for the Kingdom’s decision, saying the U.S. was consulted.

It was yet another reminder that when it comes to Yemen, instead of making decisions independently, the U.S. remains at the beck and call of Saudi Arabia.

For four years, the U.S. has supported Saudi Arabia in the war in Yemen through intelligence sharing with coalition forces, logistics support, and facilitating billions of dollars in arms sales. Among the weapons sold include a laser-guided bomb that was used to kill 40 Yemeni children on a school bus in August. President Barack Obama had halted the sale of precision munitions after the deadly bombing of a funeral hall in Sana, Yemen in October 2016 that killed 155 people, but these were reinstated just five months later under the Trump Administration.

Prior to taking office, Trump campaigned on breaking away from the foreign policy establishment. But in many ways, he has embraced its most hawkish elements. The appeal of weapons’ sales seems a likely motivation for continuing to stay involved in Yemen. Saudi Arabia is the U.S.’s largest buyer of weapons, racking up $14.5 billion in purchases since Trump announced a $110 billion arms deal with the Kingdom in May 2017 (though that number is reported to have been inflated, as much of it was negotiated under the Obama administration).

It also is why he has tried to stay out of conflict on other issues with the Kingdom, such as pulling the U.S. out of the Iran nuclear deal and cautiously responding to the death of journalist Jamal Khashoggi, who was killed at Saudi Arabia’s Istanbul consulate on Oct. 2. even citing a fear of losing jobs as reason for the latter. (Analysts have stated that it is highly unlikely any jobs would vanish if Saudi money disappeared, though). Secretary of State Pompeo did the same when staff raised concerns about the civilian toll in Yemen.

Trump’s “America first” has morphed into “Saudi first,” and innocent Yemeni children, women, and men are paying the price. U.S. involvement in the conflict has contributed to thousands of civilian deaths, a majority of which were a result from airstrikes carried out by the Saudi-led coalition. In addition, millions are without access to clean drinking water, the cholera outbreak continues to accelerate at 10,000 new cases per week, and half of the population is at risk of famine. Many of the half a million children suffering from chronic malnourishment will likely die if the conflict does not end soon.

Ceasing coalition refueling won’t be enough to end the nightmare. But it does present an opportunity for concerned Americans to demand accountability in our participation in a conflict that is sorely lacking in U.S. direction and decision. Constituents should push members to support H.Con.Res.138, a bipartisan resolution to force a floor vote to end U.S. participation in the hostilities in Yemen. On the Senate side, Senator Bernie Sanders (D-VT) has stated that he will bring its counterpart, SJ Res 54, to the floor for another vote after it was tabled in March.

Washington’s involvement in the terrible war in Yemen in order to promote Saudi Arabian interests has gone on long enough. Continuing on this dangerous path taints America’s standing in the world as a supporter of egregious human rights violations, provides minimal to no economic benefits for the country, and could potentially lead us to war with Saudi Arabia’s regional rival, Iran. The U.S. must take responsibility for its role in this horrendous conflict and terminate the blank check and unquestioning support of a regional power unconcerned with the repercussions within and outside the Middle East.

It is time for Americans to take back the narrative—and engage in foreign policy on U.S. terms. 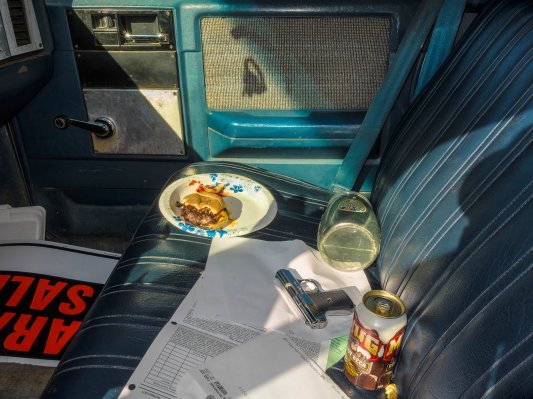 The Insides of Veterans' Cars Shed Light on Their Fight for Normalcy
Next Up: Editor's Pick