The Militarization of the U.S.-Mexico Border Is Not a New Idea

President Trump has said that as many as 15,000 U.S. troops could be deployed to the border with Mexico as approximately 3,500 migrants from mainly Honduras make their way north. His critics were incensed, saying he was playing politics with the immigration issue as elections fast approached. House Armed Services Committee ranking member Adam Smith (D-WA), for example, said that “the president’s (decision) is fundamentally wrong and a political act at a time when leadership is needed. We should not be militarizing the border, and President Trump has offered no clear idea of what our forces are going to do there.”

There are legitimate reasons to be skeptical of Trump’s motive for deploying troops to the southern frontier. His claim that the migrant caravan has been infiltrated by terrorists and gang members has raised eyebrows, as no evidence has been presented to suggest that such a thing has occurred. Still, it is important to remember that the “militarization” of the border is not a new idea. In fact, Richard Nixon started a process of militarization in 1969 that has continued until today.

On September 21, 1969, the Nixon administration shut down the U.S.-Mexico border in an effort to stop the flow of drugs coming into the states. Border crossings along the 2,500-mile divide were clogged as American customs agents searched land vehicles and pedestrians traveling on foot. Radar-equipped government planes circled overhead in pursuit of rogue aircraft, and Navy patrol boats of the kinds used to hunt Viet Cong in Vietnam stalked suspicious sea vessels. The operation continued for several weeks, gravely affecting businesses which relied on customers from both sides of the border and preventing Mexican workers from getting to their jobs in the U.S. “I’ve heard of the Berlin Wall, but I never thought I’d see it” said an exasperated young man whose mother was detained for trying to carry prescription medication across the border.

Operation Intercept was finally lifted in mid-October — a major relief for the many Americans and Mexicans who traversed the divide each day. A report from the American consulate in Tijuana said that residents “loudly cheered” when border traffic was allowed to move again, though their “cheers soon turned to grumbling when border inspections, while eased, did not revert to superficial pre-Intercept standards.” In fact, those standards would never return. From that point on, the U.S. government prioritized Latin America’s role in the drug trade. The U.S.-Mexico border had become a flashpoint in the emerging drug war, and would be subject to increasingly intense scrutiny from then onwards.

By 1972, the drug war had reached the top of Washington’s domestic agenda. A TIME article written in September of that year noted that “the Bureau of Customs, charged with policing thousands of miles of wide-open frontier,” was “due to add 330 new men to its hard-pressed 532-man border patrol force.” It went on to describe a scene that resembled the Berlin Wall, the Korean 38th Parallel, or some other heavily-monitored barrier, reporting that “Nixon ordered the Air Force to help out by installing new extra-low-level radar at sites in Texas and New Mexico, where it will be used to track the airborne smugglers who scoot across the Mexican border in light planes, avoiding detection by flying at cactus level.” In addition to the radar installations, Air Force and Air Guard squadrons were “ordered to maintain their F-102 and supersonic F106 interceptors on alert status, ready to scramble in five minutes.” Indeed, TIME noticed that officials with the Bureau of Narcotics and Dangerous Drugs talked “as if their job is to tear up the Ho Chi Minh Trail, not the international drug trade.”

Efforts to step up border security intensified in 1973 and into 1974, especially as the national conversations about drug trafficking and, increasingly, illegal immigration grew louder. An electronic fence, which some Border Patrol officers compared to the system (known as the “McNamara line”) used in Vietnam to detect North Vietnamese and Viet Cong troop and supply movements, was installed along the border in order to detect both illegal immigrants and drug smugglers. This type of barrier included pressure-sensitive devices, buried wires, and infrared detection equipment, and was designed to provide “intrusion prevention.” The construction of an actual physical fence had progressed very little (27 miles total) by this time, but the foundation for future border barrier projects had been laid.

Troops on the U.S.-Mexico border may well be a rare occurrence. But the U.S. has maintained a major Border Patrol presence there for decades. And, from 1969 onwards, the border was transformed from an open area where movement was relatively easy to an increasingly fortified frontier that has drawn more than one comparison to some other infamous international security crisis zones. In a 2011 Foreign Policy article, “The World’s Most Dangerous Borders,” the U.S.-Mexico divide was listed alongside such foreboding places as the Afghanistan-Pakistan border and the Korean Demilitarized Zone.

The migrant caravan traveling to the U.S. is making headlines primarily due to apprehensions about illegal immigration — an issue that has dominated the Trump Administration’s agenda. But before that topic became a cause for national concern, the militarization of the U.S.-Mexico border had already commenced. The drug war has been the catalyst for this effort longer than the immigration issue has, and the latter cannot be understood without first acknowledging how closely the two are interlinked.

Aaron Brown is a PhD candidate in history at Ohio University and a fellow with the university’s Contemporary History Institute.

Visit History News Network to see the footnotes for this article. 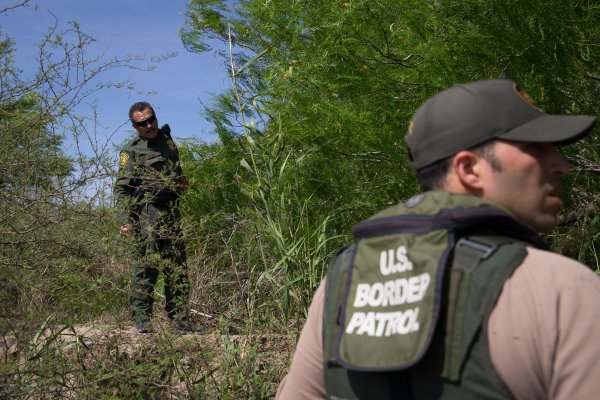