Putin and President Trump: Smiles and a Thumbs Up at Paris World War I Commemoration

President Donald Trump and President Vladimir Putin shared an oddly warm greeting during a ceremony marking the centennial of the armistice that ended World War I on Sunday.

The internet seems to think the pair greeted each other more like old friends than competing world leaders.

Trump, Putin and dozens of fellow world leaders gathered at the Arc de Triomphe in central Paris to commemorate the over 8 million people who died in World War I, which ended 100 years ago on Sunday. French President Emmanuel Macron led the ceremonies, warning of the continued danger of unchecked nationalism in a speech.

Trump smiled upon seeing Putin, a reaction that stood out among the relatively grim faces of other nearby world leaders Emmanuel Macron of France and Angela Merkel of Germany.

The smile prompted more than a few criticisms from online commentators.

Upon shaking hands, Putin flashed Trump a quick thumbs up in a moment caught on video.

Some took the opportunity to mock Trump’s continued chummy relationship with the Russian leader.

In the past, Trump has appeared to side with the Russian president over his own intelligence agencies and ignored warnings from his national security advisors not to congratulate Putin on his reelection. Putin has been accused of rigging the 2018 Russian elections.

The Kremlin said that Putin and Trump would meet in the midst of this weekend’s events, though Trump said earlier in the week that there was no time scheduled for a meeting. 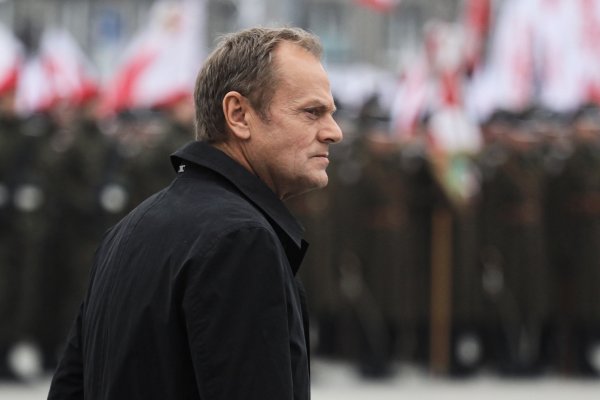 European Union President Says He Has 'Different Views' From President Trump on U.S.-Europe Relations
Next Up: Editor's Pick