'Nationalism Is a Betrayal of Patriotism.' President Macron Seems to Rebuke President Trump in World War I Commemoration Speech

(Bloomberg) — French President Emmanuel Macron confronted fellow world leaders with an uncompromising validation of international cooperation, calling on them to work together to maintain peace and avoid the spiral of war that marked the Armistice signed 100 years ago.

Standing in the Paris drizzle just feet from leaders including Presidents Donald Trump and Vladimir Putin, Macron used the culmination of a ceremony commemorating the centenary of the end of World War I to champion the work of international institutions such as the European Union and the United Nations.

“Patriotism is the exact opposite of nationalism, nationalism is a betrayal of patriotism,” Macron said. “In saying ‘our interests first and who care about the others,’ we erase what a nation has that’s most precious, what makes it live, what is most important: its moral values.”

Macron’s message was both a call to learn the lessons of 1918, when an armistice was signed that led to another world war with two decades, and a rebuke to present-day leaders such as Trump who shun the international order in favor of nationalist policies.

The weekend’s commemorations have been marked by contrasting shows of German-French reconciliation — with Chancellor Angela Merkel constantly at Macron’s side — and Trump’s testy isolation. The U.S. president set the tone for his trip by blasting Macron on Twitter for “very insulting” comments advocating a more integrated European security, and was then roundly criticized for skipping a planned visit to a U.S. military ceremony due to bad weather.

In a symbolic display of unity before his speech Sunday, Macron led the dozens of gathered leaders in a broad line up the Champs-Elysees. Trump and Putin arrived separately in their own motorcades. At the start of the ceremony, they shook hands and Putin flashed a thumbs-up.

During the ceremony Sunday, Macron sat with Merkel on his immediate right, with Trump just beyond the German Chancellor. Merkel and Macron have emerged as the leading defenders of the multilateral institutions created at the end of World War II, while Trump, who embraces what he calls “America First” policies, pronounced at the UN in September that he’s a “nationalist” who rejects globalism.

“Let’s add up our hopes and not our fears,” Macron said. “Let’s reject the fascination for turning in on ourselves, violence, and domination.” He listed climate change, poverty, hunger, inequality and “ignorance” among the global challenges to be tackled jointly.

Russian officials said the French had been the ones to ask that no separate Trump-Putin meeting be arranged Sunday in order not to distract from the solemn commemorations.

“We agreed that we wouldn’t break the schedule of the host country and at their request we’re not organizing any meetings here,” Putin told Russian state-run RT television after the Arc de Triomphe event. “But possibly we will at the G-20 or later. We’re open to dialog.”

The Russian president is hoping his personal ties with Trump, who regularly touts their good relationship, will at some point yield a softening of the U.S. approach to his country. So far, however, the tensions have only built, with the U.S. imposing new rounds of sanctions and vowing to pull out of a Cold War disarmament treaty.

Publicly, the Kremlin has played down the possible absence of a sit-down with Trump, saying the two leaders will have time for talks in a few weeks at the G-20 summit in Buenos Aires. The White House has also been cool about bringing the two leaders together amid the political pressure in Washington over alleged Russian meddling in U.S. elections.

The White House is eager to avoid a repeat of the controversy that blew up the last time they met. In Helsinki in July, Trump’s apparent acceptance of Putin’s denials Russia had intervened in the vote over the conclusions of U.S. intelligence triggered a wave of criticism in Washington and a push for new sanctions in Congress.

Since then, the U.S. has sent National Security Adviser John Bolton for two rounds of talks with Russian officials, but the only deal announced publicly was a vague agreement for the two leaders to meet again next year, possibly in Washington.

Trump on Saturday skipped a planned visit to Belleau Wood battlefield and cemetery because of heavy rain, sparking a storm of criticism for what some saw as disrespect to veterans. U.K. Defense Minister Tobias Ellwood was among those to rebuke Trump, saying that rain “did not prevent our brave heroes from doing their job.”

Earlier Saturday, Macron and Trump said they’d patched up differences over the twitter tussle, even as the showy friendliness of their past encounters was replaced by a stiffer interaction.

The U.S. president was also planning to skip the Peace Forum his host was organizing later on Sunday. Trump is scheduled to visit another military cemetery before departing Sunday.

As the other leaders gathered in the morning, Trump tweeted about the devastating wildfires in California, criticizing local officials for poor forest management. On the way to the ceremony, topless protesters from the Femen group ran into the street toward his motorcade before being detained by police.

Sunday’s ceremony included youths reading letters written by soldiers and civilians in the “Great War,” and ended with the traditional lighting of the flame on the tomb of the unknown soldier.

Macron paid tribute to the allies and opponents who battled for four years on French soil.

“France knows what it owes these fighters that came from across the world, France salutes with honor the death of soldiers that it fought,” he said. “The combat that’s most worth it is the combat for peace and for a better world.” 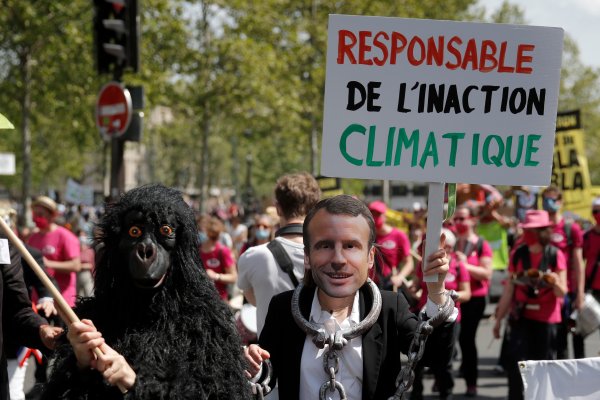