European Council President Donald Tusk delivers a speech on November 11, 2018. He warned that nationalism will be a "fundamental threat" to the European Union.
Grzegorz Michalowski—EPA/EFE/REX/Shutterstock
By Jones Hayden / Bloomberg

(Bloomberg)—European Union President Donald Tusk warned that nationalist sentiment will lead to a “fundamental threat” in the EU as the bloc prepares for legislative elections next year.

“I wish to clearly emphasize here that I see no coincidence in the fact that in virtually all of Europe, whether openly or more discreetly, those who are enthusiastic about Brexit, those who are more or less enthusiastic about Washington’s further steps towards isolationism, those who are flirting with Vladimir Putin with increasing intensity, they are all attempting, also more or less unambiguously, to persuade us that the European Union in general, or in its current shape, has no future,” Tusk said in a speech in Poland on Saturday.

“The problem is that today, those who are cheering on nationalism in Europe, those who are betting on disintegration and conflict, will inevitably lead to an absolutely fundamental threat,” Tusk said.

“I am talking here about the rise of nationalism and anti-European, not only rhetoric, but also anti-European emotion, in many European capitals,” he said. “This does not yet apply to today’s leaders, but these forces are growing before our very eyes. They are forces which back conflict rather than cooperation, disintegration rather than integration,” Tusk said.

“In a few months’ time, we will be electing the parliament in Europe,” Tusk said. “It cannot be ruled out that two political currents might occupy very powerful positions in that parliament: one, increasingly brown-shirted, unambiguously anti-European, looking more and more clearly towards nationalism, working against the European Union as such. The other current belongs to those who want to integrate the European Union as much as possible,” he said.

EU political parties are maneuvering in preparation for the May 2019 elections to the European Parliament amid a populist surge that could affect the direction of the bloc. In addition to electing EU lawmakers, the results also will affect the appointment of the European Commission president, who leads the bloc’s executive arm in Brussels. 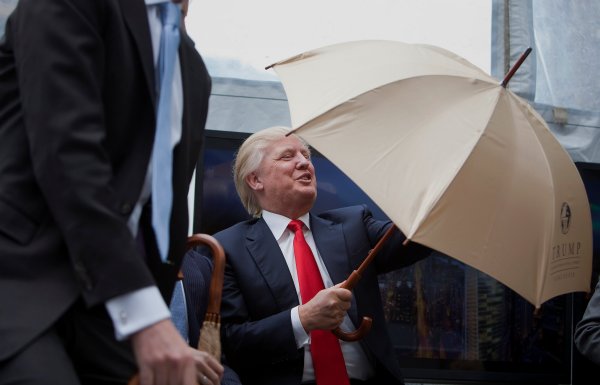 President Trump Faces Backlash After Cancelling World War I Ceremony Appearance Due to Rain
Next Up: Editor's Pick