Some Democrats Don't Want Nancy Pelosi to Be Speaker. But They Don't Have an Alternative

The same day that House Minority Leader Nancy Pelosi sent personalized letters to every member of her caucus, both current and incoming, “respectfully requesting” their support for her bid for speaker, a small group of Democratic lawmakers were on a conference call working to ensure that candidacy didn’t become a reality.

But while the math arguably could work at the moment in favor of Pelosi’s critics, the politics are working against them. One big glaring problem: they don’t have an alternative yet. And they’re up against a political mastermind who just led Democrats to the House majority for the first time in a decade.

In total, nine current lawmakers have explicitly said they would oppose Pelosi’s bid for speakership on the House floor in January: Reps. Tim Ryan — a possible 2020 presidential contender who unsuccessfully challenged her in 2016 — Seth Moulton, Kathleen Rice, Ed Perlmutter, Kurt Schrader, Filemon Vela Jr., Marcia Fudge, Bill Foster, and Brian Higgins. A tenth, Rep. Albio Sires, had initially been in the fray, but he announced Friday that he was supporting Pelosi.

At least nine incoming lawmakers have also said they would not vote for her, while a handful of others have issued calls for new leadership. While these members are a fraction of the caucus as a whole, they point to a potential math problem for Pelosi.

Democratic leadership elections are expected to be held at the end of the month. To clear that hurdle, Pelosi just needs to get a majority of her caucus vote. But in order to become speaker, Pelosi needs to get 218 votes on the House floor after the new Congress is sworn in this coming January. And that’s where some detractors are arguing she has a problem.

As it stands, the Democrats currently are projected to hold 229 seats; 13 races are still too close to call, but the polling website FiveThirtyEight posits that Democrats could win ten of them. If Democrats do gain a total of 239 seats, and there are no more defectors, Pelosi will clear the floor hurdle.

But the math is still tight And leaves little room for any changes. The lawmakers who are opposed to her candidacy are making their new members who share similar viewpoints, telling them that if they oppose her they will have adequate support from this faction, despite the inevitable promises for committee placements and fundraising that will come from leadership, according to one person familiar with the conversations.

Read More: Nancy Pelosi Doesn’t Care What You Think of Her. And She Isn’t Going Anywhere.

Of course, these numbers are in flux until the races are decided. There are legislative mechanisms that can protect new members who promised to vote against Pelosi, like having them not physically be present at the vote, which would lower the threshold for the total number she needs.

Its also unlikely that Pelosi – famous for her ability to count votes – would be touting her confidence if she wasn’t sure she would clear the threshold. Pelosi herself has also been making calls to new members, and on Thursday, she told CNN’s Chris Cuomo Thursday she is “100 percent” she will be the next speaker.

“Leader Pelosi is confident in her support among Members and Members-elect,” Drew Hammill, Pelosi’s Deputy Chief of Staff, said in a statement. “Democrats don’t let Republicans choose their leaders. The election proved that the GOP attacks on Pelosi simply do not work.”

The dissatisfaction with Pelosi mainly stems from the desire for new, younger leadership — Pelosi’s two top deputies, Reps. Steny Hoyer and James Clyburn, are also in their seventies —– a feeling compounded the fact that many junior members feel there are inadequate opportunities for advancement, according to conversations with Democratic aides. And of course, she is a foil for Republicans, who frequently used her in attack ads on the campaign trail this cycle to stir up their own support.

But while the mathematical calculation is a real thing, there’s a bigger problem for the anti-Pelosi faction to surmount, in addition to her own political negotiation skills: they don’t have a challenger. None of the ten lawmakers opposing her have stepped up to run against her. Ryan, who did it two years ago, has said he doesn’t intend to do it again. Neither does Moulton. And the lawmakers who their colleagues had considered the most likely to prevail on the floor — mainly, Rep. Hakeem Jeffries and Democratic Congressional Campaign Committee chairman Ben Ray Lujan — have already announced their bids for other leadership positions.

Pelosi seemed to shrug off the possibility of a challenger. “It doesn’t matter,” she told Cuomo when asked about it. “I’ve had a nominee every time.”

The group is expected to circulate a letter next week with all the members of the caucus, both current and future, who don’t have her support. One Democratic aide said that a challenger will emerge organically, if or when it becomes explicitly clear that Pelosi won’t be able to reach the necessary threshold. Rep. Steny Hoyer, the current minority whip who is running to be her top deputy in the majority, has said he will run for speaker if Pelosi lacks the votes, but Hoyer has said he is not anticipating that scenario.

But lawmakers who are supporting her are arguing that experienced leadership is exactly what is needed to steer the Democrats through what will surely be a turbulent Congress full of inevitable battles with a Republican-controlled Senate and White House.

“There’s no learning curve on this one. We need to have someone from day one that is very experienced,” said Rep. Adriano Espaillat, who is himself running for a lower level leadership position and announced his support for Pelosi on Thursday. Espaillat noted that he had been “open” to supporting other candidates (even though there aren’t any) but ultimately decided Pelosi was the right person.

“We cannot afford to have someone learning while the well being of Americans is on the line every day,” he said.

With Philip Elliott in Washington 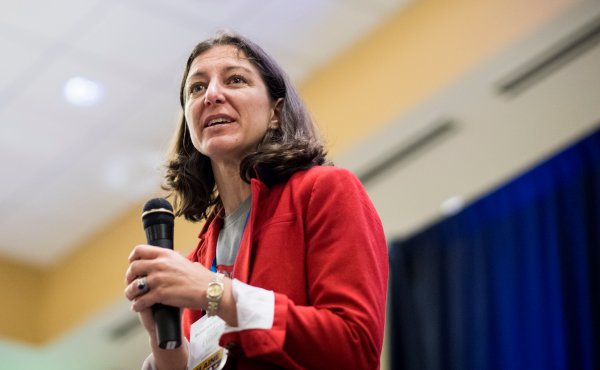 Women Veterans Prevail in Midterms
Next Up: Editor's Pick