All the Ways Fantastic Beasts: The Crimes of Grindelwald Connects to Harry Potter

Harry Potter fans have eagerly awaited an onscreen face-off between Dumbledore and Grindelwald since readers first heard about the famous duel in Harry Potter and the Deathly Hallows. Fantastic Beasts: The Crimes of Grindelwald brings the audience one step closer to this showdown: Gellert Grindelwald (Johnny Depp) returns after his surprise appearance in 2016’s Fantastic Beasts and Where to Find Them while a young Albus Dumbeldore (Jude Law) makes his onscreen debut.

The movie, which takes place in 1927, is full of other references to the original Harry Potter series and connects the plots of the two stories across decades. Fans who watched the trailers already know that a woman named Nagini features in the movie, as does the Mirror of Erised and the Elder Wand. Here are all the parallels and connections between the two stories — including that twist.

Dumbledore’s conflict with the Ministry of Magic

Meet young Dumbledore. At this time, Dumbledore is the Defense Against the Dark Arts professor at Hogwarts. We see him teach a class on Boggarts that closely parallels the lesson Professor Remus Lupin gave Harry and his classmates decades later.

Fans find out that Dumbledore’s uneasy relationship with the wizarding government began early in the professor’s Hogwarts career. Officials from the Ministry of Magic interrupt the class to confront Dumbledore: they allege that he’s working against them by sending Newt Scamander (Eddie Redmayne) to America and then Paris to protect Credence, an Obscurial, from Grindelwald.

When Dumbledore evades their questions, they forbid him from continuing to teach Defense Against the Dark Arts. A boy named McLaggen comes to Dumbledore’s defense, saying he’s the best teacher they’ve had. (Perhaps he is an ancestor of Cormac McLaggen, the boy who dotes on Hermione in The Half-Blood Prince.)

Another teacher ushers the students out of the classroom. It seems to be a young Minerva McGonagall (Fiona Glascott). This turn of events is slightly confusing, considering that some have noted that Pottermore previously listed Minerva’s birth date as October 1935, eight years after Crimes of Grindelwald takes place. Perhaps the woman in the movie is the mother or aunt of the teacher featured in the Harry Potter series, and the two witches share a name.

(L-R) Johnny Depp and Jude Law in The Crimes of Grindelwald
Warner Bros.

The Mirror of Erised

Dumbledore warned Harry away from the Mirror of Erised in Harry Potter and the Sorcerer’s Stone, revealing that wizards and witches had wasted away in front of the looking glass that showed them their deepest desires. Harry asked Dumbledore what he saw when he looked in the mirror, and his headmaster replied with “thick, woolen socks.” Harry suspects that this is a lie, and indeed author J.K. Rowling later clarified that Dumbledore saw his dead sister, Ariana, and the rest of his family.

Dumbledore seems to still be in love with the man, even as he recognizes Grindelwald’s potential for evil.

At the end of Fantastic Beasts and Where to Find Them, wizards modify the memories of an entire city of Muggles so that they won’t remember the magic they witnessed. To Newt’s surprise, Muggle Jacob (Dan Fogler) shows up at his flat at the beginning of Crimes of Grindelwald, and he remembers everything. Jacob explains that the spell only erased the bad memories — and that he had mostly good ones, so he remembered all of those.

This doesn’t seem to be how the Obliviate charm works in the Harry Potter books. For example, Hermione modified her parents’ memories so that they couldn’t recall that Hermione had ever been born in order to protect them from the Death Eaters. In doing so, she erased good memories, though she was able to restore them later. Similarly, when Gilderoy Lockhart Obliviates his victims, he erases all their memories — positive and negative.

Likely, the American wizards used a specific variation of the memory charm that only erases bad memories, though the movie never explains why.

Dan Fogler and Brontis Jodorowsky in The Crimes of Grindelwald
Warner Bros.

Flamel makes his onscreen debut in Crimes of Grindelwald as the owner of the safe house that Dumbledore suggests to Newt. Flamel looks so old that Jacob mistakes him for a ghost. But Flamel does not allow his age to stop him from fighting evil: He helps Newt and his allies contain the curse that Grindelwald casts at the end of the film.

What wand does Grindelwald have?

Though nobody speaks of the Elder Wand in this film, Grindelwald presumably already wields the most powerful wand in existence. According to Rowling’s timeline, Grindelwald steals the Elder Wand from wand maker Gregorovitch sometime between 1900 and 1926, before the events of Fantastic Beasts. Grindelwald presumably used the wand of Graves (Colin Farrell) when he was disguised as that wizard in the last film. Now, he has reunited with his old wand, which helps explain the power he wields in the graveyard scene at the end of the film.

Nagini in her human form

Rowling stirred up controversy when the Crimes of Grindelwald trailer teased a character who turned from human to snake. This woman turns out to be a Maledictus named Nagini, played by Claudia Kim. Credence meets her while the two are working at a circus. Unlike an Animagus, who can freely morph from human to animal and back, a Maledictus carries a blood curse that will eventually turn the person into the animal permanently.

Presumably, this Nagini is the very same one who will eventually become companion to (and Horcrux of) Voldemort. Fans might assume that Nagini was intrigued by the dark arts early in life since she inevitably ends up an ally of the most evil wizard in history.

But in Crimes of Grindelwald, when Grindelwald offers several wizards the choice to join his forces, Nagini resists, even as her friend Credence aligns himself with Grindelwald. It’s still unclear whether Nagini will go to the dark side or whether Voldemort will somehow enslave her after she’s permanently turned into a snake.

In The Half-Blood Prince, Snape makes an Unbreakable Vow with Narcissa Malfoy, promising to help her son Draco fulfill the promise he made to kill Dumbledore. In that book, fans learned that those who do not fulfill their Unbreakable Vow die.

In Crimes of Grindelwald, Tina (Katherine Waterston) is able to discern that Yusuf (William Nadylam) has made an Unbreakable Vow based on the scars on his hand. This seems to be another change from the original Harry Potter books: Had the Unbreakable Vow that Snape made with Narcissa left scars on his hand, surely Harry or another member of the Order of the Phoenix would have noticed and suspected something. Perhaps the scars only grow over time or that magic has evolved in the decades between Fantastic Beasts and Harry Potter.

Zoë Kravitz and Johnny Depp in The Crimes of Grindelwald
Warner Bros.

How is Leta Lestrange related to Bellatrix?

The first Fantastic Beasts movie teased the appearance of Leta Lestrange (Zoe Kravitz), presumably a relation of the evil Bellatrix Lestrange and her husband Rodolphus Lestrange from the Harry Potter series. We learn that while Leta was Newt’s girlfriend at some point; she is now engaged to his brother Theseus.

Fans might assume from her last name that Leta was intrigued by dark magic, like most of her relatives. But while Leta’s father was a truly horrible man who used the Imperius Curse to steal another man’s wife and impregnate her, Leta — the child born of that assault — does not inherit her father’s evil inclinations.

Leta feels guilty for switching out her crying baby brother for another baby on a ship to America, just to get a moment’s rest. When the ship sank, Leta’s true brother went with it. The other baby (Ezra Miller’s Credence) survived with Leta. That means that Credence is not a part of the Lestrange family, despite what many in the film suspected. Leta proves her story with a Lestrange family tree that looks similar to the Black family tree featured in Order of the Phoenix.

And at the end of the movie, Leta sacrifices herself in an attempt to fight Grindelwald and save Newt and Theseus. Leta’s untimely death means that she cannot be a direct ancestor of Bellatrix’s husband Rodolphus, since Leta did not have a child—at least that we know of. Rodolphus must be descended from another branch of the Lestrange family.

Dumbledore seems to have a more comprehensive knowledge of Obscurials than most wizards. A quick recap for those who have forgotten: Dumbledore’s sister Ariana was abused by some local Muggle boys who saw her casting magic when she was young. Ariana became sick afterward, suppressing her magic only to let it out in dangerous bursts.

Dumbledore’s father attacked the Muggles who hurt Ariana, and he was imprisoned in Azkaban. He never told anyone of Ariana’s problem, fearing that if he used that as a defense, the Ministry would take Ariana away from the family. Many fans now theorize that she was an Obscurial.

Dumbledore’s mother was later killed in an accident caused by Ariana, and Dumbledore became guardian to Ariana and his brother Aberforth. It was during that time stuck at home that Dumbledore met Grindelwald. The two exchanged ideas and plotted a new world order in which wizards ruled Muggles “for the greater good.”

The two planned to search for the Deathly Hallows together in order to achieve this goal, but when Aberforth confronted them, the three dueled, accidentally killing Ariana. Grindelwald fled, Dumbledore — overcome by guilt — realized the error in his thinking about Muggle rule and spent the rest of his life trying to defend innocents against dark magic.

Harry Potter learns this story from Aberforth in The Deathly Hallows. We see the impact that tragedy has on Dumbledore in Crimes of Grindelwald, as Dumbledore asks that Newt protect Credence, another Obscurial, and anticipates his eventual showdown with Grindelwald.

Notably, at the end of Crimes of Grindelwald, Newt and Dumbledore discuss how Dumbledore and Grindelwald swore not to fight one another. (Dumbledore had told the Ministry earlier he could not move against Grindelwald, leaving the audience to assume Dumbledore’s lingering feelings for Grindelwald held him back emotionally from the confrontation.)

Ezra Miller in The Crimes of Grindelwald
Warner Bros.

Who is Aurelius Dumbledore?

In the last minutes of the movie, Grindelwald’s followers decamp to Nurmengard, the prison that Grindelwald builds for dissenters — and eventually becomes his own jailhouse. There, Grindelwald reveals that Credence is in fact Aurelius Dumbledore, Albus Dumbledore’s brother.

We don’t yet know why a secret Dumbledore brother has never been mentioned before in the Harry Potter universe or how the Dumbledore baby ended up on the boat to America.Rita Skeeter would be disappointed to learn she hadn’t dug up all the dirt on the Dumbledores. (Though considering Dumbledore’s father was in Azkaban and his mother dead around the time Aurelius would have been born, it’s possible Grindelwald is lying to Credence. We break down the twist further here.)

Grindelwald offers one impressive piece of evidence: He tells Credence that a phoenix is said to appear to Dumbledores in times of need, and a phoenix does, indeed, appear to Credence. Could this possibly by a young Fawkes?

If Credence is, indeed, a Dumbledore, that means that Albus Dumbledore had two Obscurial siblings. Grindelwald feels that Credence’s power — and perhaps Dumbledore’s guilt over Ariana’s fate — will be his most powerful weapon against the great wizard. 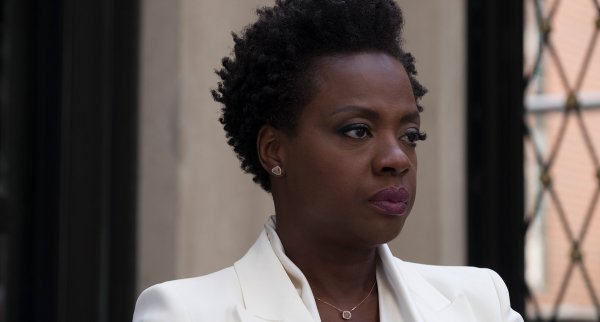 A Superb Viola Davis Leads Widows to New Heights
Next Up: Editor's Pick