One Person Was Killed in a Stabbing Attack in Melbourne, Police Say

One person was killed and two others injured following a stabbing spree in Melbourne, Australia on Friday that police say they are treating as a terrorism incident.

Law enforcement officers responding to a car fire in the city’s central business district were “confronted by a male brandishing a knife and threatening them,” Victoria police superintendent David Clayton told reporters Friday.

“Three people have been stabbed. Unfortunately, one is deceased at the scene,” he added.

Police shot and subdued the knife-wielding assailant, who later died in the hospital, Graham Ashton, the chief commissioner confirmed.

Ashton added that the suspect, who has not yet been publicly named, was known to counter-terrorism officials.

“From what we know we are treating this as a terrorism incident,” he said at a press conference.

“At this stage we don’t consider there’s any ongoing activity that the community needs to be concerned about from a safety perspective,” he added.

Police have cordoned off a section of the central business district in Australia’s second-largest city, but are not looking for other suspects.

The victims’ identities have not be made public, but Ashton said all three, including the deceased, are men.

Local ambulatory authorities said three people were assessed at the scene, according to News.com.au. One of the injured was reportedly in suspected critical condition with a neck injury, while another had sustained a head injury. The condition and injuries of the third person were not disclosed.

Police have urged anyone who witnessed the incident or had footage to contact them.

“This is an evil and terrifying thing that happened in our city and state today, and we condemn it,” he said. 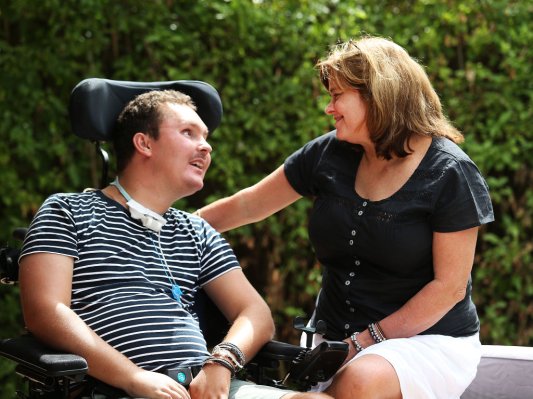