A Carbon Tax Proposal Failed This Week. But the Fight Is Just Beginning

A large majority of Washington state residents believe climate change is happening and understand that humans are to blame. But, even as the state passed a measure to tighten gun control and supported congressional Democrats, voters clearly rejected a chance to take a bold step with a first-in-the-nation carbon tax.

In rejecting the measure, which would have forced companies to pay for their carbon dioxide emissions, Washington voters rebuffed the policy mechanism that experts say is best equipped to stop global warming. They also underscored a central challenge of addressing climate change: even the most committed activists cannot agree on the best way to address the issue.

“Washingtonians agree that we must address global warming by weaning our state off of fossil fuels,” says Bruce Speight, director of advocacy group Environment Washington. But “voters reminded us that we don’t all agree on how to do that.”

Washington state has become a parable for the challenge. In 2016, voters rejected a ballot measure to create a carbon tax in large part because progressive groups did not support it, arguing that its approach was too conservative. The measure would have used the revenue from a carbon tax to fund a tax cut.

After defeating it, a coalition that included labor, civil rights and environmental groups among others got together to push this year’s measure. Instead of cutting taxes, the ballot initiative, known as I-1631, would have funded a slew of progressive causes and projects, from clean energy to relocating tribal lands threatened by rising sea levels.

Ultimately, the same features that made it a win for progressives made it a no-go for others. The editorial board at the state’s largest newspaper, the Seattle Times, called it “porous, lacking accountability and larded with special-interest payouts” and recommended a no vote. And, while big local players like Microsoft and REI endorsed the measure, many others sat out the race.

Likely the most significant impediment for the measure remained the longtime foe of any climate change legislation or regulation: the fossil fuel industry. A group of oil and gas companies pumped tens of millions of dollars into the campaign to defeat I-1631, far dwarfing the money raised in support.

But, cleverly, that campaign did not center on denying the science of climate change like companies have in years past. Instead, it poked holes in the specifics of the carbon tax proposal and played into the skepticism of how government might distribute the tax revenue.

The defeat represents a setback for those desperately concerned about reducing emissions. Approving the Washington state measure would have sent a powerful signal to other states that a carbon tax that funds government programs can be politically viable. And, at the federal level, it could have fueled proposals for programs along the lines of a so-called green New Deal favored by many progressives.

Washington voters weren’t alone in their rejection of environmental measures aimed at tackling climate change and related environmental issues on Tuesday. In Arizona, voters soundly rejected an expansion of the state’s renewable energy standard, and Colorado voters turned down an opportunity to reduce significantly the scale of fracking in the state. Nevada approved a measure to increase renewable deployment while Florida voted to ban offshore drilling.

The defeat of the Washington measure doesn’t mean that a carbon tax will disappear from the national discussion. Indeed, the failure plays into the narrative of supporters of a so-called revenue-neutral approach to putting a price on carbon. Such a measure, like the one Washington voters rejected in 2016, would give the funds raised with a carbon tax back to taxpayers. Crucially, supporters say, such a measure has bipartisan backing, support from industry and the endorsement of some, though not all, environmental groups.

“To make it politically viable, we need a plan that Republicans and Democrats, industry and environmentalists can all get behind,” says Ted Halstead, who heads the Climate Leadership Council, a bi-partisan group formed to push for what it calls a “carbon fee and dividend.” That measure, which has support from energy companies and some environmental groups, would give revenue raised by a carbon tax back to taxpayers.

And, with Democrats now controlling one house of Congress, some climate change advocates plan to redouble their lobbying push with the goal of advancing legislation — perhaps not next year but after the next presidential election. “We’re also wasting no time getting the ball rolling,” says Danny Richter, government affairs vice president at Citizens Climate Lobby, a group that advocates for a carbon tax.

Whatever the result, science suggests that resolution to the carbon pricing debate needs to happen sooner rather than later. An October report from the Intergovernmental Panel on Climate Change, the United Nations climate science body, found that the temperatures have already risen 1°C as a result of human activity and are set to rise another half a degree as soon as 2030 if we don’t change direction quickly. That level of temperature rise would drive a number of devastating impacts, from more frequent drought and heat waves to the potential disappearance of some island nations.

With that in mind, some groups are looking to advance carbon pricing wherever they can. Economists say that a price on carbon, if it is high enough, will reduce carbon dioxide emissions regardless of what happens to the revenue. “It’s critical to bring all voices into the room,” said Mo McBroom, director of government relations for The Nature Conservancy in Washington State, ahead of Tuesday’s election.

The Nature Conservancy supported the Washington state measure and continues to back the CLC’s carbon dividends plan even as other groups call it a giveaway to the fossil fuel industry.

“We need action on climate and we are agnostic” on what it looks like, she said. “There are many different ways to accomplish good carbon reduction policy.” 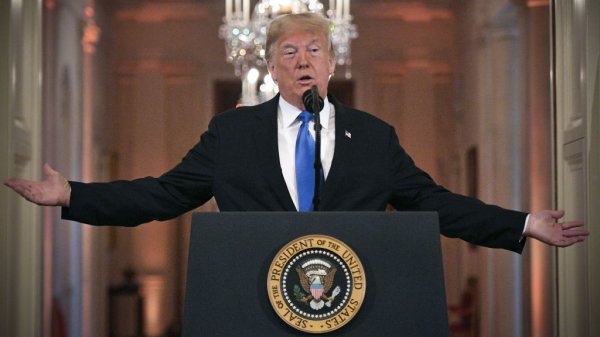 9 Lessons From the 2018 Midterm Elections
Next Up: Editor's Pick