Voting Itself Was on the Ballot Tuesday. Red and Blue States Went Different Ways

Voters in blue states supported ballot measures related to expanding access to the ballot, while voters in red states voted in favor of stricter rules.

In several states on Tuesday, voters were asked to weigh in on measures that could both expand and restrict ballot access — from voter ID laws in North Carolina and Arkansas to automatic and same-day voter registration in Nevada and Maryland. In Florida, voters opted to restore access for some convicted felons.

Going into Election Day, there were signs of growing concern about voting itself. The Georgia gubernatorial race brought voting rights issues to the forefront; in part because Democrat Stacey Abrams has made access to the ballot one of her core tenets, but also because her Republican opponent Brian Kemp, who also serves as secretary of state, has been accused of attempting to restrict minority access to the ballot.

Elsewhere, voter ID laws that have been upheld by courts in North Dakota and Arkansas have led many to worry that some minority votes will be suppressed. Same goes for a voter roll purge that was upheld by the Supreme Court in Ohio. According to the Brennan Center for Justice, nine states had restrictions in place that didn’t exist during the last election.

The full extent of the impact those changes have on the election are yet to be seen. But what we do know is how voters came down on ballot measures and amendments related to voting rights.

On Tuesday, voters in North Carolina voted in favor of amending the state constitution to include a requirement that voters present a photo ID when they cast an in-person ballot. The state legislature will convene later this month. During the session, lawmakers are expected to define what types of ID will be acceptable. The voter ID question was one of six ballot questions that North Carolina voters considered on Tuesday.

It has been a long road for voter ID laws in the Tar Heel state. A 2013 law that included voter ID, along with other provisions that made it harder for some residents to vote, was struck down by a federal court for targeting black voters with “almost surgical precision” in 2016. Republican lawmakers in the state say the voter ID requirements are necessary in order to prevent in-person voter fraud, despite the fact that in-person fraud is very rare. Voting rights advocates have argued that the law’s real intent is to suppress voter turnout among minority voters.

Like North Carolina, Arkansas has also faced trouble in its efforts to enact a voter ID requirement. In 2014, the state’s Supreme Court ruled that a law requiring voters to present an ID at the polls was unconstitutional. Yet in 2017, the state legislature enacted another voter ID law that was in effect for the 2018 midterm election, despite facing some legal challenges. Those without ID are allowed to cast provisional ballots in the state.

But the voter ID battle reached a pivotal breaking point on Tuesday, when voters decided to amend the state’s constitution to include a requirement that voters present a voter ID at the polls succeeded. Under the amendment, the state would be required to provide free IDs to voters without them.

Nevada joins the 13 others and D.C. that have implemented automatic voter registration as of Tuesday. Under the initiative, known as Nevada Question 5, eligible citizens will be automatically registered to vote when they apply to receive or renew a license or change their address via the state’s Department of Motor Vehicles. Support for the initiative has largely fallen along party lines — when Republican Gov. Brian Sandoval vetoed the measure, forcing a public vote, he said that auto-registration “extinguishes a fundamental, individual choice.”

“The core freedom of deciding whether one wishes to initiate voter registration belongs to the individual, not the government,” he said at the time.

Michigan voters came out in favor of an amendment that adds eight voting provisions to the state constitution. The changes include same-day voter registration, straight-party ticket voting, allows for the automatic registration of eligible voters and no-excuse absentee voting, among other things.

Maryland will join 16 states and D.C. in allowing voters to register to vote and immediately cast ballots on Election Day. A ballot question before Maryland voters asked voters if they support or oppose such a measure. Voters in the state could already register to vote until the end of the early voting period, but this ballot measure amends the state constitution in order to allow voter registration through Election Day.

Over 1 million Floridians could have their voting rights restored in Florida where voters approved the state’s Amendment 4. A disproportionate number of African American and Democratic voters could be impacted by the restoration, according to a Tampa Bay Times/Miami Herald analysis.

Under the proposed amendment, convicted felons would be eligible to vote upon the completion of their sentence. Those convicted of murder and felony sex crimes, however, would not be eligible to vote. High profile groups on both sides of the political spectrum — from the American Civil Liberties Union to the Koch-backed Freedom Partners—and celebrities including John Legend and Rihanna came out in support of the amendment. 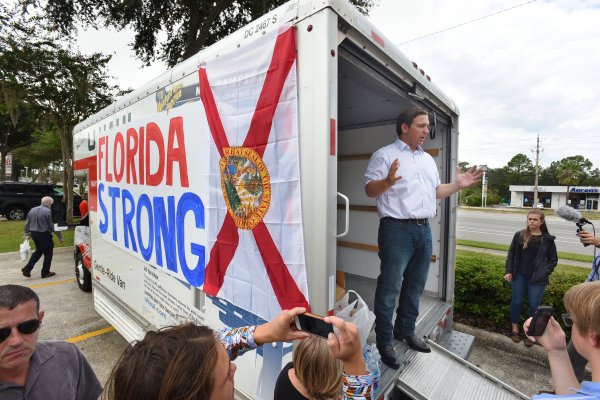 Ron DeSantis Won Florida by Tying Himself to Trump
Next Up: Editor's Pick