Jamal Khashoggi's Sons Plead For His Body To Be Returned: 'We Just Need to Make Sure He Rests in Peace'

The sons of the murdered Saudi journalist Jamal Khashoggi have requested Saudi Arabia return his body, in an emotional interview with CNN on Sunday in which they spoke of their “courageous, generous and very brave” father.

Khashoggi, who had been critical of the Saudi regime, was killed shortly after entering the Saudi consulate in Istanbul on Oct. 2. On Monday, Turkey’s vice president said Khashoggi’s remains may have been dissolved in acid.

“All what we want right now is to bury him in Al-Baqi [cemetery] in Medina with the rest of his family,” Salah Khashoggi, 35, said. “I talked about that with the Saudi authorities and I just hope that it happens soon.”

“It’s a basic humanitarian issue,” he said. “We just need to make sure he rests in peace.”

Salah was accompanied by his brother, Abdullah, 33. The pair were composed yet visibly emotional, speaking softly. “I really hope that whatever happened wasn’t painful for him, or it was quick. Or he had a peaceful death,” said Abdullah.

“Jamal was a moderate person. He was liked by everybody. He had differences and common values with everyone,” Salah said. “I see a lot of people coming out right now and trying to claim his legacy and unfortunately some of them are using that in a political way that we totally don’t agree with.”

“Public opinion is important,” he continued, “but my fear is that it’s being over politicized. People are throwing analysis that may direct us away from the truth.”

The pair echoed Khashoggi’s own assertion that though he was critical of the Saudi monarchy under Mohammed bin Salman, the Crown Prince, he never liked being called a “dissident.”

Salah also said that the media had been their source for learning of the many developments of their father’s murder. Khashoggi was at first considered disappeared, with Saudi officials claiming he had left the consulate. Reported details of his murder and the dismemberment of his body leaked through Turkish media until Saudi Arabia recognized he had been murdered in the consulate on Oct. 19.

Mohammed bin Salman broke a three-week silence on the Khashoggi case on Oct. 25, calling his death a “heinous crime that cannot be justified.” That remark was made at a Saudi investment conference, which many foreign delegates had boycotted because of the controversy over Saudi leadership’s alleged involvement.

Searches for the body have yielded no results so far, though traces of chemicals have been found in the consulate, as well as evidence of the repainting of walls.

“It’s difficult, it’s not easy. Especially when the story gets this big. It’s not easy, it’s confusing. Even the way we grieve, it’s a bit confusing,” Abdullah said. “At the same time, we’re looking at the media and the misinformation. There’s a lot of ups and downs. We’re trying to be emotional and at the same time we’re trying to get the story — bits and pieces of the story to complete the whole picture. It’s confusing and difficult. It’s not a normal situation and not a normal death.”

Salah said that, despite the apparent complicity of the Saudi state in his father’s murder, he still had faith the perpetrators would be brought to justice. “The King has stressed that everybody involved will be brought to justice. And I have faith in that. This will happen. Otherwise Saudi wouldn’t have started an internal investigation.” 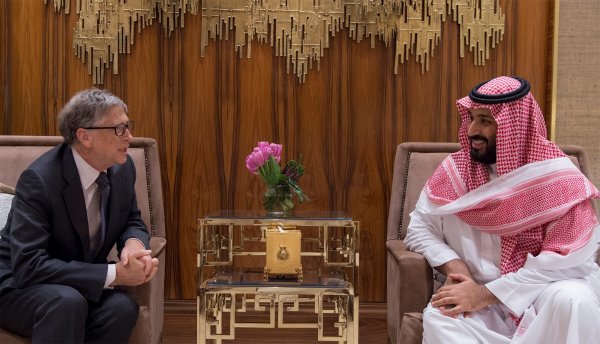