Jonathan Lethem is a big fan of Raymond Chandler’s, so it’s not by chance that his new novel, The Feral Detective, begins where Chandler’s The Big Sleep leaves off, about 40 miles east of Los Angeles, on the section of old Route 66 called Foothill Boulevard. It no longer looks like it did when Philip Marlowe flirted with death outside a shady garage in the rain. But Lethem found himself called back to what he calls “the cradle of my prose” when he wrote the introduction to a wonderful recent volume, The Annotated Big Sleep. “How I learned to write sentences was in that sardonic, disappointed, romantic, first-person, hard-boiled voice,” he says.

It’s the same voice that narrates Lethem’s 11th novel, a return to the genre that animated his first books and the 1999 breakout Motherless Brooklyn, though he’s not known for being predictable. His 2005 MacArthur Fellowship cited “narratives that explore the relationship between high art and popular culture.” He recently reworked Allen Ginsburg’s Howl in the language of Charles Schulz’s Peanuts.

The Feral Detective begins, as detective stories so often do, with an attractive woman bringing a missing-persons case into the shabby office of a private eye. The (quite winning) conceit of the novel is that the client, not the detective, is its protagonist: Phoebe Siegler is the jaded one here, wisecracking while trying to remain true to her personal code in a mixed-up world. The detective, Charles Heist, is a cipher with an ailing possum in his desk drawer and a child seeking refuge in his closet. Heist proves handy as a romantic interest, as well as for his deep knowledge of the Mojave Desert subcultures into which the missing girl has disappeared–a utopian community that devolved into warring tribes, women against men.

That’s the plot. The mystery: How bad can things get? It’s the question Lethem found himself entertaining after the 2016 election, which kicks off the book. He had assumed a detective novel about gender roles would be “a really good book to write during the Hillary Clinton Administration.” Upon reflection, he recognized the enveloping darkness–his view of the Trump era–as noir.

“What happens to the impulse to preserve a masculine reality?” Lethem asks. He wanted to interrogate, in the book as in the world, the shape that male identity takes when it loses dominance. What he found was not encouraging. “It didn’t turn out to be a Robert Bly drumming circle. It turned into Pepe the Frog and all this horrible, horrible online sh-t.”

Lethem has observed that the rhythms of detective fiction are set as firmly as those of the sonnet. His first book, Gun, With Occasional Music, riffed on Chandler too, and Motherless Brooklyn featured a detective with Tourette’s syndrome in the New York City borough where Lethem was himself raised in a commune, albeit the brownstone kind, with a political-activist mother and an avant-garde painter dad. That milieu informed 2013’s Dissident Gardens, a reflection on American leftism.

“Actually, if you look at Heist,” Lethem says of his new detective character, “he is me. He’s the oldest you can be and still be hippie-raised.” A Californian now, Lethem teaches at Pomona College, itself “a stone’s throw” from Foothill Boulevard. He savors the settings that have inspired not only him but also fellow hard-boiled crime-fiction writers like Ross Macdonald, who conjures, he says, “really accurate descriptions of the strangeness of the civilization that’s been kind of laid like a veneer over this desert.”

Lethem calls the Mojave “fabulous” and “desolate,” but says you don’t come out of it with any illusions. The client in The Feral Detective certainly doesn’t. “What Phoebe uncovers for herself–to the extent that there’s political implication in it–is that the more things change, the harder they are to change back,” he says. He sees that in the sobering landscape of 2018 as he looks ahead to the midterm elections, which fall on the same day The Feral Detective will be released. Like Phoebe, we’ll have to work through the mess we’re in. Or, as Lethem puts it: “We’re not going to just vote our way out of it.” 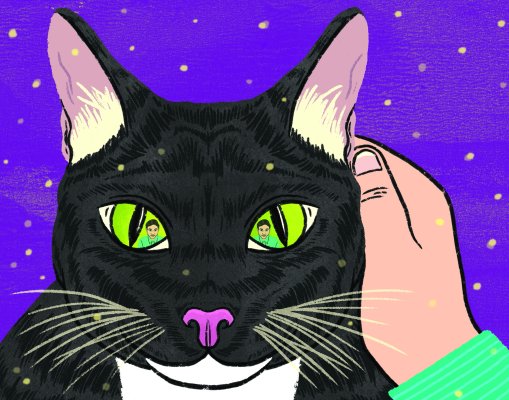 Read This If You Love Cats
Next Up: Editor's Pick