The Migrant Caravan as Political Bandwagon

Honduran migrants, part of a caravan to the U.S., resume their march in Oaxaca State, Mexico, on Oct. 29
Guillermo Arias—AFP/Getty Images
By Ioan Grillo/Huehuetán, Mexico

A thousand miles south of the Rio Grande, Lesly Xiomara Chirinos plodded along a Mexican road comforting her year-old son Murphy, her partner holding up an umbrella to shield them from the punishing sun. On Oct. 13, they abandoned their home in the Honduran city of La Ceiba to join several thousand people on the so-called migrant caravan heading north. Since then, they have been marching for long hours, jumping on pickup trucks, sleeping in parks, living on handouts of food.

Chirinos, 31, says she fled because of death threats by gang members trying to shake down the family grocery store. In Honduras, extortion is often backed up by murder. “They wait in front of the shop with big guns, and we are scared to go out,” she says. “The military police are outside, and they don’t do anything.” Their hope now is to get asylum in the U.S., where they would be protected from the gangs and be able to work to support the rest of their family.

On the other side of the border, politics awaits. The caravan of migrants and asylum seekers has become a virtual obsession of U.S. President Donald Trump, who has railed against it in tweets and at rallies over the past two weeks. He has claimed that it has been infiltrated by gang members, that dangerous people from the Middle East are traveling with it or that the Democrats are behind it–all without evidence. Trump may see the caravan as a potent political issue ahead of the midterm elections, with an Oct. 18 poll showing that 55% of voters believe immigration is a very important issue. He also claimed on Oct. 29 that he plans to end birthright citizenship by Executive Order, a move many lawyers believe would be unconstitutional.

In addition to all the words, the Trump Administration is making real attempts to keep the caravan out. Trump has said he’s willing to send as many as 15,000 troops to the U.S. border ahead of its potential arrival. Homeland Security Secretary Kirstjen Nielsen offered a message to its members on Oct. 28. “Do not come,” she said on Fox News. “You will not be allowed in.”

The first whispers of the caravan came in early October, when migrant activists in Honduras began passing around messages on social media to mass at the bus station in the city of San Pedro Sula. Strength in numbers helps protect migrants from Mexican cartels that kidnap them and federal police who detain and deport them.

Initially, just a few hundred people turned up, but when local TV stations reported the gathering live, it rapidly grew into thousands. Many in the caravan describe seeing the coverage and deciding to immediately pack their bags and join. “People reacted to it because they are at breaking point,” said Honduran TV reporter Orlin Castro. “This is the worst moment ever for my country.”

Although the murder rate there has dropped from record peaks in recent years, Honduras remains plagued by sky-high crime rates and widespread poverty. President Juan Orlando Hernández was sworn in for a second term in January after an election marred by allegations of fraud, setting off violence that left dozens dead. “It’s clear people are running from a failed state,” said Adam Isacson of the Washington Office on Latin America.

Even before the caravan, Honduras had been a top source country for asylum seekers to the U.S., alongside Venezuela, El Salvador and Guatemala. However, U.S. courts have long been hard on Honduran applicants, with 78% of them rejected from 2012 to 2017. And in June, Attorney General Jeff Sessions directed judges to toughen the criteria, which could push the rejection rate even higher. “Donald Trump doesn’t see them like human beings,” said Irineo Mujica of the migrant support group Pueblo Sin Fronteras, which is helping the caravan. “He sees them like animals.”

The Trump Administration’s tough stance hasn’t stopped people from attempting to come to the U.S., though. At its peak the original caravan swelled to more than 7,000 people, while a second large group also made it to Mexico’s southern border. On Oct. 28, Mexican federal police blocked the entrance bridge, leading to a confrontation in which a Honduran was killed, allegedly by a rubber bullet. But about 1,000 still made it over the river and could eventually catch up with the first group. Trump has vowed to put in tent cities any marchers who make it to the U.S. border.

Yet many on the march tell TIME they actually intend to stay in Mexico. Some 1,700 people who came in with the caravan have already applied for asylum here, and more could file from Mexico City, where the remaining 4,000 to 5,000 marchers plan to rest and debate their onward journey.

Josue Martinez, a 24-year-old law student from San Pedro Sula, says he plans to stay in Tijuana, where he has family. He is helping his younger brother flee, after a gang tried to forcibly recruit him. One thing he is certain of is that he won’t turn back. “There has been killing of students and innocent civilians … The control by the gangs has grown,” he said. “There is a terror, a fear, in Honduras.”

— With reporting by Maya Rhodan/Washington 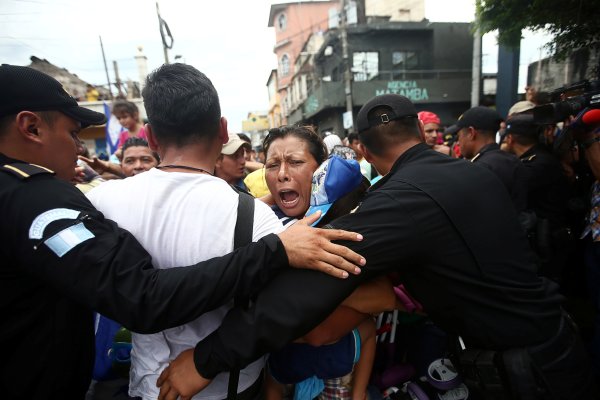 'We Won't Be Broken.' Migrant Caravan Sets Sights on U.S.
Next Up: Editor's Pick