How Green Is Your City? In Paris, the Answer Is Not Green Enough

People enjoy the warm weather and the sun below the Eiffel Tower on the Champ-de-Mars park on April 18, 2018 in Paris.
Alain Jocard—AFP/Getty Images
By Precious Adesina

At the top of the Eiffel Tower on a summer’s day, there’s a perfect view of the Champ de Mars, one of France’s most popular parks. For miles across the city, trees appear to fill the streets.

But the view might be deceiving. According to a new algorithm measuring the percentage of urban trees seen from a pedestrian’s perspective, Paris ranks poorly. The algorithm, known as Treepedia, was launched in 2016 by Senseable Cities Laboratory, a research group in MIT’s Department of Urban Studies and Planning, in collaboration with the World Economic Forum. It uses footage from Google Street View to evaluate and compare green canopy cover; the median generated is known as the Green View Index. Among the highest of the 27 cities currently measured are Tampa (36.1%), Singapore (29.3%) and Oslo (28.8%)

Paris, with a score of just 8.8%, is on the other end of the scale — unfairly, according to the city’s deputy mayor Penelope Komites. She says the project does not best represent the city because Google Street View rarely covers parks. “It doesn’t take into account the trees in the green spaces or in the woods, which are very important to Paris,” Komites says.

Yet even when taking into account parkland like the Bois de Vincennes, Paris scores low in terms of greenery. According to data from the World Cities Culture Forum, a network of local governments and cultural sector leaders, only 9.5% of Paris is made up of this kind of green space, compared to Vienna at 45.5% and Oslo at 68%. In the U.S., over one fourth of New York is allocated to parks. In San Francisco, the figure is 13%.

Increasing a city’s green coverage can not only lower urban temperatures, it can also be “extraordinary in terms of collective well-being,” says Carlo Ratti, the director of MIT Senseable City Lab. According to a study in April of around 95,000 people with mental health issues in cities, carried out by the universities of Oxford and Hong Kong, exposure to nature can reduce the chance of serious depressive disorders by 4%.

The idea of bringing trees into cities is a fairly modern one. That means older cities like Paris tend to naturally have less canopy than newer ones. “Even some affluent areas don’t have a good green coverage as they were built in older times with narrower streets and sidewalks,” Ratti explains. An exception in Paris are the large green boulevards scattered across the city, such as Boulevard Saint-Germain on the Left Bank of the River Seine, which Baron Haussmann designed in the 19th century. “But they are not the rule,” Ratti adds.

Meanwhile cities like Seattle, Miami and Sacramento, each founded in the second half of the 19th century, have a Green View Index of around 20%, more than double that of Paris.

The Parisian government is making an effort to boost greenery by planting 20,000 new trees in the city by 2020 — an objective that the Mayor decided on when she was elected in 2014, Komites says. The initiative includes creating green spaces in 800 schools in Paris by 2040. Large-scale projects are also on the horizon with Italian architect Stefano Boeri designing a predominately wooden skyscraper to be built in Villiers-sur-Marne, in the eastern suburbs of Paris. It’s part of a wider project known as “Balcon sur Paris,” which includes 12 tree-covered developments.

Boeri, who completed two towers with tree-covered balconies in Milan in 2014, believes urban forestation is the answer to climate change. The architect argues that “vertical ecosystems” allow for more concentrated biodiversity than trees on streets and has more environmental benefits. He hopes the idea of a “vertical forest” will take off worldwide.

Although Paris is making efforts to transform the city, it still has some way to go. But Kobe in Japan and Quito in Ecuador were not far off Paris’s result with Green View Indices of 9.4% and 10.8% respectively and this tool may help flag issues regarding greenery in cities worldwide. MIT eventually hopes to provide information regarding the different types of trees present too.

According to Alice Charles, the lead for all urban development work at the World Economic Forum, changes are on the way. While at a U.N. Conference in October, she noticed “cities have started to think about the value of their trees,” she says. With 60% of the world’s population expected to live in cities by 2030, greenery in these places is increasingly being seen as an important issue for the wellbeing of citizens. And perhaps not long from now, Parisians will feel the impact walking the city’s streets as well as looking from the tallest towers. 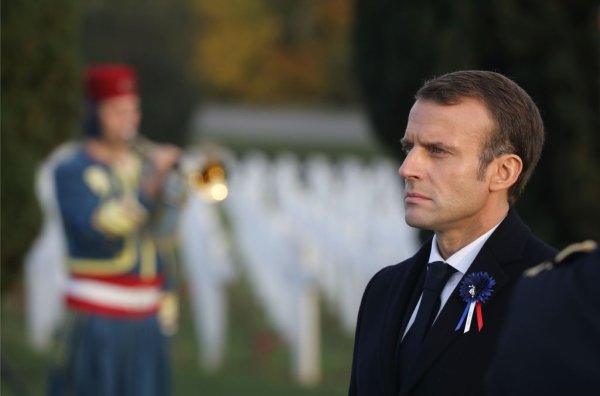 France's Macron Calls for 'European Army'
Next Up: Editor's Pick