Following Meghan Markle’s debut as part of the British Royal Family, there’s been plenty of discussion around the “Meghan Markle Effect” — that is, the bankability and sustained interest in the Duchess of Sussex’s fashion statements, the power of which was estimated to give the British economy a boost.

While it’s nothing new that royals are looked to as trend setters, Markle is cutting a different kind of fashionable figure from Buckingham Palace.

Since becoming a royal, Markle has demonstrated a keen understanding of how her fashion choices carry significance. Markle’s fashion diplomacy so far has been deft; she’s conscientious in supporting British designers, but also uses her wardrobe choices to pay homage to countries she visits, like Michelle Obama was known for during her time in the White House.

She mixes in affordable pieces from lines like ASOS and & Other Stories with designer labels. And as a self-proclaimed feminist, she often selects female-helmed brands and design houses — most notably, tapping British-born designer Clare Waight-Keller to create her highly anticipated Givenchy wedding gown for her nuptials to Prince Harry this spring.

During her first royal tour as the Duchess of Sussex, Markle used her wardrobe to advocate for a cause that she’s made the case for before: sustainability. While Markle has made headlines for wearing green fashion in the past, the Duchess made a concentrated effort during the royal tour to sport clothing that was made ethically and sustainably.

During her tour of four Commonwealth countries, where she and Prince Harry focused their attention on environmental and conservation efforts, Markle was photographed wearing multiple sustainable fashion labels. Chief among them, there were Rothy black flats, which are made from 100% post-consumer water bottles; Outland denim, organic cotton jeans crafted by seamstresses being paid a living wage; Veja fair trade sneakers constructed out of wild rubber and organic cotton; and a linen Reformation sundress that was created with 11.9 lbs less carbon dioxide than a conventional design, according to the company’s website.

Yael Aflalo, founder and CEO of Reformation, whose sundress sold out soon after Markle was spotted wearing it, says people don’t realize how much what they wear can affect the environment.

“For the average consumer, the impact of fashion on the environment feels abstract and not part of our day-to-day life,” she said, adding that choosing eco-conscious styles is “a small change that adds up to make a big difference.”

In this way, Markle’s sartorial advocacy is more than just a style statement made in goodwill. Outland, the brand that created the pair of jeans that Markle wore at least six times during the royal tour, told People that their sales increased 640% within 48 hours of the Duchess wearing the design.

Stylist and brand consultant Rachael Wang believes the Duchess’ wardrobe choices are a thoughtful way of calling attention to what needs to change.

“Fashion from ‘fast’ all the way up to ‘luxury’ has generally ignored the truths that production mindlessly gobbles up precious natural resources, pollutes water, soil and air and takes advantage of laborers,” Wang said. “Not to mention, the trend cycle which promotes consumers to buy more than they will ever have time to wear before the the next trend emerges so that it all ends up in the landfill…I think these conversations are extremely urgent and I’m grateful that Meghan is using her platform to promote brands that are trying to change the irresponsible ways that the fashion industry has always done business.”

Markle’s sustainable fashion choices weren’t just in the labels that she selected, but also in the way that she wore her looks. During the royal tour, Markle chose a navy blue Stella McCartney cape-front dress to the opening ceremony of the Invictus Games in Sydney that she had previously worn to a London concert for the Queen’s birthday. Stella McCartney, who designed Markle’s wedding reception dress, is known for her deep commitment to her design being both eco-friendly and cruelty-free. Markle’s outfit repeat is something that all consumers, royal or not, can easily do.

Those who want to practice sustainability with what they wear can do it with simple choices — no purchase required. Wang advises that consumers repair their clothes as opposed to buying new ones when they wear out and advocates for buying secondhand items, which keeps clothing and accessories out of landfills. She also suggests focusing your closet on your personal style, not a fleeting trend.

“A wardrobe full of feel good staples like this will last a lifetime,” she said. “Then you can sprinkle in a few seasonal additions from brands whose ethos really resonate with your values.”

Céline Semaan, founder and creative director of Slow Factory, a fashion and tech lab centered around environmental and human rights activism, points out that truly sustainable fashion is less about what you buy, but how you live your life.

“Sustainable fashion is a culture — it’s more than a one-off purchase or decision,” Semaan said. 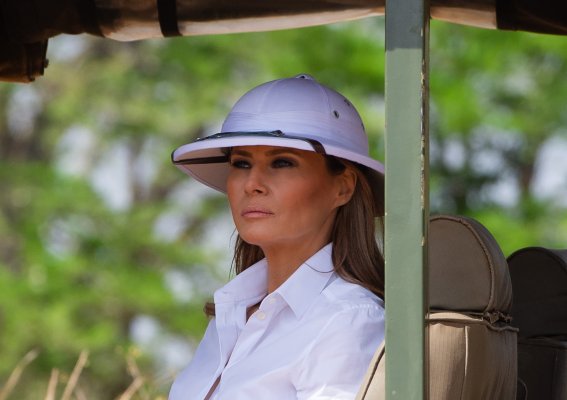 Melania Trump Says We Should Stop Critiquing Her Fashion Choices. Here's Why It Keeps Happening
Next Up: Editor's Pick