A man takes a moment at each of the Star of David memorials with the names of the 11 people who were killed at the Tree of Life synagogue two days after a mass shooting in Pittsburgh, Pennsylvania, on Oct. 29, 2018.
JARED WICKERHAM—EPA-EFE/REX/Shutterstock
Ideas
By Deborah Lipstadt
Deborah E. Lipstadt is Dorot Professor of Holocaust Studies at Emory University and the author of the forthcoming Antisemitism Here and Now.

I was at a resort outside of Phoenix preparing for an uncharacteristically – for me that is – relaxing day. Armed with a stack of books (admittedly, most of them dealt with the Holocaust), I had planned a day sitting by one of the pools reading. Some would call it a busman’s holiday, but I anticipated it with pleasure.

As I crossed the grounds, a woman who had heard me speak about contemporary antisemitism the previous night, approached: “Your words were prescient.” Sensing my confusion, she added: “The shooting. Pittsburgh. The synagogue.” I immediately turned to CNN and learned of the unfolding tragedy.

As we now know, 11 Jews at Tree of Life synagogue were gunned down. Some were probably there for spiritual reasons: to worship God, hear words of Torah, and pray for the sick. Others were there for fellowship: to see fellow Jews and catch up on the week’s events. (A Jewish pundit once said: My neighbor Jacob goes to synagogue to talk to God. I, a non-believer, go to talk to Jacob.)

Those Jews, the “regulars” as they are called in synagogue parlance, were the victims. Some were gunned down at the entrance as they donned their prayer shawls and prepared to enter the sanctuary. Others were killed inside what that morning would be, anything but, a sanctuary.

Among the victims were many elderly. For who gets to synagogue on time? Those without kids to dress and meal tables to set. Those who, living alone, consider the synagogue their “club.” They also know that a minyan, a prayer quorum, which in this Conservative synagogue is ten adult Jews, is necessary to say the Kaddish, the prayer for the dead. Having reached their eighth or ninth decade, they have needed that quorum in the past – for parents, siblings, and, even children. They come early to enable other Jews to mourn their losses.

And today they are the ones we mourn.

There is an irony about this tragedy. Now is, arguably, a golden age for American Jews. Universities, that once had quotas for Jewish students, have presidents who are Jews. Resorts, that once forbade Jews from coming there, host Passover retreats. Law firms, that once rejected Jewish applicants out of hand, now ensure that kosher food is available at partners’ meetings because attendees need it. Structural antisemitism, the kind of antisemitism practiced by governments and institutions, is at an unprecedented low.

But that is only half the story. Acts of antisemitism have increased exponentially in recent years. The ADL cites a 50% increase in antisemitic acts in the past few years. American Jews have expressed heightened concerns about this. Yet they may have a myopic view of the problem. They see only half the picture. Many American Jews worry about antisemitism that comes from the political left. They see those on the left vilifying Israel in a fashion that is applied to no other country. Sometimes, they see Jews denied something denied to no other people, a national identity.

But the organized community has not shown the same concerns about antisemitism on the right. In recent decades there has been a rise in white nationalist and supremacist groups. We began to witness this uptick during the Obama administration, possibly as a right-wing response to having a person of African American heritage as president. These groups emerged with newfound strength during the 2016 presidential campaign and during the first years of the Trump administration. They now feel they have gained a certain legitimacy in the eyes of governmental leaders. I do not mean to suggest that the administration is explicitly saying their nationalism and white supremacy is acceptable. The suggestions are far from explicit, e.g. there were “very fine people on both sides” in Charlottesville. Their vision of America is one that is white and Christian. And Jews should not deceive themselves for a moment. In these folks eyes Jews are neither.

The vast majority of these antisemites, however vile their ideas, would never commit violence. However, there are the extremists. For these deranged hate-laden folks, their leaders’ divisive rhetoric becomes verbal ammunition that inspires them to build pipe bombs or take an AR-15 into a synagogue.

If the murder of 11 innocent people can teach us anything, what lessons might we learn?

In Jewish tradition, upon mourning the dead, we say: May their memory be for a blessing. Today, we should say may the memory of all those killed and the suffering of those who have been wounded be for a blessing and for a lesson, a lesson we ignore at our personal, national, and moral risk. 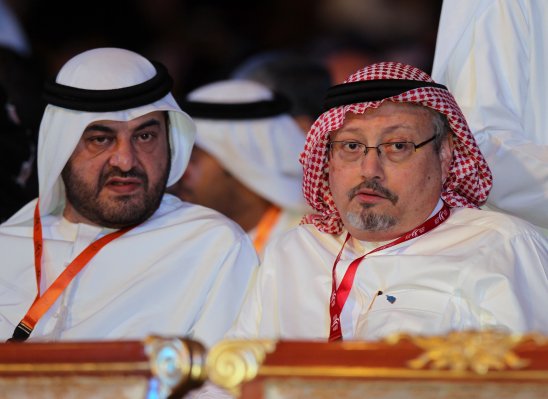 I’m a Young Saudi Journalist. Jamal Khashoggi’s Disappearance Will Not Silence Us
Next Up: Editor's Pick