A North Carolina High School Did Not Dismiss Class After a Student Was Fatally Shot on Campus. Here's Why

Students and staff at Butler High School in Matthews, North Carolina faced gut-wrenching tragedy Monday morning when a student shot and killed a classmate during a fight in a crowded hallway as students were entering the school for the day.

The incident prompted pandemonium within the school community, according to the Associated Press and other outlets, as the school was placed into lockdown for about two hours and many terrified parents rushed toward the school to make sure their children were safe.

After the lockdown was lifted, the Charlotte-Mecklenburg Schools posted on social media that parents were officially allowed to pick up their children at the entrance to the high school, but added that “classes will proceed on campus today for students remaining on campus.”

The decision to continue with classes after a fatal shooting was met with skepticism by many on social media, with some wondering if a fatal school shooting had become so “normalized” that the incident didn’t even prompt a school closing.

But Tracy O. Russ, the chief communications officer for Charlotte-Mecklenburg Schools, told TIME that the decision to keep the school open was made to provide students with a safe place to stay until their families could come get them.

“Our goal was to ensure that students could remain on campus and safe until such time that transportation arrangements could be made by families,” Russ said in an email.

Neither the suspect nor the victim’s names or ages were immediately released, but Matthews Police Department Capt. Stason Tyrrell confirmed the victim died in the hospital, and the suspect was quickly taken into custody by a school resource officer as others rushed to the scene.

Tyrrell also told reporters that authorities viewed surveillance video of the fight, and described it as an “isolated incident” between two students. 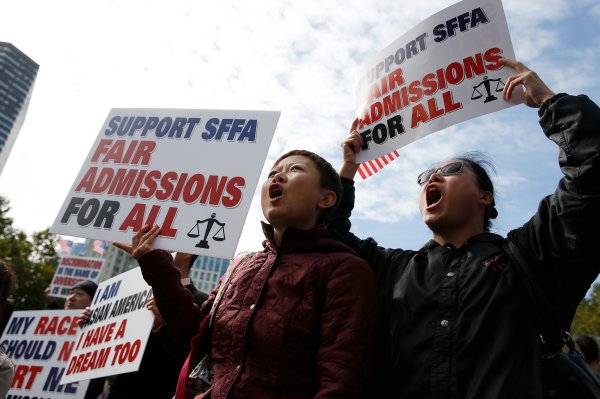 A Lawsuit by Asian-American Students Against Harvard Could End Affirmative Action as We Know It
Next Up: Editor's Pick