'We May Have to Self-Exile.' Brazil Rejoices and Trembles at Bolsonaro Victory

It was 7.22pm on Oct. 28 when Brazil erupted like it had won the World Cup. On Copacabana beach, on Avenida Paulista, in squares and street bars across cities and savannas, euphoria blended with antagonism to produce tears, chants and blasting horns.

Fifty-seven million Brazilians had voted for Jair Bolsonaro, the former army captain who lionizes the torture and murder of that regime and built a political career on hateful rhetoric against women and minorities, to become president of the largest nation in Latin America.

Outside his beach condo in a rich enclave of Rio de Janeiro, the national anthem played, and yellow-and-green clad supporters embraced. The 63-year-old former army captain won 55 percent of votes by rallying against corruption, crime and the media amid an economic crisis.

But today, as Brazil awoke to the reality of its first far-right president since two decades of military dictatorship ended in 1985, many felt only uncertainty.

In a break from tradition, his socialist opponent Fernando Haddad – who polled 45 percent – did not call to congratulate him. A week before, Bolsonaro had promised a “a cleansing never before seen in the history of Brazil” in which “red fringes” would face exile or jail.

In contradictory fashion, Bolsonaro last night promised to be “a defender of the constitution, democracy and freedom” when he takes office on 1 January. It came a week after it emerged his son had threatened to send “a soldier and a corporal” to close the Supreme Court.

But suggestions of “a coup, shutting down congress and summoning tanks” – all of which Bolsonaro advocated earlier in his career – are exaggerated, Jairo Nicolau, a political scientist at the Federal University of Rio de Janeiro, tells TIME. “He does not need to do that. He has a majority in congress and popular support. Instead, there will be high tensions.”

“The biggest risk is the exhaustion of the democratic order, pitting the people against the institutions and wearing out the relations between citizens with different viewpoints,” Nicolau adds. “But we have strong institutions with strong communications, an active civil society and a military that is neutral and distant from politics. This is not a banana republic.”

Nonetheless, Bolsonaro’s win could have global implications – he has threatened to withdraw Brazil from the Paris Agreement on global warming (though walked it back on the campaign trail) and allow widespread exploitation of the Amazon rainforest. He also plans extensive privatizations and economic reforms.

With Bolsonaro planning to relax gun laws and give police freedom to kill, an increase in Brazil’s annual homicide toll of 63,880 is likely, say security analysts. “These measures are a recipe for the explosion of violence” where police open fire when they see a criminal, says Sílvia Ramos of the Center for Security and Citizenship Studies. Last year, Brazil’s police were recorded as killing 5,144 people. “Only someone who is in despair would think that introducing more guns, more police brutality and more incarceration will lead to a reduction in criminality in Brazil,” she added.

Bolsonaro’s election lifted others in his party to positions of power, including Wilson Witzel as governor of Rio de Janeiro. When asked where he would put all the criminals he intended to arrest, Witzel responded that he would “dig more graves.”

“The elite in Brazil has always believed the police are for young black criminals from favelas,” Ramos adds. “For them, anything goes. They want a more violent police force.”

The election of Bolsonaro has also led to trepidation among many minorities and campaigners whom he has stigmatized in the past – from members of the gay community to those who campaign for environmental protections and for justice for the abuses of Brazil’s dictatorship.

At least 387 LGBT Brazilians were murdered because of homophobia in 2017, according to one campaign group, which put a 30 percent increase down to the rise of ultraconservative politicians. Bolsonaro’s rhetoric – including equating homosexuality with pedophilia in an interview with TIME and saying he would rather his son died than be gay – has not reassured the LGBT community.

“We are looking at ways of getting stronger, looking at tactics from the ’80s and ’90s. We have to rebuild a lot of things that we had in the past, before progress was made,” says Julio Moreira of Grupo Arco-íris, a national LGBT association. “We may have to self-exile in order to reconstruct the country later. It is more important to survive and guarantee our rights later down the line.”

But Bolsonaro’s supporters, many young and from Brazil’s major cities, welcomed his election as a victory for the people. “Whoever didn’t win the elections, didn’t listen to the streets,” said Charlo Ferreson, a young Bolsonaro campaigner. “The other parties thought that they had a monopoly and would get what they wanted. How many life-long politicians weren’t elected? This is the result of our work.”

— With reporting by Shanna Hanbury 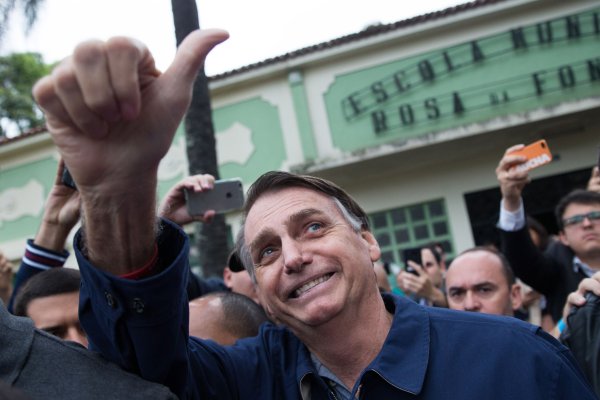