Border Patrol Has No Intention 'Right Now' to Shoot at Caravan Migrants If They Approach U.S. Border

OCT 22: Honduran migrants take part in a new caravan heading to the US with Honduran and Guatemalan national flags in Quezaltepeque, Chiquimula, Guatemala
ORLANDO ESTRADA—AFP/Getty Images
By Billy Perrigo

Homeland Security Secretary Kirstjen Nielsen said Thursday the U.S. government will not open fire on a migrant caravan currently heading north through Mexico, after news emerged that the Trump Administration was planning to send at least 800 troops to the southern border.

“We do not have any intention right now to shoot at people,” Nielsen told Fox News. “They will be apprehended, however.”

The caravan of some 7,000 people, which Trump has described as a “national emergency,” was near Mapastepec in southern Mexico on Thursday – approximately 1,000 miles away from the U.S. border.

Moving mostly on foot at a rate of roughly 30 miles per day, the caravan could take months to reach the U.S. unless buses or other forms of transport are provided.

“If they come here illegally with no legitimate reason to stay, they absolutely will be apprehended and removed immediately,” Nielsen said. “Everything is on the table,” she added.

Nielsen suggested that border officers would be armed, however, and able to shoot if they felt threatened. “I also take my officer and agents, their own personal safety, extraordinarily seriously,” she said. “They do have the ability of course to defend themselves.”

The Mexican government estimates that the caravan is formed of roughly 3,600 people, around half the U.N.’s estimate of over 7,000.

On Friday, NBC reported the Trump Administration was drafting an executive order that would make it difficult for migrants from Central America to gain asylum in the U.S.

Trump addressed migrants in the caravan directly through Twitter on Thursday. “Go back to your Country,” he wrote, “and if you want, apply for citizenship like millions of others are doing!” 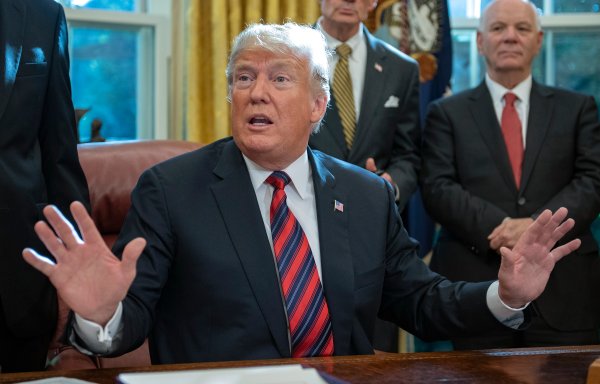 Trump Admits Having 'No Proof' Terrorists in Migrant Caravan
Next Up: Editor's Pick