Why Michael Avenatti Thinks Only a White Man Can Beat Trump

Michael Avenatti, the lawyer and possible presidential candidate, caused a stir with his contention that there’s only one type of candidate who can beat President Trump. In an interview with TIME published Thursday, Avenatti said the Democrats’ 2020 nominee “better be a white male,” because society affords more credibility to white men than it does others.

Though the statement has struck many as inflammatory, it represents a real, if usually private, debate within the Democratic Party—one that is likely to recur as the next presidential election approaches. Avenatti, who once worked as a researcher on political campaigns, clarified his position on Thursday:

Read More: Michael Avenatti’s Past Won’t Stop Him From Running in 2020

Here’s what Avenatti told TIME in an interview on June 25 in New York City, before he began publicly considering a presidential run:

In a separate interview the same day, Avenatti said the disproportionate authority society grants to white men is also a part of his success as an advocate:

In a subsequent interview, Avenatti made the same point in response to a question about whether he might himself run for office:

Democrats have responded to the Trump presidency by nominating a record number of women and minority candidates for the upcoming midterms. Many of the party’s prospective 2020 candidates are also women or people of color, and black women in particular are the party’s most reliable voters. But even if they don’t put it in Avenatti’s stark terms, many in the party argue that the path to victory lies not in galvanizing reliably Democratic demographics, but in finding a way to appeal to swing-voting whites. It’s those voters—non-college-educated whites in states like Ohio, Pennsylvania and Wisconsin — that swung to Trump and put him over the top in 2016.

Whether openly or in code, the 2020 Democrats will have to address a version of Avenatti’s sentiment, which is also on the minds of the party rank and file. Indeed, in interviews with a dozen attendees at the New Hampshire Democratic picnic where Avenatti spoke, the issue came up more than once. “I don’t think we should be trying to elect a woman, a black person or a Hispanic,” said Nancy Walton-Hamm, a white 68-year-old retired computer programmer. “Too many old white guys won’t support that. I’d be willing to wait another generation” for a woman president.

As a potential candidate, Avenatti is seeking to create an image as a product of the American heartland. “That’s why I’m very dangerous to this president — that’s exactly why the last thing in the world this guy wants is to run against somebody like me,” he told TIME. “Because I can talk to those people, and whoever the Democratic nominee is better be able to talk to those people.”

Whether or not Avenatti’s on the stage, the 2020 contenders will be debating this point. 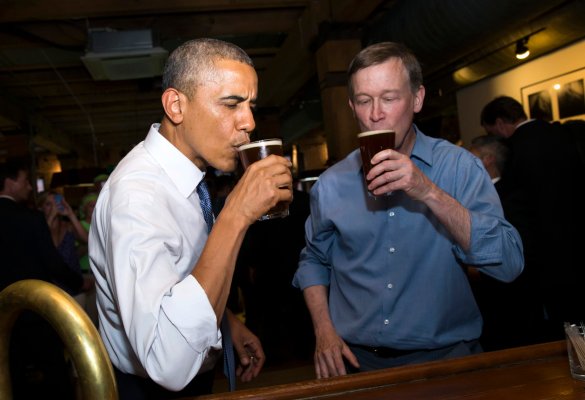 Is Colorado Gov. John Hickenlooper the 'Antidote to Trump'?
Next Up: Editor's Pick