It's Not Time to Despair Over the Terrible Jobs News—Yet

Prospective job applicants wait in line to learn about job openings at the Kentucky Kingdom Amusement Park during a job fair at the nearby Crowne Plaza Hotel in Louisville, Ky., Jan. 4, 2013.
Luke Sharett—Bloomberg/Getty Images
By Christopher Matthews

With today’s lackluster jobs report, the Labor Department is now estimating that the economy added an average of 94,000 jobs per month in December and January, which is barely enough to keep up with population growth. Combine that with recent data showing weak auto sales, construction and manufacturing activity, and there’s plenty of evidence that we have a slowing economy on our hands.

So should we be worried? Probably not just yet. Economists are quick to warn against drawing any hard conclusion from any one or two data points–it’s the long-term trends are the real gauge of the economy’s health. Furthermore, there is reason to believe that the inclement weather plaguing much of the country this winter has put a damper on economic activity, an effect that will be reversed as things start to warm up.

As Kathy Bostjancic, an economist with the Conference Board, wrote this morning, the second straight month of disappointing jobs number is cause for concern, but, “We expect that an eventual return to more normal weather conditions will allow job gains to rebound back towards their previous 180,000 – 200,000 trend pace.” Doug Duncan, Chief Economist at Fannie Mae agrees, writing, “Today’s report did not change our view that economic growth will pick up modestly this year, boosted by private sector activity.”

So why aren’t economists changing their views in the face of data which seems to show a deceleration of the recovery? First of all, the monthly estimate of job growth by the Labor Department has a very large margin of error, somewhere around 90,000 jobs per month. That means that when the Labor Department estimates that the economy added 113,000 new jobs in a month, what it’s really saying is that it’s 90% certain that the economy added between 23,000 and 203,000 jobs.

Secondly, other data, like initial jobless claims, don’t corroborate the idea that the jobs recovery is slowing down. Yesterday’s jobless claims report and recent GDP growth data show a much stronger economy than is suggested by the Labor Department jobs data. Jim O’Sullivan, Chief Economist with High Frequency Economics, wrote in a note to clients this morning that though today’s report was disappointing other data are strong enough to make him “expect a catch up in the coming months.”

In other words, it’s not quite time to freak out yet. One more bad jobs report next month, however, and it might be time to worry. 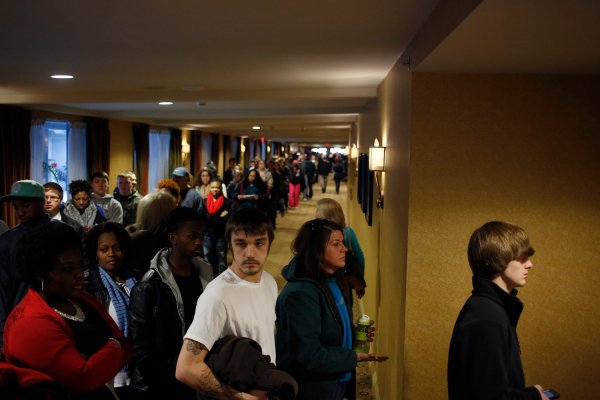