Why the Fear of Immigrants Is Un-American

Ideas
By Joe Kennedy III
Kennedy represents Massachusetts in the U.S. Congress and is the grandson of Senator Robert F. Kennedy.

My father has a memory of my great-grandmother Rose that he shares from time to time. He was outside playing with his sister Kathleen one day when she called them back home. She led them to a small room and dug out a big photo album. My dad was sure that she was going to make them sit there and go through old family photos for hours. A young boy at the time, he squirmed and looked longingly out the window at his Cape Cod summer day.

But Grandma Rose quickly flipped to the very back of the album and pulled out a stack of carefully folded, faded newspapers. One after another, she opened them up to the Help Wanted section. There, she handed him ad after ad marked with big block letters: NO IRISH NEED APPLY.

Her message was clear: this is where you came from. This is who you are. This is the pain, sweat, and tears that generations before you bore, so you would never feel the sting of prejudice. And this is the responsibility you inherit today.

For generations of my family, immigration reform became a personal fight. Few felt it as deeply as President John F. Kennedy. In his 1964 book A Nation of Immigrants, recently re-released, my great-uncle outlines the compelling case for immigration, in economic, moral, and global terms. “The abundant resources of this land provided the foundation for a great nation,” he writes. “But only people could make the opportunity a reality. Immigration provided the human resources.” Cultivating, challenging, and caring for that most precious resource became the cause of his life.

Two months after his election, President Kennedy came home to Boston to deliver his farewell address to Massachusetts. In a nod to the words of John Winthrop and the plight of those who first took the perilous journey to our shores, he echoed the expectations that have become synonymous with the American name. “Today the eyes of all people are truly upon us,” he said, “and our governments, in every branch, at every level . . . must be as a city upon a hill, constructed and inhabited by men aware of their great trust and their great responsibility.”

Eighteen years later, another president would summon the words of Winthrop in his farewell address to the American people:

“I’ve spoken of the shining city all my political life, but I don’t know if I ever quite communicated what I saw when I said it,” said Ronald Reagan. “But in my mind it was a tall, proud city built on rocks stronger than oceans, windswept, God-blessed, and teeming with people of all kinds living in harmony and peace; a city with free ports that hummed with commerce and creativity. And if there had to be city walls, the walls had doors and the doors were open to anyone with the will and the heart to get here.”

In moments of great reflection, transition, and vulnerability, great men saw the American story not through the lens of politics or tribe. They saw it as it surely looked to John Winthrop and every weary traveler who has ever approached American shores — rocky, imperfect, and unknown, but expansive, limitless, and defiantly hopeful.

Since the beginning, immigration has been an affirmation of our success, not a threat to it. People risk everything to reach this land because they believe in our greatness — our fair laws, our good values, our promises and possibilities. We should not worry when the striving and suffering arrive on our shores; we should worry when they stop coming at all.

Today that legacy — our legacy — is being threatened, by the same chorus that met President Kennedy when he had the boldness to tackle the racialized quota system. Their voices sound familiar: Immigrants will flood our cities and towns. They will take our jobs. They will threaten our culture. They aren’t from here. They aren’t like us.

Hundreds of immigrant children remain separated from their parents on American soil. They showed up at our border terrorized, desperate, and afraid. And in an act of unimaginable brutality, our government responded with terror of its own — taking infants and toddlers out of their families’ arms. Outrage forced the current Administration to abandon this vicious policy but has not deterred their attempts to criminalize those seeking refuge on our shores. Today thousands more families fleeing unspeakable violence at home are marching towards our southern border. And all this government has summoned to meet them is cruel words, course threats and the specter of more innocent children forced to watch their parents dragged away.

This is the human wreckage of American immigration policy. This is the trauma and torture that dark forces of nativism, supremacy, and prejudice have brought to bear in a land that staked its name on brighter, better things: equality, dignity and freedom.

This is the work that lies ahead, daunting and dangerous, but familiar, as President Kennedy reminds us in the pages that follow. We have been here before. We have spent generations battling those who would make America sharp and small and scared. We have risen, we have challenged, we have dragged ourselves toward a more perfect union.

We have done that by seeing a little of ourselves, our history, and our experience in others’ eyes. By choosing compassion and mercy and grace — not just because they are right, but because they are smart. Because we are richer and stronger and freer when we aim for less suffering, less trauma, less poverty, less prejudice.

There’s a great story that makes its way around Irish-American quarters here in Boston. In the midst of the Great Hunger in Ireland, the Choctaw Indian tribe of Oklahoma heard about the plight of the Irish; read about starving women and children dying along the roads, their mouths stained green with the grass they ate in desperate search of nourishment.

They collected $170 and sent it to Ireland for famine relief, mindful of their own struggles and the Trail of Tears that had led them less than 20 years earlier to their new home in Indian Territory. From the painful lessons of their own past, they were called to help people they didn’t know, who looked different, spoke different, were different. But who suffered just the same.

Today we summon that example. We summon the feelings of fear, loss, desperation, and isolation that visit each of us in different ways no matter our privilege or protection. In that shared humanity we find our empathy. We find our strength. We find the proud and dusty pages of our story that prove ours is a country unafraid to open, extend, and expand. We find our voices — like the hundreds of thousands of Americans who have risen up in response to the current immigration policies and said: No. Not on my land. Not in my name.

They have donated money and time and skills to reunite broken families. They have fostered young children left alone on our shores. They have taken to the streets and the courts, state legislatures and halls of Congress, to demand something better, fairer, kinder, and stronger from the government that represents them.

President Kennedy would be proud. It is the call not just to action but to decency that echoes today. It is the confident, charismatic country he believed in. Most important, it is the simple Gospel he knew would bind us to each other through time and space and generations — no matter creed or country, color or class.

Adapted from the book A Nation of Immigrants by John F. Kennedy. Copyright © 1964, 2008, 2018 by the Anti-Defamation League. Published on October 16, 2018 by Harper Perennial, an imprint of HarperCollins Publishers. Reprinted by permission. 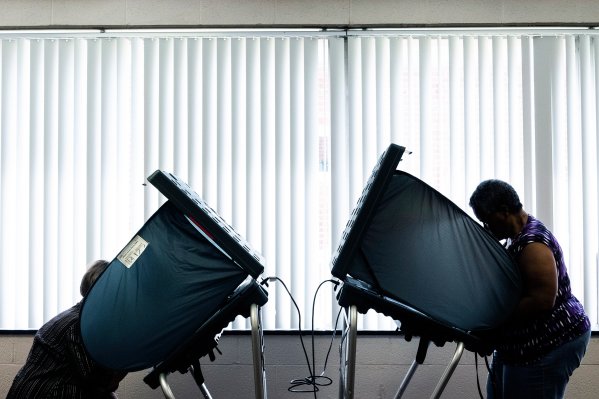 Vote Like It Matters. Because Then It Will
Next Up: Editor's Pick