TerrorismPresident Trump Says Sudan to Be Removed From U.S. List of State Sponsors of Terrorism

On Friday, the FBI said a further package had been recovered in Florida that was addressed to Democratic Sen. Cory Booker of New Jersey. NYPD confirmed a suspicious package had been found at a Manhattan post office addressed to James Clapper, the former Director of National Intelligence and critic of President Donald Trump, taking the total number of packages to 12.

The #FBI has confirmed an 11th package has been recovered in Florida, similar in appearance to the others, addressed to Sen. Cory Booker.

Miami-Dade Police said Thursday that they were assisting federal partners in an investigation at a U.S. Postal Service mail facility in Opa-locka, Florida. A bomb squad and K-9 unit were involved in the investigation.

No one was hurt by the string of alarming incidents carried out two weeks before midterm elections. A Post Office official said at a press conference Thursday that investigators looking for other bombs have found nothing in the last eight hours.

Already facing criticism for his disparaging rhetoric about the fourth estate, President Donald Trump told supporters at a Wisconsin rally on Wednesday that the media is partly to blame for societal divisions that spilled into full view this week. The remarks came hours after he told reporters at a White House press briefing that "acts of threats or political violence have no place in the United States of America," calling for "unity."

“The media also has a responsibility to set a civil tone and to stop the endless hostility and constant negative and oftentimes false attacks and stories," Trump said to a cheering crowd.

"A very big part of the Anger we see today in our society is caused by the purposely false and inaccurate reporting of the Mainstream Media that I refer to as Fake News," he said in a tweet Thursday morning. "It has gotten so bad and hateful that it is beyond description. Mainstream Media must clean up its act, FAST!"

“The president, and especially the White House press secretary, should understand their words matter,” said Zucker, the president of CNN Worldwide. “Thus far, they have shown no comprehension of that.”

The packages — which have been sent to the FBI Laboratory in Quantico, Virginia for analysis — were all similar in appearance, the FBI said.

Although the motive behind the packages and the identity of those responsible are not yet known, the individual recipients are high-profile Democrats, many of whom have been been critical of the Trump Administration, and a media outlet that is a frequent target of Trump's ire during rallies and on Twitter.

CNN received a further scare Thursday evening when part of the Time Warner Center mall in Manhattan was evacuated as authorities checked out a report of two unattended packages, the Associated Press reported. The Time Warner Center houses CNN headquarters in New York. The New York Police Department later confirmed on Twitter that "the report of a suspicious package at the Time Warner Building has been investigated by NYPD officers and has been deemed SAFE, no hazardous items found."

Here's what to know about the suspicious packages sent to prominent politicians and CNN this week:

Packages were sent to the Obamas, Clintons and other Democrats

At least 10 similar packages were sent to prominent Democrats or Democratic supporters and recovered between Oct. 22 and Oct. 25. They were mailed in manila envelopes with six Forever stamps and the Florida address of former Democratic National Committee (DNC) Chair Debbie Wasserman Schultz on the return label, containing "potentially destructive devices," the FBI said.

Brennan is a Trump critic whose security clearance was revoked by the President in August, and De Niro has publicly condemned the president, saying "f**k Trump" at the Tony Awards this year.

“This investigation is of the highest priority for the FBI," FBI Director Christopher Wray said in a statement. "We have committed the full strength of the FBI’s resources and, together with our partners on our Joint Terrorism Task Forces, we will continue to work to identify and arrest whoever is responsible for sending these packages."

The packages were immediately identified during routine mail screenings as potential explosive devices. There was no risk of Clinton or Obama receiving the packages, the Secret Service said in a statement.

At an event in Florida, Clinton told a crowd: “We are fine thanks to the men and women of the Secret Service.” She added: "But it's a troubling time, isn't it?"

The packages set off safety concerns and caused evacuations in political offices around the country Wednesday.

In Florida, two offices for Wasserman Schultz were evacuated after one of the suspicious packages was sent to her. It was addressed to Holder, but had the Florida Congresswoman's address on the return label, the Associated Press reported.

"We will not be intimidated by this attempted act of violence," she said in a statement later Wednesday. "This appalling attack on our democracy must be vigorously prosecuted, and I am deeply disturbed by the way my name was used."

CNN's offices in New York City were evacuated after one of the packages was found there — an incident New York City Mayor Bill de Blasio described as an "act of terror attempting to undermine our free press and leaders of this county through acts of violence."

A field office for Sen. Kamala Harris in San Diego, Calif., was also evacuated Wednesday after suspicious packages were found near the building, though they were not addressed to the Senator or her office.

“We listened with great interest to the President’s remarks this afternoon. We all take an oath to support and defend the Constitution and protect the American people, and that is our first responsibility," they said in the statement. “However, President Trump’s words ring hollow until he reverses his statements that condone acts of violence. Time and time again, the President has condoned physical violence and divided Americans with his words and his actions: expressing support for the Congressman who body-slammed a reporter, the neo-Nazis who killed a young woman in Charlottesville, his supporters at rallies who get violent with protestors, dictators around the world who murder their own citizens, and referring to the free press as the enemy of the people.”

CNN Worldwide President Jeff Zucker went further in his admonishment of the administration.

"There is a total and complete lack of understanding at the White House about the seriousness of their continued attacks on the media. The President, and especially the White House Press Secretary, should understand their words matter. Thus far, they have shown no comprehension of that."

At an event Wednesday night, Brennan also faulted Trump for rhetoric that promotes violence, criticizing "a continued failure on the part of Donald Trump to live up to what I think should be all of our expectations of what an American president should be doing."

"Unfortunately, I think Donald Trump, too often, has helped to incite some of these feelings of anger, if not violence, when he points to acts of violence or also talks about, you know, swinging at somebody from the press," Brennan said, adding: "If I and others are being targeted because we are speaking out and we're living up to our responsibilities as citizens, I think that, again, is a very unfortunate turn of events."

President Trump calls for unity and lashes out at media

"The federal government is conducting an aggressive investigation, and we will find those responsible, and we will bring them to justice, hopefully very quickly," Trump said at a rally in Wisconsin on Wednesday night. "Any acts or threats of political violence are an attack on our democracy itself. No nation can succeed that tolerates violence or the threat of violence as a method of political intimidation, coercion or control. Such conduct must be fiercely opposed and firmly prosecuted."

But he also blamed the media for the state of civility in American politics, calling on the press to "stop the endless hostility and constant negative and oftentimes false attacks and stories.”

White House Press Secretary Sarah Huckabee Sanders — who condemned the "cowards" behind the pipe bombs — also pushed back against any suggestion that Trump's rhetoric had escalated political tension.

"It is absolutely disgraceful that one of the first public statements we heard from CNN yesterday was to put the blame and the responsibility of this despicable act on the President and on me, personally, when person that is responsible for this is the person who made and created and put these suspicious packages in the hands and in the arms of innocent American citizens," Sanders told Fox News on Thursday.

"There's a big difference between comments made and actions taken," she told reporters outside the White House on Thursday. 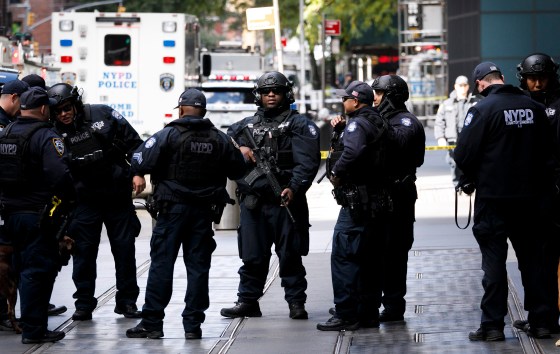 JUSTIN LANE—EPA-EFE/REX/Shutterstock Police officers work the scene after an explosive device was found at the CNN offices in New York on Oct. 24, 2018.