In front of thousands of supporters packed into in the Houston Toyota Center, President Donald Trump talked up his one-time rival Ted Cruz and starkly laid out his version of the choice voters face in the midterm elections on Nov. 6. Trump boiled it down to a slogan short enough to fit on a single Teleprompter screen: “Republicans produce jobs, Democrats produce mobs.”

In the final days before the midterms, Trump has been an active campaigner for Republican congressional candidates, dominating the news cycle by hosting multiple rallies per week in states around the country. This week alone, Trump will visit at least three states for rallies: Texas, Wisconsin and North Carolina. White House officials are planning to increase that pace in the final stretch next week.

“One of the assets I have is I’m able to speak to people in tremendous numbers,” Trump told TIME this month of his power in the midterms, calling from Air Force One on his way to an Oct. 10 rally in Erie, Pa. “We have thousands of people lined up outside right now trying to get in. But I’m able to speak to them and often times it’s on live television, you understand. So I’m able to get my word out.”

Read More: How the Midterms Will Test Trump’s Hold on the GOP

With just two weeks to go and Democrats holding a nine-point lead among likely voters over Republicans in congressional preference, according to a recent NBC News/Wall Street Journal poll, it’s time for the president to, as he might say, close the deal. A pattern has emerged of his closing arguments to voters on why they should vote for Republicans instead of Democrats. He enumerated it himself at a rally in Montana on Oct. 18: “This will be an election of Kavanaugh, the caravan, law and order and common sense,” he said. The midterm results will test whether his stark, misleading rhetoric hit the right notes or pushed too far.

Here’s a look at three of the president’s main pitches to voters in the home stretch of midterm campaigning.

Democrats are ‘the mob’

Trump has employed one of his favorite tactics against an opponent, this time against Democrats as a whole: coming up with a damaging nickname to brand an adversary. His new moniker for the Left is “the mob.”

At stake in this election, Trump told a cheering crowd in Houston, is continued prosperity under his policies, “or we let the radical Democrat mob take a giant wrecking ball and destroy our country or our economy.” The Democrats, he went on, “want to replace the rule of law with the rule of mob.”

It’s a phrase he’s used like a hammer in recent weeks, attempting to frame high-profile protests in the nation’s capital against a Republican health care bill, Supreme Court Justice Brett Kavanaugh’s confirmation and other issues as beyond the pale.

“The Democrat party has become an angry, ruthless, unhinged mob determined to get power by any means necessary,” Trump said at a rally in Elko, Nevada, on Oct. 20.

“You don’t hand matches to an arsonist, and you don’t give power to an angry left-wing mob, and that’s what they’ve become,” Trump said during a Kansas rally the day Kavanaugh was confirmed to the Supreme Court.

The “mob” branding contributes to the overall pictures of the Democrats that Trump likes to paint: that their policies foster crime and that, were they to take control of Congress, they would be dangerous for America. In Ohio on Oct. 12, Trump said, “Republicans believe in the rule of law, not the rule of the mob.”

One specific pitch Trump often makes to voters is that Democrats are soft on issues like illegal immigration. This was Trump’s signature issue during the 2016 presidential election, and he continues to think it will be a winning strategy in 2018. Trump has repeatedly blamed Democrats, without evidence, for a migrant caravan headed to the U.S. “I think the Democrats had something to do with it,” Trump said Monday night. “That’s an assault on our country,” he said.

On Oct. 21, Trump tweeted that the caravan is a “disgrace” to the Democratic Party. In a tweet the following day he added, “Remember the Midterms!”

And, to contribute to the “mob” idea that Democrats shouldn’t lead, Trump has placed the blame for the faults in America’s immigration laws on the Party’s congressional leaders, calling Senate Minority Leader Chuck Schumer and House Minority Leader Nancy Pelosi “obstructionists” on the issue, although immigration bills failed in the Republican-led Congress during the Trump Administration.

Trump’s attacks on the Democratic Party on immigration are all part of a broader theme, which he repeats often: “It is,” he said on Oct. 1 at a rally in Tennessee, “the party of crime.”

Trump famously rode into office on the slogan “Make America Great Again.” Now, he’s announced a new one for his reelection campaign: “Keep America Great.” As he denigrates Democrats at his rallies, he’s also making an affirmative case for why voters should punch the ballot for Republicans next month.

“Under Republican leadership, America is winning again. America is respected again, because we are putting America first,” Trump said in Houston. “We are taking care of ourselves for a change, folks.”

He often touts the booming economy, tweeting Oct. 21 that “Dems can never do even nearly as well!”

At a rally in Nevada on Oct. 20, Trump hinted that he and Republican lawmakers have been working on “a very major tax cut” for middle-income families. With Congress in recess before the election and few on Capitol Hill aware of what Trump is referring to, these hypothetical tax cuts couldn’t pass before Nov. 6, so bringing the plan up at a rally shows that Trump thinks the idea will energize voters for the GOP.

The success in confirming Kavanaugh and a raft of other conservative judges is another key selling point for Trump and Republican candidates. “The Democrats are even talking about doing really bad things now to Justice Kavanaugh,” Trump said at a rally in Iowa on Oct. 9. “Last week, they were saying, ‘We’ll impeach.'”

The president then joked: “I have to go first, right? Don’t I? — even though we’ve done nothing wrong other than create one of the greatest economies in the history of the world.”

It was said with a wink but encapsulates the most essential message to voters on both sides ahead of the midterms: vote for Republicans to protect Trump’s policies and power. Or vote for Democrats to undo it. 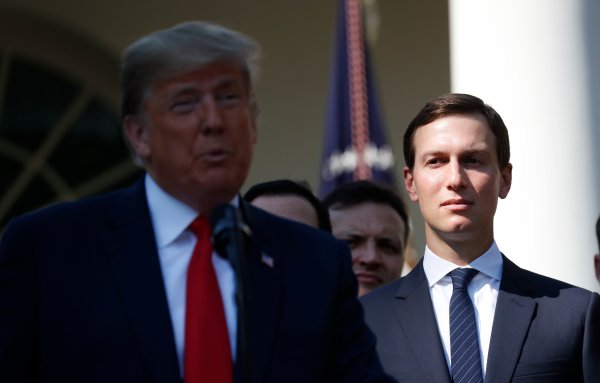 Kushner Says White House Is Still Gathering Facts on the Murder of Journalist Jamal Khashoggi
Next Up: Editor's Pick