'Weed the People’ Explores Medical Marijuana for Kids With Cancer

Weed the People
By Jamie Ducharme

Marijuana, both medicinal and recreational, is growing more mainstream. Medical marijuana is now legalized in a majority of states, and 62% of Americans support legalizing it outright — but in the political realm, the plant has long been controversial.

Now, a new documentary called Weed the People, which opens in some theaters in October, explores the potential of medical marijuana for childhood cancers and the regulatory hurdles facing people who want to use cannabis. The film, which was executive produced by former talk-show host Ricki Lake, follows five families using cannabis oils to treat pediatric cancers. Some of the children used cannabis alongside treatments like chemotherapy, while others turned to the drug after conventional treatments had failed.

Lake became interested in medical marijuana when her late ex-husband, Christian Evans, began researching cannabidiol (CBD) — a compound in marijuana that does not cause a high —for his own health issues, including chronic pain and ADHD. (Evans died by suicide last year.) The two met a young girl with a tumor disorder whose family was desperate to get her off chemotherapy, and they helped connect her with a doctor who specializes in medical marijuana. Lake and her production partner, director Abby Epstein, were inspired to find other families in similar situations and tell their stories on screen. They made Weed the People to explore the potential of medical marijuana, and the regulatory challenges families and researchers must overcome to use it.

“I want to get people seeing it as a medicine, seeing what it was able to do for these children, and fight for this medicine to be available to everyone who needs it,” Lake says. “It’s a human rights issue.”

The film paints a rosy, anecdotal picture of the effectiveness of cannabis oils; some of the children featured had their tumors shrink substantially or disappear entirely, even if they were using cannabis oils in place of chemotherapy and other conventional treatments. “You can’t say the ‘cure’ word,” Lake says, “but how else do you explain it?”

But the concept is far from proven and could even be dangerous. While there is some evidence that marijuana can ease chronic pain and chemotherapy side effects, the American Cancer Society (ACS) warns that “relying on marijuana alone as treatment while avoiding or delaying conventional medical care for cancer may have serious health consequences.” And while some studies have shown that compounds in marijuana can slow growth of or kill tumor cells in animals or lab dishes, evidence in humans — particularly around marijuana oils — is lacking, the ACS says. While conventional treatments like chemotherapy are still the standard, pediatric cancer providers are increasingly voicing their support for the use of medical marijuana, particularly in palliative or end-of-life care when other treatments may not be necessary.

More research is needed to learn about the potential effects and limitations of cannabis-derived medicines for both adult and pediatric cancers. As the families and experts in Weed the People see it, this lack of evidence is precisely the problem — and it’s exacerbated by current regulations around medical marijuana.

Marijuana, like heroin and LSD, is classified by the Drug Enforcement Administration (DEA) as a Schedule I drug, meaning it has “no currently accepted medical use and a high potential for abuse.” But in June, the FDA approved the first drug derived from marijuana, a purified version of CBD called Epidiolex, for kids and adults suffering from two rare forms of epilepsy; the DEA then rescheduled Epidiolex (but not CBD as a whole) to schedule V, the lowest restriction classification for controlled substances. Researchers who wish to study cannabis need a Schedule I drug license and must submit to background checks and site visits from the DEA.

The DEA also only permits one institution, the University of Mississippi, to grow marijuana for study, though DEA spokesperson Melvin Patterson says it is planning to grant additional licenses to other growers, which would “increase access to marijuana for researchers, potentially increase the number of available strains for research, and may foster additional research on marijuana.”

This means scientists are limited to studying only the products and formulations available from the University of Mississippi, which doesn’t include popular consumer products like vapes and edibles, says Dr. Jeff Chen, director of the University of California Los Angeles Cannabis Research Initiative. “At my office at UCLA, I look out my window and I can count two dispensaries that I can see,” Chen says. “We can’t touch that cannabis—not even to understand what’s in it.”

As a result of these challenges, many families who wish to use cannabis, including those in the documentary, are forced to buy it from sources outside the conventional medical system, and must trust that what they’re using is safe. “I just find it absolutely staggering to accept that in this day and age, with the billions of dollars that are spent on cancer research, the medicine we were relying on was made in somebody’s kitchen,” says Angela Smith in the film, whose son, Chico, uses cannabis oils to treat his soft tissue cancer.

Chen, who was not in the film but shares its frustration with current marijuana regulations, became swayed by the medical potential of cannabis compounds early in his career, when he encountered a young patient with epilepsy whose parents were treating her with CBD. Unfamiliar with CBD, Chen and his colleagues almost called Child Protective Services to intervene—until Chen looked into the compound further and saw how much he didn’t know.

“That’s when I realized that science had completely left cannabis in the dark,” Chen says. “It was time for science to step up and really to push on this issue. I felt a duty.” Today, Chen works to understand the health benefits and risks of marijuana and its many compounds, including CBD.

The film also touches on funding challenges associated with marijuana research, an impediment Chen has encountered with his own research. While the government does fund some marijuana research, Chen says the “vast majority” of federal dollars go toward understanding the harms of cannabis, not the potential benefits. Researchers who wish to study how marijuana may improve treatment for conditions ranging from cancer to chronic pain are largely left to find the money themselves, Chen says.

These roadblocks have led many researchers, including those quoted in the film, to call for looser marijuana scheduling, but the DEA denied two such petitions in 2016. Dr. Igor Grant, director of the Center for Medical Cannabis Research at the University of California San Diego, who was not in the film, agrees that current regulations have made research more difficult, and says marijuana probably doesn’t belong in schedule I. But he says he doesn’t believe that the government is actively trying to stifle cannabis research, as many people—including some in Weed the People—have alleged.

Grant says there’s some evidence that the barriers are becoming fewer. His lab recently made history by importing research-approved marijuana from Canada, a move that suggests U.S. researchers may soon have greater access to the plant. That access, combined with lighter regulations from the government, could open new doors, Grant says.

“You would have to both reschedule it and increase the availability of manufacturers,” he says. “This could be a joint effort between states, manufacturers, academia and federal [regulators].”

This type of collaboration is crucial, Lake says, and she hopes her documentary will garner public support for it. “I’m really hoping to reach the people who really have this idea that this drug is bad,” Lake says. “It’s a matter of just changing mindsets and having them fight to have access to this plant. I do believe change is coming.” 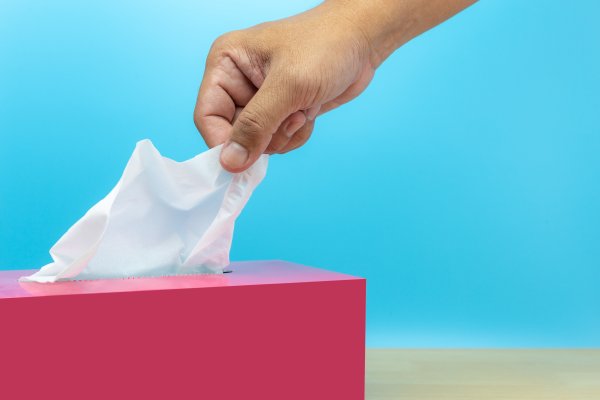 The FDA Just Approved a New Flu Treatment
Next Up: Editor's Pick