President Trump called out the Democratic Party in relation to the migrant caravan making its way through Central America on Twitter on Sunday.

“The Caravans are a disgrace to the Democrat Party. Change the immigration laws NOW!” the President tweeted.

The President seemed to draw a connection between the Democratic Party and the group of an estimated 5,000 migrants in terms of immigration policy. The GOP currently controls the presidency and both houses of Congress.

The caravan of mostly Hondurans had been making its way through Guatemala, crossing over into Mexico last night, heading for the United States. About 640 migrants have requested asylum in Mexico and 2,200 remain camped on a bridge connecting Guatemala and Mexico, according to statements by the Mexican Government.

In a separate tweet Sunday, President Trump also alluded to an unspecified court that he claimed had asked the United States to do things that were not possible in relation to the migrants.

“People have to apply for asylum in Mexico first, and if they fail to do that, the U.S. will turn them away,” the President tweeted. “The courts are asking the U.S. to do things that are not doable!”

Sunday’s tweets were the President’s latest attacks on Democrats blaming them for illegal immigration. In the lead up to the 2016 election, the then-candidate had also made the threat of illegal immigration one of the central issues of his campaign.

The President has referred to the caravan more frequently over the last week, possibly looking to draw attention to the approaching migrants as an issue to turn out voters for Nov. 6’s midterm elections. 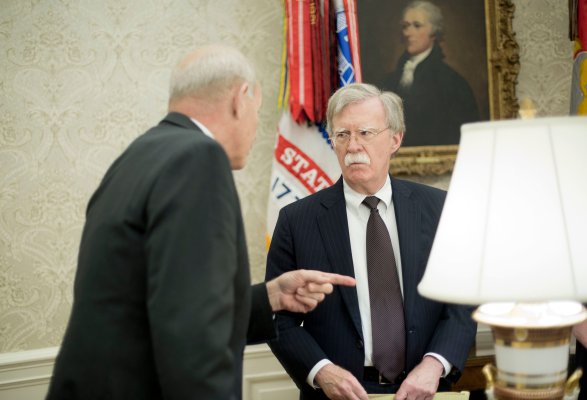 Bolton and Kelly Argue Over Immigration at White House
Next Up: Editor's Pick