I’m a Young Saudi Journalist. Jamal Khashoggi’s Disappearance Will Not Silence Us

When news broke out that Saudi journalist Jamal Khashoggi reportedly met a tortuous end at the hands of agents of a country I hold so dear, I fell into despair. Not only would these details be gruesome for any decent human being, but I had a personal and professional connection to what Khashoggi’s plight was for. I’m a Saudi journalist living in the West. I grew up in Saudi Arabia and was taught by its school system. I still have an immense love for the country that raised me. I also am not ignorant, however, of the very real consequences for angering powers that stealthily hover over us from all directions.

I graduated from a Saudi high school a few months before 9/11. Despite hesitations from friends and relatives, I went to university in Miami, where my Cuban grandmother lived. I graduated with degrees in studio art and journalism. The reason I chose those two majors was because I knew my country lacked those professions and, like many Saudi women, I was a quiet rebel. I knew the Saudi people had so many stories to tell, and I wanted to be the one to tell them. As Khashoggi mentioned in his final Washington Post column, published posthumously, we in the East read about ourselves in the Western papers.

I had neither the talent nor the ego to be a famous artist, so I settled on another medium: Journalism. My art became telling other people’s stories. In 2013, my classmate and I became the first two Saudi women to ever graduate from the Columbia Journalism School, which has existed for more than 100 years. (Two men graduated in the years before us.) This is significant because it shows that most Saudis didn’t see journalism as a viable form of expression. It certainly wasn’t a profession most pursued willingly, especially in the West.

Because I am a journalist, though, this week has left me speechless — but not voiceless.

Before the news of the mysterious question mark over the end of Khashoggi’s life, I was elated at the launch of a yearlong initiative in New York City, my adopted home, that would bring Arab artists to tell their Eastern stories to a Western audience. It’s titled New York/Arab World Art & Education Initiative. The major New York City museums participating in the initiative will not use Saudi funds for its programs.

I had written about many of the artists for nearly a decade in different platforms and formats, but I was finally seeing a bit of home in my other home. Like a music journalist becomes kind of a groupie, I considered anyone in this niche circle to be friends and an extended family. Many of us were scared to ruffle feathers but were eager to try to fly anyway.

The timing, however grim, has a poetry to it, because Jamal Khashoggi unknowingly launched the initiative. Under the backdrop of the early days of the last Gulf War in 2003, Khashoggi, then still the editor at the Al Watan newspaper in Saudi Arabia, introduced artists to each other who later formed a collective centered on Arab art globally, called Edge of Arabia. Many of those artists are now taking part in the New York/Arab World initiative. Edge of Arabia’s non-Saudi co-founder, Stephen Stapleton, mentioned his personal connection to Khashoggi in his opening speech at the official launch of the forum. Stapleton, a former educator, is in many ways leading the way to strengthen the dialogue between Saudis and non-Saudis via this platform on a global scale. For the last decade, Edge of Arabia has created programs and artist residencies, many of which were created and amplified by Stapleton.

“[In 2003,] I had crossed the border from Yemen into Saudi Arabia on a public bus and was dropped off under the light of a neon palm tree. Jamal was the first person I met in Saudi Arabia,” Stapleton told the hushed crowd.

“We have been under some pressure to postpone or cancel this program in light of the terrible news about Jamal Khashoggi and our organization’s long-term connections with Saudi Arabia,” he said. “We collectively decided to move forward with the initiative. With Jamal and his family in our thoughts and prayers, we want to reiterate our commitment to amplifying the voices of artists trying to make the world a better place and getting their voices out into the public domain.”

There are so many narratives in the Arab world that deserve a larger life. Kuwaiti curator Razan Al Sarraf opened a show centered on Young Arab Artists two nights ago at a converted nightclub in the Meatpacking District. She didn’t shy away from painting 100 portraits of ISIS terrorists; giving us all a chance to pause and reflect on how those faces got there to begin with. Social stigma and isolation prompted those individuals to join this cult, and social media was likely the tool that was used to lure them in. She mentioned on the Asia Society panel on Oct. 16 that she knew that, living in the West, she could say and do art that wouldn’t be “allowed” in her home country.

Similarly, while we Saudi women are elated that we can now legally drive, it was more fundamentally freedom of movement that we needed most. At a deep level, our joy was really about being able to use our own voices to tell our narratives and have the space to explore those feelings. Saudi, like many Arab countries, is a complex and sometimes contradictory place. And although many of us Arabs living in the West have gotten comments about losing our “Arab card” by leaving, the common thread is that we usually hold a pure love for the country in which we were raised.

Let us not allow Khashoggi’s life to end in vain. Although prompted by tragedy, dialogue is what I have wanted my whole life. I believe that the next true revolution will come in the form of paintbrushes, pens and pixels. Among this negativity in the Arab and Western Worlds, there’s a burst of hope underneath. 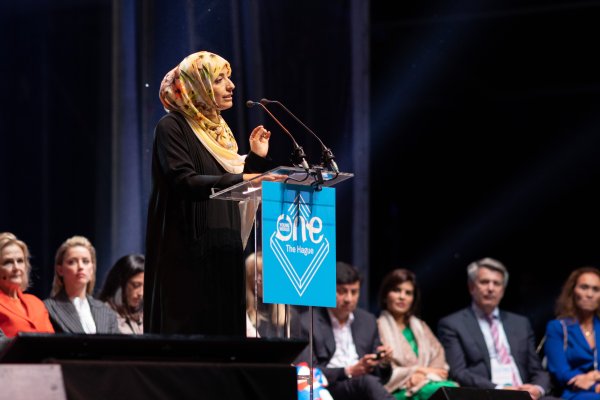 What Happened to My Friend Jamal Khashoggi Shows How Saudi Arabia Spreads Fear and Buys the West's Silence
Next Up: Editor's Pick